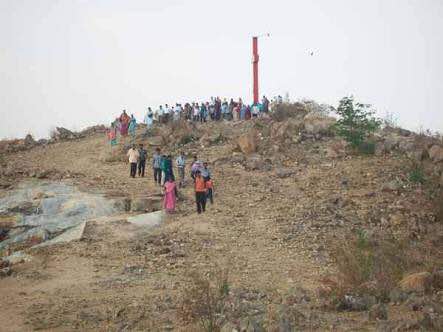 Cross planting and illegal encroachment of lands by missionaries have been a threat which has been continuously ignored by secular government for vote bank politics. While the temple lands and administration have been taken over by the secular government, the administration of churches, which are reportedly the largest owner of non-agricultural land in Bharat, still lies with the Christian missionaries who use this income mainly for illegal conversions and encroachment. One such place which is currently being affected by this attempt of encroachment by the missionaries through cross planting is the Hanumagiri Betta, a small hillock in the suburbs of Bangalore.

Hanumagiri Betta is famous for the Sri Hanumagiri Kshetra which is a small and ancient Hanuman temple present on top of the hill. Legend states that the Hanumagiri hill is a part of Sanjeevini mountain which was dropped by Sri Hanuman when he was carrying it to Lanka for curing Lakshmana. The hill hosts three temples, namely Sri Arkeshwara temple, Sri Ganapati temple and Sri Mukhyaprana (Hanuman) temple.

But by around 1950, Christian missionaries had started taking over the hill. At this time, a priest of St. Joseph’s Church established a huge steel cross on the hill top and called for all the believers of Christ to come to “Annamma Betta” on the 5th Sunday of the Lent for a mass and ‘way of the cross’. That day onwards, on the 5th Sunday of the Lent every year the ‘Annamma Betta’ swells with huge gathering of folk and a big fair is held. Catholic Christians perform the ‘way of the Cross’ along the 14 stations marked en-route.

The Christian extremists today have even renamed the hill as ‘Annamma Betta’ and established a historically baseless story of Annamma, claiming her to be a young girl who committed suicide to save herself from the army of Tipu Sultan, and on whose grave the steel cross is planted. While the Hindus who are largely tolerant in nature, accepted the co-existence of Christians on the hillock, some Christian extremists coming to the spot have been creating disturbances to the temple.

The fair on the fifth Sunday of the Lent is attended by a large number of Christians, some of whom created nuisance to the Hindus visiting the temples by lighting candles on the way to the temple as a practice of worshipping the cross. A notice that was issued against illegal occupation of the land by cross planting, after several complaints by Hindus, is also being ignored by the secular state i.e. Government of Karnataka. 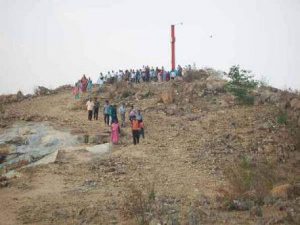 The attempt to rename Hanumagiri Betta as ‘Annamma Betta’ is also being slowly enforced by the Christian extremists through sign boards. Radical Christian groups have even created a separate wiki page apart from the original one about the hillock – they claim that the hill which is popularly known as ‘Annamma betta’ or ‘Yesu betta’ (Yesu = Juesus) is only now being called as Hanumagiri by certain groups (read Hindus). They further claim that two temples have come up on the hill only recently! And then they brazenly try to claim the high moral ground by saying that ‘Annamma Betta’ is enjoying the culture of unity in diversity. Mainstream media, of course, buys this subterfuge and routinely describes the hillock as a symbol of diversity and portray the Christian extremists as seculars who ‘tolerate’ the presence of the temple.

Sample this incredibly lopsided Deccan Herald report on the topic, which completely downplays the sacredness of the hillock for Hindus –

“Annamma Betta (hill) or Hanumagiri as known today is struggling to cope with the latter, land waiting to be turned into expensive apartments…..”

It is high time for Hindus to realize the dangers which are looming over their last public spaces which are present in the form of temples, and act in order to protect those spaces. Our places of worship are not only the abode of our Gods but are also the places where our Dharma thrived when the whole nation was under the cloud of invasion. It is time for Hindus to ensure the welfare of their own temples by reclaiming them from the dangers of secular government control and encroachment.