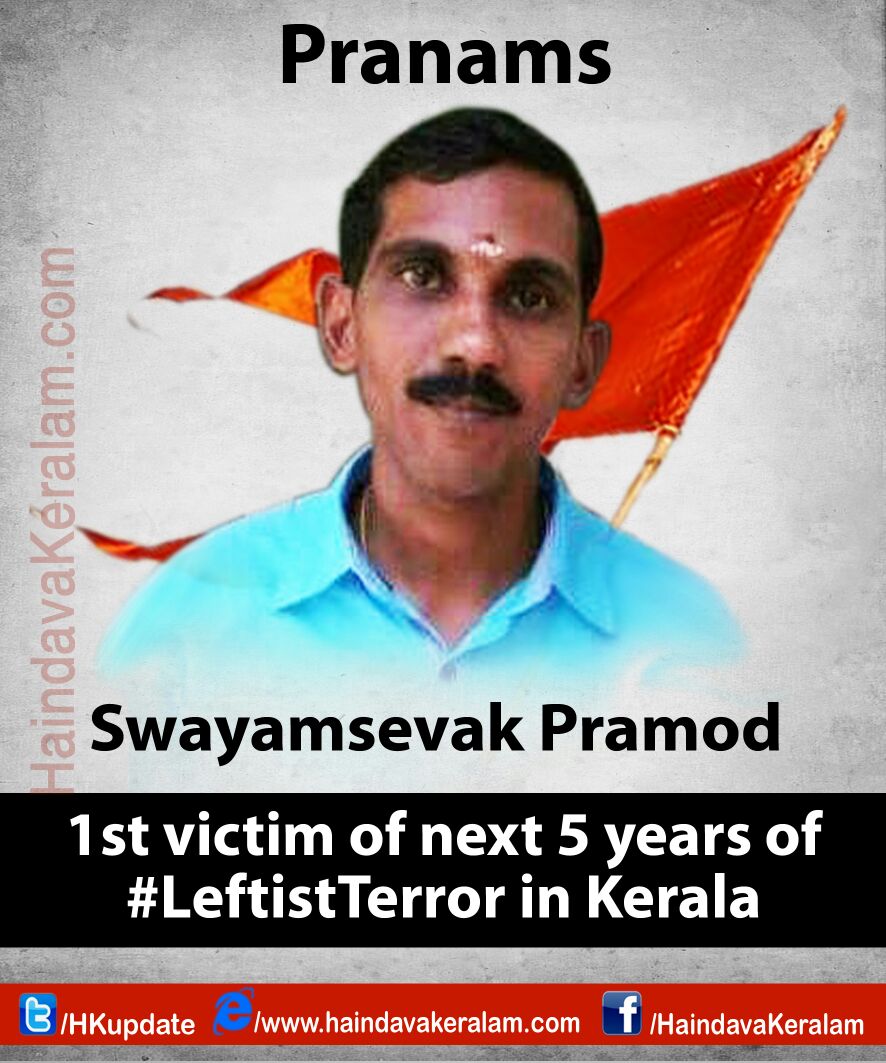 Providing a chilling trailer of what life under the just elected LDF regime led by CPI-M would be like for ordinary Hindus, CPM workers bludgeoned to death 33 year old BJP worker Pramod in Thrissur district of Kerala. This is another murder in a decades long reign of terror unleashed by the Marxist ‘revolutionary’ comrades against the people of Kerala, especially Hindus, who dare to support any ideology other than their own. Not surprisingly, this is not newsworthy for our secular-liberal national media who treat this wanton violence in Kerala as ‘routine political squabbling’ – this is not ‘intolerance’ as per their double standards.

Heartfelt sorrow and anguish over demise of our Karyakarta Pramod.CPM back with their violence spree.#CPMKills pic.twitter.com/CQrHzzpLlO

“The Communists have initiated their innings of violence from day one following their victory in the state Assembly elections of 2016. The BJP worker who sustained grievous wounds inflicted by Marxist marauders, has succumbed to his injuries. 33 year old Pramod was brutally attacked in the Marxist sponsored strife in Kayappamangalam, following victory of the local LDF candidate. He was undergoing treatment. The state unit of Bharatiya Janata Party has called for a dawn to dusk hartal in Thrissur district in lieu of the incident.

According to eye witnesses, following the victory of Kaippamagalam LDF candidate ET Tyson, gang of Marxist goons unleashed terror on a group of BJP Karyakartas, under the guise of victory celebrations. “The gang arrived in a tipper lorry and started bashing up Pramod and others who were with him. Pramod was bludgeoned with bricks, which led to head injury,” said eye witnesses under condition of anonymity.

Pramod was rushed to hospital, but succumbed to his injuries.”

For a change, senior leaders of BJP have taken serious note of this long-standing persecution of Hindu activists in Kerala. A Bharatiya Janata Party delegation under the leadership of Union Minister Nitin Gadkari met President Pranab Mukherjee on Sunday and expressed their concern over the post-poll violence in Kerala. They also appealed the President to look into the matter in which a BJP party worker was killed by CPI(M) workers during the ‘celebration’ rally in Idavilangu in Kerala on Thursday.

Our workers Suresh & Pramod were killed, situation there is not fine:Union Minister Nitin Gadkari on Kerala violence pic.twitter.com/iXX0NsHKeX

Even during the polling, intimidation & violence by CPM workers was routine. Here is a report on an assault on two BJP booth agents by CPM workers-

“The BJP has demanded the arrest of Trikaripur MLA K Kunhiraman in connection with the assault of two BJP booth agents at Chathamath in Nileshwaram on polling day.

The area is a CPM bastion with little presence of other political parties. Releasing a video shot on mobile phone on Wednesday in Kasargod, BJP district president K Sreekanth said hundreds of CPM workers rounded up his party’s agents at booth no. 27 and threatened and assaulted them. “The MLA made Sudheesh and Sagar (the booth agents) write a statement saying they will not indulge in political activities again,” said Sreekanth.

In the video, Kunhiraman is seeing waving a white paper and saying, “they have written and given that they would not indulge in political work” apparently to pacify the CPM mob. Unsatisfied, the mob made the two BJP workers repeat the words amid shouting of ‘Inquilab Zindabad’.”

This interview which was carried on OpIndia after it was conducted by a major newspaper but never published, and the answers to two questions in particular, reveal the true nature of the deadly Marxist fascism –

“Q1: May I please get statistics of how many such attacks have been carried out in the last five years?

Ans: In Kerala, 267 people related to the RSS were killed in the last 50 years, of which 232 were killed by the CPM. After 2010, sixteen RSS workers were murdered by CPM. The number of injured – with limbs chopped off, blinded, bedridden due to injuries – is almost six times the number of those murdered.

In between clashes, we have had open seasons for the brutality of ‘peace’- False cases foisted on our cadres; Police lock ups, beatings and worse.

Q6: Is there any other detail that you can share about the growing violent attacks against the RSS workers and what these are attributable to?

Ans: The RSS has the same pattern and methodology of work in Kerala as it has all over India. That is to say that we have consistently worked within the democratic system and tried to take the whole society along with us. We do not see the CPM or any other organisation as an ‘Enemy’. We have time and again appealed for peace and for the right to carry out or organisational work like any other outfit in the state.

Many independent researchers who have studied about the murder politics in Kerala, including the prominent Gandhian thinker Udayabhanu, have stated this fact categorically. However, the CPM in Kerala, after the collapse of communism world over, has chosen arrogance as a philosophy and violence as its tool.

You should know that it is not just the RSS that is targeted by the party. The CPM has attacked the Congress, IUML, and even its allies in the LDF – the CPI and the RSP. Last week, while a brutal attack was carried out on BJP cadres (including former state president Muraleedharan) at Trivandrum, a Congress worker (who had left the CPM earlier) was murdered at Alleppey by the party and a bomb attack by the CPM at Nadapuram injured 3 Muslim league workers.

When it comes to violence, the CPM is an equal opportunity party.”