Arun Nambiar, a CPM & ‘Kerala model’ supporter, crossed all limits of degeneracy on twitter and invited the wrath of netizens and authorities alike. A known psychopath, Nambiar was often found flaunting his barbaric communist views on twitter. Abusing Bharat, ‘upper-caste’ Hindus, advocating break-up of the country and spewing venom against Hindu Dharma was an everyday thing for Nambiar.

Mostly, he was ignored as people likened his rants to that of a mad man on the street. But, seeing how ordinary Hindus are being targeted in Bharat and UAE for expressing any opinion that goes against the Islamist & communist worldview, enraged Hindus decided to stop overlooking tweets by likes of Nambiar. And the results were immediate.

The sexually explicit suggestion made in the tweet is self explanatory, and the sly tweaking of the spelling of ‘Bharat’ is just a sorry attempt to escape responsibility for his actions. It is evident that the subject of his vulgar comment is ‘Bharat Mata’, the sacred embodiment of the nation which is held in respect by crores of citizens.

As Nambiar resides in Mumbai for work, the offensive tweet was reported by many to Mumbai police, and the police acknowledged from their official handle that its social media lab and cyber police station have been informed for necessary action.

But some determined netizens decided to make Nambiar pay a higher price than just a police cyber crime investigation. They reached out to his employer, Rhombus Studios Pvt. Ltd, to apprise them of the dangerous and psycopathic views held by a professional who was positioned as Vice President at their Andheri-based firm.

We do not subscribe to Arun Nambiar's post on social media. Digital Rhombus and its directors do not support views that are anti-national. We have taken the action of terminating his employment. We will support @MumbaiPolice for any further action to be taken.

“Digital Rhombus and its directors do not support views that are anti-national. We have taken the action of terminating his employment,” Rai wrote and committed his support to Mumbai Police for any investigation.

For our readers who are unaware of the disturbing views exhibited repeatedly by this communist troll, who uses different aliases, we would like to share some of his earlier posts. As we mentioned above, Nambiar is an ardent Hindu-hater, and has frequently shown genocidal tendencies. Affronting Hindu Gods comes naturally to him.

Here he calls for ‘forced sterilisation of ‘Upper castes’ in Rajasthan.

In another tweet, he exposes genocidal traits by asking for all ‘upper caste’ Hindus to be thrown in a Soviet-style Gulag. Gulags were forced labour camps set up in Soviet Russia where millions of innocents were killed by the the Communist regime. He then drags children in his mad rant and fantasizes about seizing them from their parents and turning them into ‘properties of the state’.

In other tweets, he demands that ‘Sanghis should be ‘hunted down like it is done in Kerala’, and calls Kerala a ‘Sanghi graveyard’. Sanghi, in the tweet, refers to workers of Rashtriya Swayamsevak Sangh, a nationalist organisation that is viscerally hated by Communists and other Breaking India operatives. Kerala is infamous for brutal murder of RSS workers at the hand of Communist goons. Not suprisingly, this genocidal tweet by Nambiar was retweeted by another notorious Islamist handle @imMAK02 that is currently involved in targeting Hindus working in the Gulf. 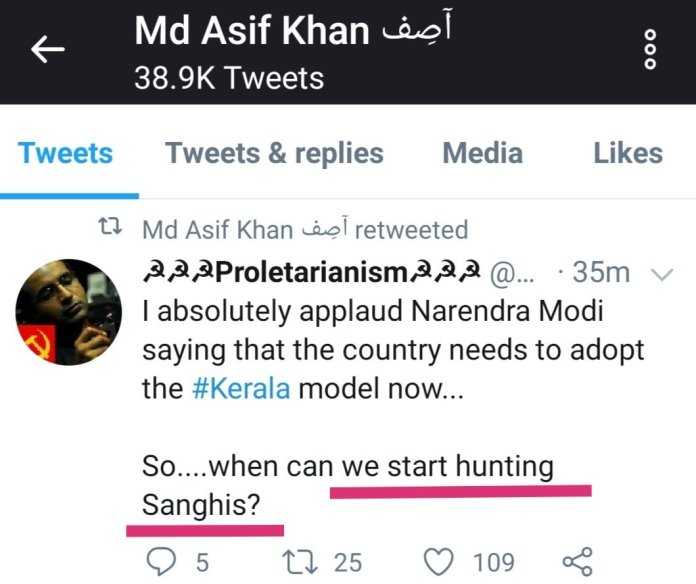 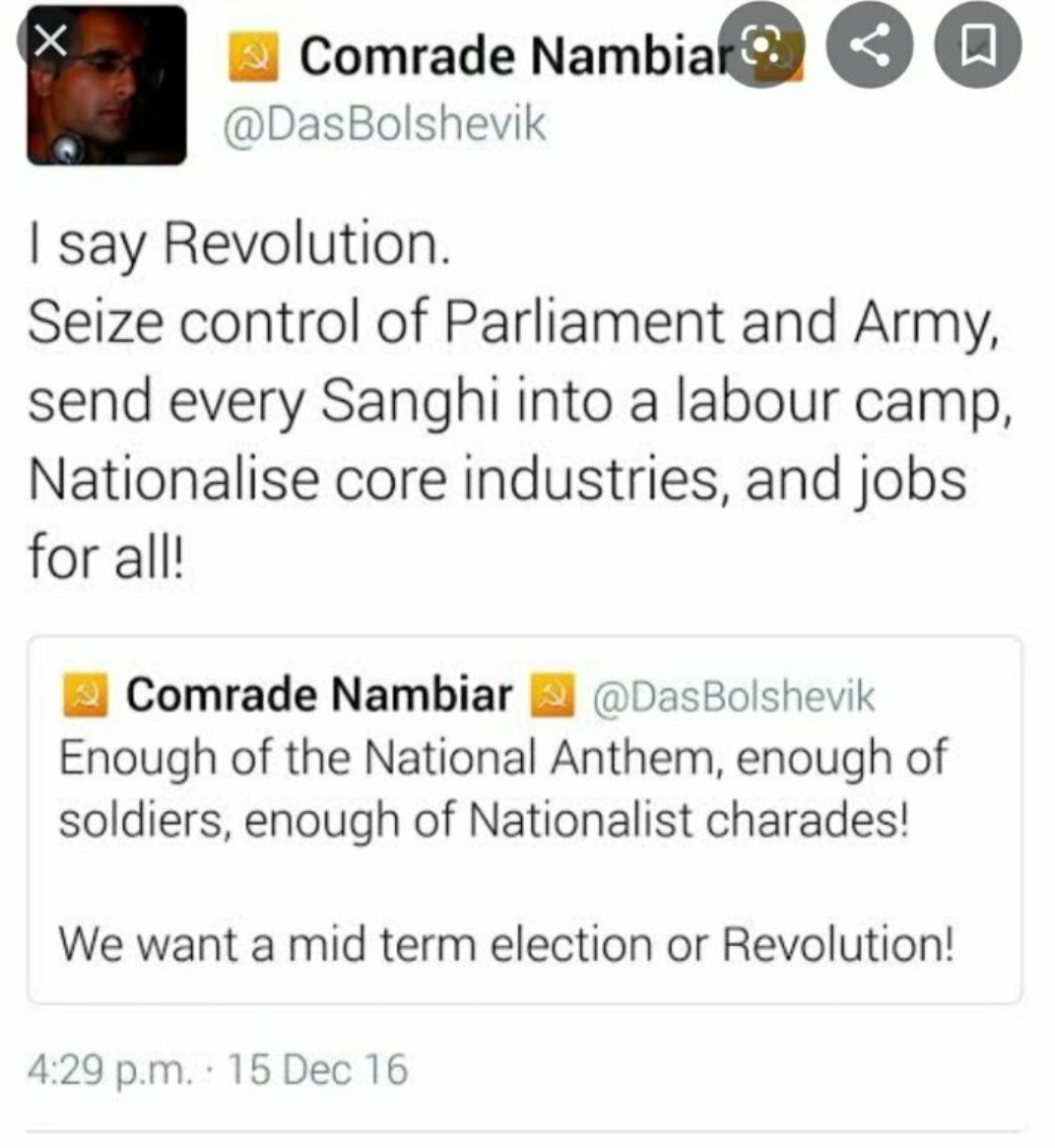 Arun Nambiar has also acknowledged discriminating against ‘upper caste and Sanghi’ Hindus in his job. 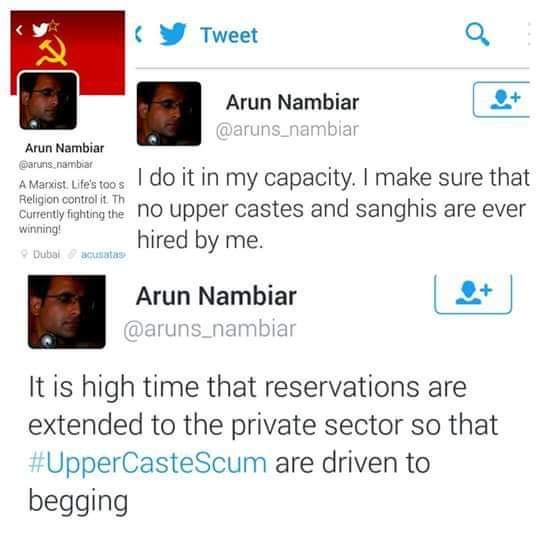 The depravity in his soul and his utter immorality can be seen in this tweet from 2016 where Arun Nambiar  was gloating over the barbaric murder of a BJP leader in Bihar’s Danapur. 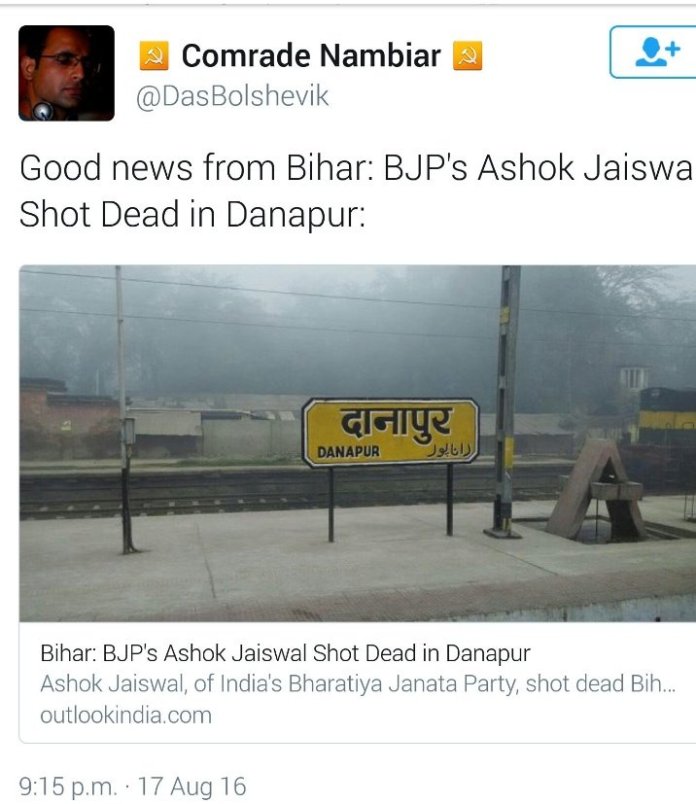 This rabid Hindu hater is anti-Bharat and secessionist to the core; he advocates for separating Southern states from Bharat to form an ‘independent DravidaNadu’ – It appears that the communist rogue is also a mastermind in planning riots and after the Islamist triggered anti-CAA Delhi riots, he gave detailed instructions to Muslim localities on how to plan better for future riots.

Communism is a failed ideology that has taken at least 100 million lives in the last century. But communists of Bharat continue to preach from their ivory towers, while sucking parasite-like on the productive output of hard-working Bharatiyas. In a spirit of tolerance, ordinary Hindus have allowed these thankless, genocidal maniacs to express their poisonous opinions for far too long – the time has come to make them pay.

In the face of flak that came flying at him this weekend, Arun Nambiar has curled up and disappeared. His Linkedin account doesn’t exist any longer, and he has since locked his twitter handle. Police investigations are supposedly on, but we must do rigorous follow-up to ensure that our secular state, conditioned to go soft on such seditious anti-socials, doesn’t shy away from its duty.

Netizens are following up with Nambiar’s employer, Digital Rhombus, to ensure that he indeed has been fired – 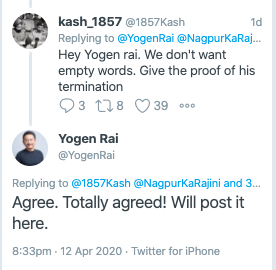 It is this kind of eternal vigilance that alone can ensure that anti-Hindu bigots stop taking things for granted. We must make these people pay using every legal mean possible.

We must also make a mention of how the ‘Kerala model’ communist ideologue, dreaming of separating South Bharat, had to crawl to Maharashtra to find employment with a private firm to feed himself.