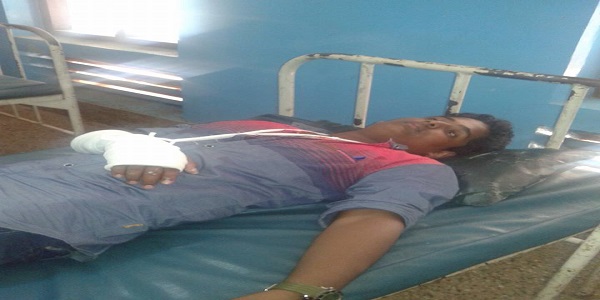 Continuing their assault on practicing Hindus in Kerala, CPM party workers have sunk to new depths and are not sparing even children now. In a recent event organized by ABVP (Akhil Bharatiya Vidyarthi Parishad) to celebrate the Hindu festival of ‘Raksha Bandhan’, CPM (Communist Party of India – Marxist) workers attacked a schoolboy and broke his hand.

Predictably, national media has suppressed this news, preoccupied as they are with ‘beef atrocities’. But attacks on children in Kerala by Communist goons are not new –  there have been three in this year alone, while murders of Hindu activists in front of school going children is another favored tactic of Marxist thugs in order to terrify the children from a young age itself. HinduPost had reported the depraved attack on the 7 year old son of a BJP  affiliated couple in May this year.

The political violence in Kerala is condemnable but d depraved attacks on children r beyond words of condemnation https://t.co/sQh0r9uPb3

Don’t expect outrage against these attacks on children – three in this year alone in Kerala – they don’t check the right demographic boxes.

With little Karthik whose arm ws broken in a brutal act of political violence in May it has healed well #REDTROCITY pic.twitter.com/pAz3z85mRA

In Kerala, 267 people Hindu activists related to either the RSS or BJP have been murdered in the last 50 years, of which 232 were killed by the CPM. After 2010, sixteen RSS workers were murdered by CPM, and the number is increasing. The number of injured – with limbs chopped off, blinded, bedridden due to injuries – is almost six times the number of those murdered.

Even West Bengal has suffered at the hands of the communists in Bharat, and the same pattern of deadly violence against their political opponents is visible there too. Hindu Dharma and its practitioners are enemy # 1 for communists who believe that their purported ideal of a class-less society can only be established once Hindu society and religion is destroyed. Never mind that Communism all over the world has resulted in brutal, dictatorial regimes like USSR, China etc where a new authoritarian ruling class has emerged – the Communist Party Politburo – that ruthlessly crushes all democratic dissent in the name of ideology. And never mind that Communists in Bharat are hand in glove with Islamists and missionaries, two other totalitarian ideologies out to destroy the multi-cultural fabric that our civilization has nurtured for millenia.