Kerala: CPI leader comes to defence of ‘poor farmers’ arrested for killing and eating a leopard 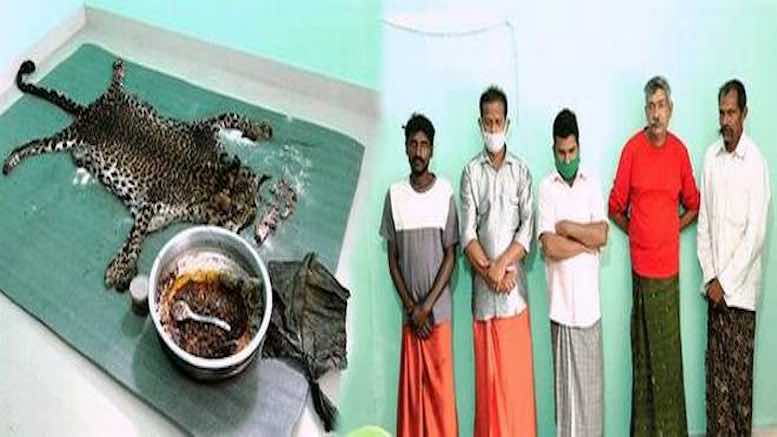 After five men were arrested for trapping, killing and eating a leopard in Mankulam, Kerala, local CPI leader Praveen Jose has come to their defence and derided media for ‘branding the poor farmers as terrorists’.

Mankulam residents Vinod P.K., 45; V.P. Kuriakose, 74; C.S. Binu, 50; Sali Kunjappan, 54; and Vincent, 50 had set a trap in a private land near the forest at Munipara, Mankulam in Idukki district. On Wednesday morning, a 6-year-old male leopard was ensnared in the trap. The men took the animal to Vinod’s house, killed it, and cooked the meat. The wild animal’s teeth and skin and around 10 kg of meat was recovered from the house.

They were arrested by authorities on Friday following a tip-off. Leopard is listed in Schedule I of the Indian Wildlife (Protection) Act, 1972. The crime can fetch seven-year imprisonment.

But while the incident has pained animal lovers across the country, CPI leader and Devikulam block panchayat health and education standing committee chairman Praveen Jose has claimed in a video posted on social media, “The farmers killed the leopard and feasted on its meat due to ignorance. But the media is branding them as terrorists without understanding the perils of farmers who live under constant threat from wild animals.”

Last year, the entire country had been shocked to see a pregnant elephant Vinayaki die painfully after consuming an explosive laden coconut. The coconut was part of a trap laid by rubber plantation owner Abdul Kareem, his son Riyasudheen, and their employee Wilson, to illegally catch wild boar in the forest and sell its meat, but was bitten by the poor elephant instead.

The year before that, 15 stray dogs were found hammered to death in Malappuram. And in 2018, a shocking incident had been reported from Palakkad district when 27-year-old tribal youth Madhu was tied, tortured and lynched to death by a largely Muslim mob. Madhu’s crime? He was accused of stealing 1 kg of rice.

Such incidents show that beneath the surface of a ‘progressive, enlightened and egalitarian’ Kerala society painted by left-liberal intellectuals, the reality is far more complex and worrying.