Cow Smugglers Open Fire On Villagers, One Dead – Hapur, UP 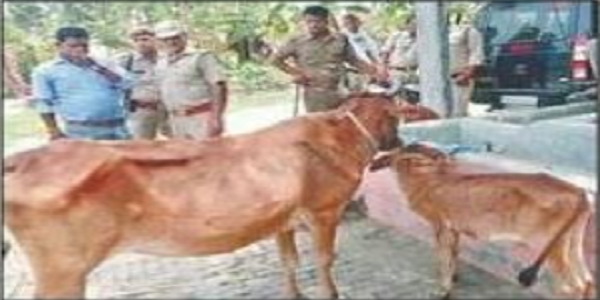 Firing by cow smugglers led an incensed crowd of villagers to thrash to death one smuggler, Kasim, in Bajhaida Khurd village, district Hapur, UP, Hindi daily Amar Ujala has reported.

Residents of Bajhaida Khurd village were informed on 18th June by some women collecting fodder about 4 men smuggling cows. When the smugglers saw the villagers coming towards them, 2 of them opened fire on the people and ran away. The other two were cornered by the villagers and severely thrashed. One of them, Kasim (45), resident of Saddikpura, later succumbed to his injuries. The other cattle smuggler Samiuddin, resident of villager Madapur, is still undergoing treatment.

The incident led to tensions between Hindus and Muslims in the neighbourhood, and stone pelting also reportedly took place. Police force has been deployed in the region to prevent further escalation of tension between the two communities.

Two cows and a calf have been rescued from the scene. A case has been registered against unknown people on the complaint of the deceased smuggler’s relatives.