Cops in Congress-ruled Rajasthan forced us into truck, says migrant labourer who survived Auraiya, UP crash 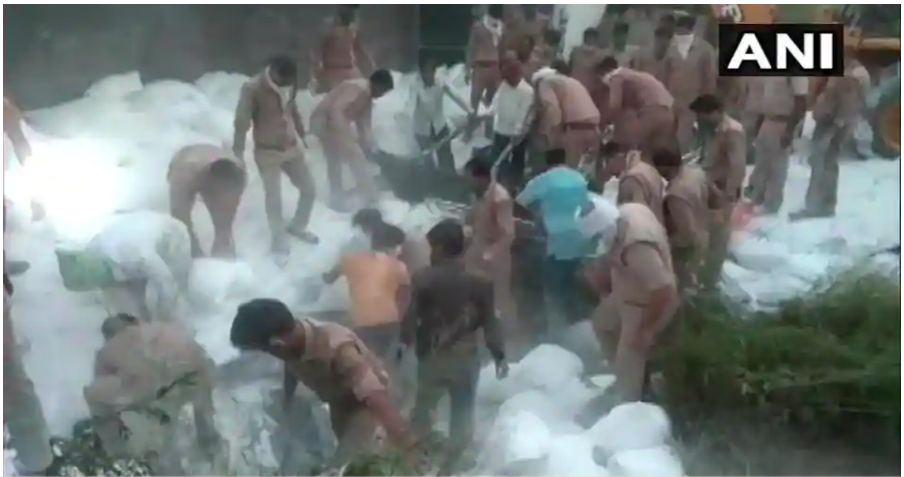 The plight of migrant labourers desperately trying to get back to their homes has shaken the entire country. A spate of accidents killing dozens of migrants and their family members have distressed one and all.

The worst accident happened in Auraiya, UP when 26 migrant workers died and 36 were injured after the trailer truck in which they were travelling from Rajasthan rammed into a stationary DCM truck carrying other labourers near an eatery along National Highway-19 in Auraiya’s Chirhauli village around 3.30 AM on Saturday. Most of the workers who died were from West Bengal, Bihar and Jharkhand.

Now, one of one of the migrant workers and a survivor of the accident, Guddu, has told UP police that Rajasthan police had forcibly put them into the lime sack-laden truck. He said he along with 43 others had left Rajasthan — where they used to work in a stone mine — for their homes in West Bengal. Their ordeal began soon after they were stuffed by Rajasthan police into the trailer-truck carrying sacks of lime and taken out of the state limits.

Incidentally, West Bengal CM Mamata Banerjee seems to have turned her back on Bengali migrant workers – she knows the pandemic situation in her state is much worse than the official numbers she shared with the centre, and thus she has allowed just 9 Shramik Trains, transporting migrants free of cost, into her state.

“We are recording statements of the migrants travelling in the truck. Law will take its course if the allegations of the survivors are found to be true,” Kanpur range IG Mohit Agarwal told Times of India.

“A day before, we had reached Bharatpur by bus. We were stopped there by Rajasthan police personnel and told that we couldn’t go ahead. After much persuasion, they allowed us to proceed without the bus. Later, the police stuffed all 43 of us in the trailer-truck carrying sacks of lime from Alwar and took it out of the Rajasthan border,” Guddu alleged.

While denying putting the labourers in the truck, a senior office of Rajasthan Police made a startling admission: “Roadways buses are plying daily and dropping migrant labourers to the borders. In this case, the bus dropped the migrants at the Bharatpur-UP border. We are following the guidelines and do not allow or ask people to get into the trucks.”

At the beginning of Lockdown 3.0, Rajasthan had 27 red or orange zone districts out of 33 total. Rajasthan has the 5th-highest number of Covid-19 cases in the country. Bharatpur was marked as a red-zone district. Inter-state movement of people via road was banned in Lockdown 3.0 which ran from May 4 to 17th. Even intra-district and inter-district plying of buses was banned in red and orange zones.

So how were Rajasthan Roadway buses plying daily, especially in red zones like Bharatpur? Why were they dropping migrant labourers at the Bharatpur-UP border, as a senior police officer has said on record to Times of India, when inter-state movement of passengers via road was totally banned?

Even in the Lockdown 4.0 notification issued last night by Ministry of Home Affairs, inter-state movement of passenger vehicles and buses is only allowed with mutual consent of States involved.

So even today, unless Rajasthan administration informs UP government as well as the administration of final destination states about movement of migrant labourers by bus, they can’t just dump them at the Bharatpur-UP border!

This brazen abdication of their duty to safeguard the lives of all Bharatiyas by the Congress government of Rajasthan reeks of the same attitude as was taken by the AAP government in Delhi which ran DTC buses to dump migrant labourers on the Delhi-UP border after just one day of Lockdown 1.0.

The centre started Shramik trains from 1 May to transport migrants safely back to their homes while ensuring all health protocols are followed upon arrival at the destination. However, Congress-ruled and other ‘secular’ states like West Bengal have shown a marked reluctance to send or receive migrants. Compared to Gujarat which had run 360 trains transporting over 5 lakh migrants (40% of the total 12 lakh passengers) as of 15 May, Rajasthan had run just 23, and Maharashtra, the state with probably the highest concentration of migrants, had run just 161 trains.

Almost all cases of migrant laborers in desperation are being seen in Congress-ruled states or Delhi – such as this example of desperate workers from Chattisgarh stuck in Latur, Maharashtra. Trucks carrying migrants back home, with stickers like “For essential services/Mahrashtra Government”, have been filmed by news channels in various parts of Maharashtra – with no police or administration personnel to check them.

Have Congress-ruled governments given up on using the Shramik Trains as it is just ‘too much work’ to identify migrants, coordinate with their home districts in other states, do medical screening, coordinate with railways and then transport the workers to stations? Or are they deliberately trying to create a public health emergency in non-Congress states in their naked pursuit of power?

After brazenly flouting lockdown norms and putting other states at risk by sending their people back stuffed in trucks without any intimation, after under-utilising the Shramik Train service, Rajasthan CM Ashok Gehlot is defending the Congress first family and lecturing the centre.