“Convert to Islam or be killed”: Tamil Hindu family lives in fear in Sri Lanka Ampara is the southern district of Eastern Province of Sri Lanka. The Indo-Sri Lanka agreement of 1987 describes Ampara and the Eastern Province as the land of historical habitation of Tamils.

The Tamil Hindu family of Jyothinathan Chandrasekhar, a poor Hindu auto-rickshaw driver, lives in Islamiapuram – a new housing colony for tsunami victims, in the village of Walathappatti in Ampara district. They have been residents in the area for thousands of years through many generations as staunch Hindus.On 31 August 2018, during the wee hours of the morning, an unidentified group of men arrived at Chandrasekhar’s house. They burnt his home to ashes. The three-wheeler (auto-rickshaw), the bread-winner vehicle of the family, was burnt down completely to its metallic frame.Fortunately, the arrival sounds of the intruders alerted the family. They woke up to escape with their three month old child, and watched their property go up in flames. They would not have survived had they remained asleep.

Background of the attack

Chandrasekhar has family connections in the village Karadiyanaaru in Batticaloa District. Along with his wife Vinojini and their three-month-old child, he moved from Karadiyanaru to Walathappatti about five years ago.Muslims colonised Walathappatti after the tsunami and renamed their section as Islamiapuram. Jyothinathan Chandrasekhar and few others were the original Tamil Hindu families who continued to live in the village, which is now dominated by recently arrived Muslims.Muslims have approached these original Tamil Hindu families and threatened them to convert to Islam. But these traditional Tamil Hindu families resisted. There were violent clashes all through between the jihadis and the Tamil Hindus. Police complaints were registered several times.“If you live in this village, you have to become Muslims or else you have to leave the area” were the repeated threats by the jihadis.

Here is a video testimony of the terrorised yet defiant Tamil Hindu family with their 3-month old baby, narrating their ordeal at the hand of Muslim radicals, and stating that they will NOT convert to Islam despite all threats –

9 relatives of Vinojini have been forcibly converted to Islam during this harrowing period. Vinojini and her kith and kin are from Nellikkadu in Batticaloa district.

Complaints have been made to Sammanthurai police several times. But there was inaction by the police.

When Chandrasekhar and Vinojini went to the police to complain about the burning of their house and the three-wheeler, the police ignored them. The police reluctantly recorded it as a civil dispute even though it was a blatant criminal act. 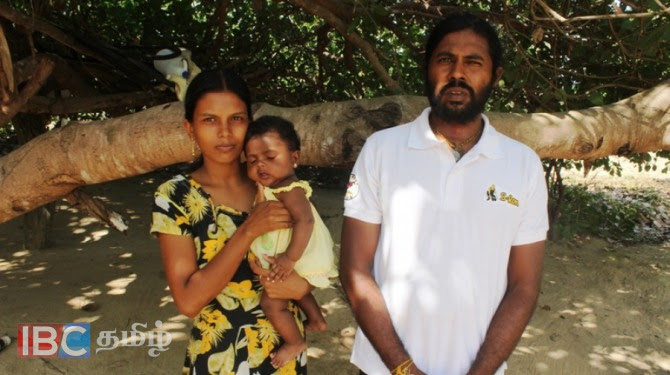 Chandrasekhar and Vinojini stated that Jihadi groups in Islamiapuram are hell bent on converting them to Islam. Their resistance was met with threats. Subsequently these jihadi groups burnt their property.

Chandrasekhar has now moved to stay with his relatives in Karadiyanaaru in Batticaloa district. They carried with them their sacred Hindu murtis and pictures of Hindu Gods, praying all the way for protection.They fear that the Jihadi hands could extend to their temporary dwelling in Karadiyanru. Having been terrorized once, they are now living in a state of fear.

The poor Saiva Tamil Hindu villagers in the entire Eastern Province continue to be targeted for conversions by radical Tamil-speaking Muslims, who have been heavily funded and armed by Pakistan and Wahhabi Arab countries.200 Saiva Hindu war widows have been forcibly converted to Islam by their Muslim employer, and have been married off to Muslim men in neighbouring Batticaloa district of Eastern Province.

(Translation of IBC Tamil article done by Ravi and news shared by Kumarathasan Rasingam, a Hindu activist in Canada)