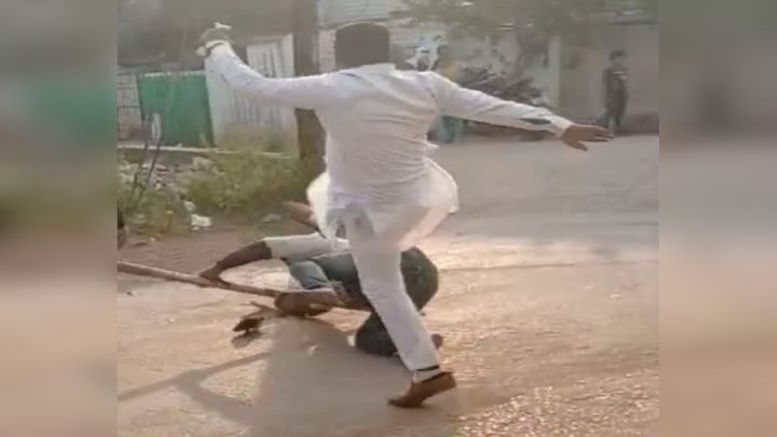 Rajatlab’s Congress councilor Kamran Ansari’s video of beating of a tribal youth in public went viral on Monday. In the video, the councilor is seen beating the young man with sticks and kicking him. FIR has been filed against Ansari and his brother in connection with this incident that took place on Sunday evening reports Dainik Bhaskar.

The video of Ansari thrashing the tribal youth was posted on social media by people who witnessed the act. The young man’s mother has complained about this. Ansari has filed a counter police report, accusing two others, including the tribal youth, of drunken misbehavior.

Meanwhile, the BJP has issued a statement regarding this issue with former BJP MLA Srichand Sundrani reaching the police station with the victim’s family to file a report against Ansari. Late at night the Civil Line Police registered a case of assault against Ansari and his brother among others. There has been no comment as yet from Chattisgarh’s Congress CM Bhupesh Baghel, or from Rahul Gandhi who had promised to be a ‘soldier in Delhi’ for tribals.

The victim’s mother also alleged that after the incident, Ansari and his colleagues came to her house and threatened her. According to the Civil Lines Police, Ansari has filed a report that Jai Mandavi, Sohan Nayak, and Inder Nayak, who live in his ward, came to his office in an inebriated state on Sunday and started misbehaving.

He also said that his office was ransacked and the three even misbehaved with the people and women present there. According to police, Jai and his companions have been missing since the incident. They have not even reached home.

Jai’s mother told that she has been running from pillar to post for several days to get their ration card made but Ansari was not getting it made. On Sunday, Jai went to Ansari with regard to the ration card issue. It was then that Jai’s mother was informed by the people that he was being beaten up. She rushed to the spot to find Jai being hit by an iron pipe and rod. She said that after the incident, Ansari came to her house and threatened them as a result of which her son got scared and has disappeared ever since.

The 30-second viral video shows Ansari and his accomplices chasing Jai. Ansari is seen hitting Jai with sticks and pipes while the latter is lying on the road. Ansari is even seen kicking and punching the youth while Jai’s mother and friends try to save him. The clip even shows Ansari pushing away the youth’s mother and friends who are attempting to rescue the latter.