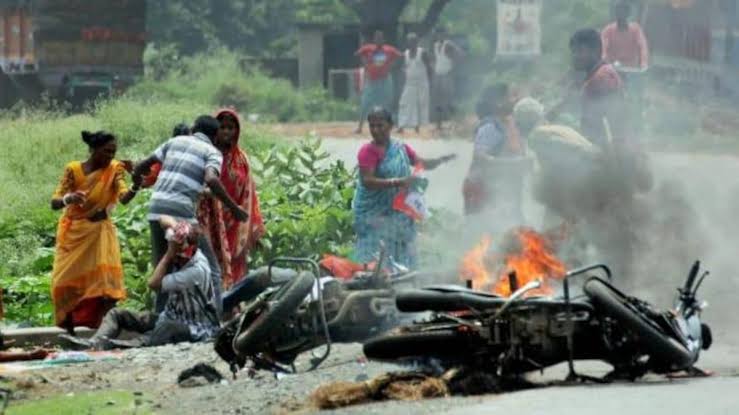 The post election violence in West Bengal has had a devastating impact on Hindus, especially those from the economically weaker sections of the society. Many Hindus have been brutally murdered or raped, while thousands have been forced to abandon their homes to seek safety and are now living in shelters. 80,000 people have fled from their houses as per BJP president J.P. Nadda, some of them seeking refuge in the neighbouring state of Assam. The situation is so bad that the governor of WB, Jagdeep Dhankar who went to check the aftermath cried on camera.

On May 5th, The National Human Rights Commission of India took note of the ongoing violence and ordered an investigation into the human rights violations and incidents. On May 7th, India’s National Commission of Women declared that many women are receiving rape threats and want their daughters to leave the state as police are not taking effective steps for their protection.

On May 18th, the Supreme Court of India also issued a notice to the state government regarding the violence and murders of workers from the opposition parties. According to the petitioner’s filing to the Supreme Court: “There is a complete breakdown of law and order and inherent apathy of the institutions who, though sworn to act independently, have become partisan and are themselves hand in glove in loss of human life and non-responsive to the cries of the common man.”

Yet, the global media and human rights activists continue to remain relatively mute on this dire situation. But fellow sanatanis should take responsibility to not only amplify their cries for justice but help them sustain and lead a dignified life. CoHNA (Coalition of Hindus in North America) is an advocacy group representing the Hindu community of North America. The coalition seeks to protect the collective interests of the Hindu community by working on the issues faced by them and educating the public about Hindu heritage and tradition. CoHNA has launched a fundraising drive to support Hindu victims of WB post poll violence. Join CoHNA to stand in solidarity with West Bengal Hindus and help raise money for their basic needs such as food, medicine, supplies and rehabilitation.