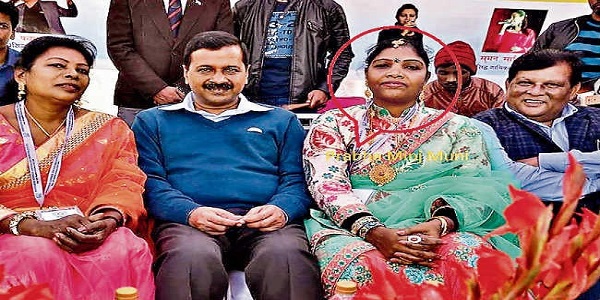 Delhi Police has arrested a Christian woman named Prabha Minj Muni (42) and her husband Rohit Muni on charges of trafficking & sexually abusing minor girls from Jharkhand, in the guise of placing them as domestic helps in Delhi-NCR, Hindi daily Dainik Jagran has reported.

In 2013, a case was registered against her in Jharkhand’s Simdega district and a prize of Rs 25,000 was announced for her arrest by the Jharkhand government. She used to lure girls through Facebook, fooling them in the name of getting them good jobs and education and then trapping them in the chain of human trafficking.

She presented herself as a social worker who works for upliftment of poor girls by providing them jobs in Delhi. She along with her husband Rohit used to target such girls from economically weaker sections from backward areas of Jharkhand. They used to make false promises and paint a rosy picture of a good life to trap the girls.

Later she would sell many of these girls in Delhi and other areas. Whatever amount the girls used to earn, this couple used to grab the same. If someone tried to escape, they used to threaten her. The couple made lots of money and used to run this racket from Delhi’s Punjabi Bagh area.

Apparently, Prabha Minj is also the vice-President of All India Christian Minority Front, .

Rape, beatings and attacks with knives

16 minor girls narrated their harrowing ordeal after being rescued and returning to Ranchi, Jharkhand. They said that Rohit Muni used to rape them everyday, and would thrash any girl who resisted. One girl from Godda district recounted how Prabha Muni and her entire family would torture her to work, and if she opposed she would be stripped naked and thrashed. She was even attacked with a knife.

Prabha Minj used to share many pictures on her Facebook account where she was seen with ministers, politicians and police officers. Infact, in one such picture, she is sharing the frame with Delhi’s Chief Minister Arvind Kejriwal, as reported in Prabhat Khabar.

As per the information received from Delhi police under an RTI, from 2012-2017, 41394 children have been reported missing from Delhi. This means that on an average, around 18 children are reported missing daily in Delhi alone. One can imagine the scale of the problem across the nation.

In 2017 itself 6454 children went missing out of which 3915 are girls and 2535 boys. Only 70% of such children have been traced by the police. Age of 3536 missing girls was between 12 – 18 years. Most of the missing reports have been lodged from areas in North-East and North-West Delhi. A large number of human trafficking gangs are said to be active in Delhi. They force the children to beg on bus stands, railways stations, busy roads and other such areas. Girls are sold to those into prostitution business. Some girls are even trafficked to Middle-east countries.

While there is rising awareness in society & Government about this criminal nexus of human traffickers, one aspect which is ignored is the role of certain Christian institutions (children’s shelters, orphanages etc) in this affair. Recently, nuns from Mother Teresa’s Missionaries of Charity were arrested for illegally selling infants born to unwed mothers. Last year, the founder of Mose Ministries was arrested for trafficking girl children.

Researchers have also shown how a missionary-NGO nexus works in places like Jharkhand to place tribal girls as domestic helps in metro cities. Often times, the girls brought over by such ‘placement agencies’ are left to the mercy of criminals like Prabha Minj Muni and her husband.