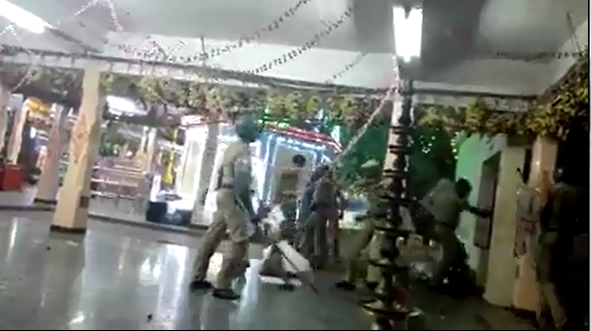 A shocking incident of desecration of a Hindu temple and brutal assault on Hindu devotees by Christian police officers has occured in Kanyakumari district, Tamil Nadu. As per a report in hindusentinel.com –

“The Christian-majority Kanyakumari district saw a horrendous case of temple desecration by its majoritarian Christian police. The Koottalumoodu Bhagavathi Amman temple In Kanyakumari district of Tamilnadu (where christians are majority), conduct summer time festival every year. During the festival they burst firecrackers as part of festival at mid night. However, this time due to elections police did not gave permission for fireworks,
but they accepted to allow half-an-hour exception before 10.00pm. Hindu devotees accepted that arrangement. As per the rule of law they conducted fireworks.

Some Hindu teens fired crackers who were not aware about the permission schedule. By using this as an alibi christian police officers entered the temple with boots and beat up the devotees including children and women (as seen in the attached video a man screaming “do not beat ladies”). The christian police officers smashed up the murtis and pooja ornaments, engaging in desecration of the devasthanam.

So far, no media or civil liberties groups have taken note of the incident, let alone condemn the desecration.

This is a brief video of the incident –

This begs the question – would the police have conducted themselves with such horrendous disrespect inside a mosque or a church? In the video, a man can be heard pleading with the police …. to spare the women.

A few stray incidents of fire and theft in Delhi churches just before the Delhi assembly elections were enough to trigger a month long campaign of ‘Christians under attack’ in our media and civil society. We even saw op-eds & comments from prominent Christian figures of the country like Julio Riberio and Admiral Sushil Kumar Isaac that they felt ‘unsafe’ due to the current environment in the nation. But will we see anyone scream ‘Hindus under attack’ for this inexcusable crime against Hindus by the State in a  Christian majority region? Or will this also get brushed under the carpet because as per secular-liberal logic Hindus are the numerical ‘majority’ in Bharat, hence they can never be victims?