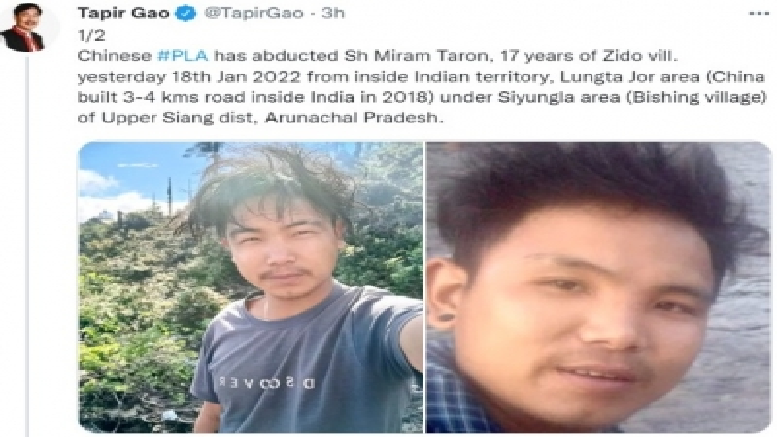 The Chinese Army has reportedly abducted an Arunachal Pradesh teenager from the Indian territory where China had constructed 3-4 km road in 2018.

His friend, who managed to escape, reported the matter to the authorities and brought it to the attention of Tapir Gao, an MP from Arunachal Pradesh.

The incident has been reported from Upper Siang district.

Tapir Gao tweeted: “Chinese #PLA has abducted Sh Miram Taron, 17 years of Zido village on Tuesday from inside Indian territory, Lungta Jor area (China built 3-4 kms road inside India in 2018) under Siyungla area (Bishing village) of Upper Siang district, Arunachal Pradesh. His friend escaped from the PLA and reported to the authorities. All the agencies of the Central government are requested to step up for his early release.”

Recently, China’s Ministry of Civil Affairs had altered names of 15 places in Arunachal pradesh, which was rejected by the Indian Ministry of External Affairs which said that such a move by Beijing cannot alter the fact that Arunachal Pradesh is an integral part of Bharat.