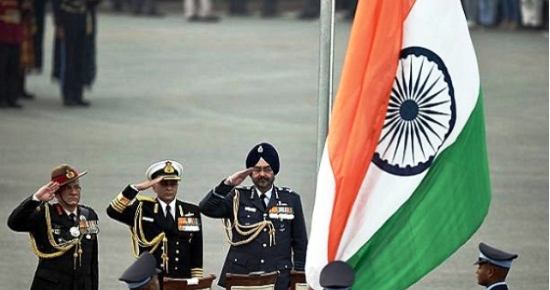 Prime Minister Narendra Modi in his Independence day address announced the creation of the post of the Chief of Defence Staff (CDS), who will be the government’s single-point military advisor. He will be senior to the three service chiefs.

Reacting to the Prime Minister’s announcement, Gen VP Malik, who was the Army Chief during the Kargil War said, “Thank you PM for announcing the historic step of institution of CDS. This step will make our national security more effective and more economical. It will ensure better jointmanship and multi-disciplinary coordination”.

Demand for CDS made by multiple experts committees

This is Bharat’s most significant defence reform in the last 72 years. The post of the CDS was first recommended by a Group of Ministers (GoM) set up to examine the findings of the Kargil Review Committee (KRC) in 2000. In May 2001, the GoM headed by former Minister of State for Defence, Arun Singh, recommended the appointment of CDS.

In 2012, the Naresh Chandra Committee recommended that post of a permanent chairman of the Chiefs of Staff Committee (CoSC) should be created. The CoSC comprises chiefs of the Indian Army, Indian Navy and the Indian Air Force. The senior-most among them acts as the Chairman. In 2016, CDS was also recommended by the Gen. Shekatkar Committee. Thus the demand for having a CDS has been raised on multiple occasions by experts.

Why CDS was not created?

In the past twenty years since it was first recommended, questions regarding the creation of CDS have been raised in Parliament from time to time. One of the major reasons why a decision on creating the post of CDS could not be taken was because political consensus could not be created. There was internal resistance because of the perceived fear of the marginalisation of service headquarters and the dilution of the defence bureaucracy’s grip on military decision-making.

Today we have seventeen single-service Command HQs in existence with their own doctrinal focus and preparation for three different kinds of warfare, in an era which requires integrated military operations.

The institution of a CDS is best justified by the importance of strategising for a robust and cost-efficient national defence policy. The CDS would foster inter-services jointness in terms of budgeting, equipment purchases, training, joint doctrines and planning of military operations – in today’s and future environment.

Bharat’s land borders remain in a continuous state of volatility due to infiltration, incursions and the threat of territorial encroachment. Under these conditions, the Army has to be in a perpetual state of readiness. When it has come to fighting wars or terrorism, the Army has carried the primary responsibility. In terms of future wars too, it would be the tool as well as the target of conventional and tactical nuclear strikes.

The CDS could control the Strategic Force, Andaman and Nicobar Command, the futuristic Special Forces, Cyber and Space Commands/Divisions, the National Defence University and Coast Guard.

It is expected that the CDS will synergise long-term planning, procurements, training and logistics of the three Services. This is expected to save money by avoiding duplication between the Services, at a time of shrinking capital expenditure within the defence budget.

The CDS will synergise the integrated functions of the three services to propagate one strategy and back it up with tri-services capability building. The CDS can also take decisions on prioritising modernisation of the three forces and procurement.

Presently, there are three different agencies buying the same thing, thus wasting resources. The accounting systems can also be standardized. Military diplomacy for Bharat’s strategic engagements will also be synergised.

We should not be preparing to fight future wars with yesterday’s force and command structure and training. Bharat needs a CDS but his role, responsibilities and accountability have to be defined as per Bharatiya requirements. Keeping in mind future warfare, enhancement of combat capabilities of hybrid wars, with the adversary using terror as a weapon is a bigger threat, more than a conventional war in the near future.

Thus, in the first phase, the role and responsibilities of the CDS should cover joint management and planning and subsequently, over the next seven to 10 years, we could change to joint theatre commands.

Raksha Mantri Rajnath Singh tweeted that “CDS will have a long-lasting and a positive impact on India’s security.” The creation of the post of CDS is one of the biggest military reforms that will definitely improve Bharat’s national security.

(This article first appeared on 18 Aug, 2019 in finsindia.org and is being reproduced with the author’s consent. Forum for Integrated National Security (FINS) is an apolitical think tank focused on integrated national security studies.)