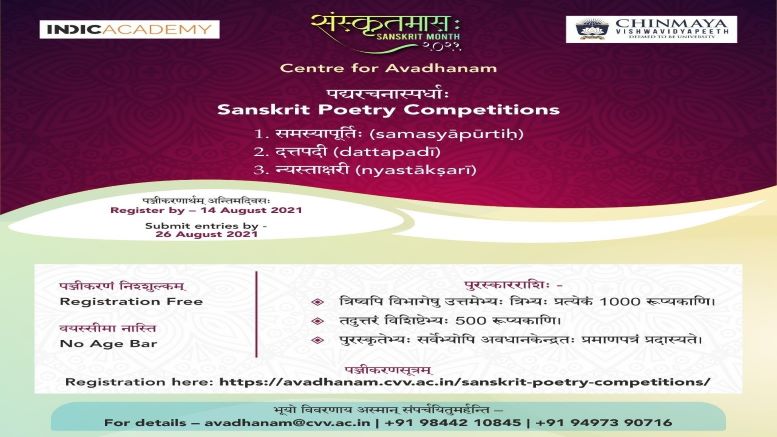 To celebrate Sanskrit month, the Centre for Avadhanam which is a joint initiative of the Indic Academy and Chinmaya Vishwavidyapeeth have come together and announced a Sanskrit poetry competition. The competition has three topics samasyāpūrtiḥ, dattapadī, and nyastākṣarī.

Samasyāpūrti, dattapadī, and nyastākṣarī are some principal components of sāhityāvadhānam, that have been traditionally associated with constrained poetry that evokes wonder. While in avadhānam these are composed extempore, there is also the convention of attempting these individually, at leisure, as described in the treatises on the Art of Poesy.

In samasyāpūrti or samasyāpūraṇa, a line which is inconsistent with reality and is incomplete is given. It has to be incorporated in a verse whose meaning will provide a solution to the problem line and complete the context. This challenge tests the lateral thinking and unbounded imagination of the person.

In dattapadī, the topic and meter in which a verse has to be composed are provided, in addition to four words that usually belong to a language other than the one in which the verification is attempted. The suggested words should not be compounds and are mostly funny as they seem out of place. The challenge here is to employ these words in a contextually appropriate manner, their placement with respect to other words in each line, appearing natural and not forced. This demands a great level of erudition and creativity.

Nyastākṣarī requires the poet to compose a verse on a given topic and specified metre, where certain letters are to be used in predetermined points in each line. Thus, it is obvious that erudition, creativity, and other skills are required in great measure, just to attempt such poetic feats.

As part of the Sanskrit month celebrations, the Centre for Avadhānam proposes to conduct competitions in these three categories of versification, in an effort to identify and encourage talented poets in the Sanskrit language as art flourishes only through artists.

Although the competition is open for people of all ages registration is compulsory. The last date for registering for the same is 14 August 2021. Participants would receive the challenges in each category by email.

Sanskrit enthusiasts may register for the competition through the link given on their website.

Hindi language needs to move back to its Sanskrit roots

Loss of Purva Paksha tradition and its consequences