A woman who says she was kidnapped and abused as a sex slave for 13 years by a British Pakistani taxi driver in the Midlands (a region of UK), who also pimped her out and ‘sold’ her four children, has spoken out for the first time.

Anna Ruston, who changed her name after the ordeal, says she was a vulnerable 15-year-old in 1987 when a taxi driver called Malik took an interest in her and invited her to his home to meet his mother, brothers, and their wives.

Writing in her new book ‘Secret Slave’ Ruston said Malik called her a “white s**t” and raped her, before locking her in a bedroom and relentlessly beating her for 13 years.

She says she was prostituted to other men and her captor “sold” the four children she bore to him in captivity. She says Malik would stop beating her during pregnancy, but gave away her children to other couples for money.

The smell of garlic still brings back horrific memories as her captor used to reek of it when he abused her, Ruston told the Daily Mirror.

“I can still see that bedroom, the corner where I would rock in pain. Although after a while I stopped feeling pain, I think my body shut down.

“And I can smell it – the can I used as a toilet, the garlic he reeked of. I got to the point where I didn’t know what life was.”

Ruston says she tried to kill herself with painkillers, by throwing herself down the stairs, or trying to strangle herself with a scarf. She says she was taken to the hospital with injuries on a number of occasions, but was never left alone with doctors or nurses

Ruston told BBC Radio 4’s Today program: “There were always three or four people with me, so I couldn’t see an escape. I never answered the doctors I just nodded or shook my head.”

She said she believes people were afraid to help her for fear of being accused of discrimination.

“Malik dressed me in his culture’s clothes, dyed my hair black, made me wear a scarf and keep my head down. When he spoke for me they thought it was a cultural thing. And I think people are scared to be accused of discrimination.”

She says she eventually escaped with the help of a health visitor after Malik told her she would be taken to Pakistan where she feared she would be “stoned to death or sold.”

She wrote a note begging for help on a piece of paper along with a time she knew Malik and his family would be distracted for prayers for the Muslim festival of Eid. The health visitor handed back a note saying she would ring the house phone three times when she was outside, allowing Ruston to run for help through the front door where a key had been left.

Ruston, who is now 44, has been free for 16 years. She says she is too scared to give evidence to police but was encouraged to write about her experiences as part of her therapy.

She claims her ordeal could happen on “any street in the UK.” Ruston had originally lived with her great grandmother, but after the elderly woman died, she moved in with her abusive step father, from whose care she was later removed.

Her fractured relationship with her own family meant she was not reported missing, she says.

The above report appeared on RT.com. In 2014, an independent report estimated that 1,400 children had been sexually abused in the town of Rotherham, South Yorkshire, England between 1997 and 2013, predominantly by gangs of British-Pakistani men. Authorities in Rotherham failed to act effectively against the abuse or even, in some cases, to acknowledge that it was taking place for fear of “giving oxygen” to racism.

From sexual grooming of young Christian, Sikh and Hindu girls in UK, to Love Jihad in Bharat – the pattern is the same. Kafir (non-Muslim) females are considered fair game and easy meat for exploitation by Muslim fanatics. And the response of civil society & elites to this insidious crime is startlingly similar in societies as far apart as UK and Bharat – a complete denial of the systematic assault due to political correctness (also called secularism in Bharat). Those who raise the issue are maligned as bigots – racists in UK and communal in Bharat.

This poster reflects the mindset toward ‘uncovered’ women, even in Muslims who have migrated to Western democracies – 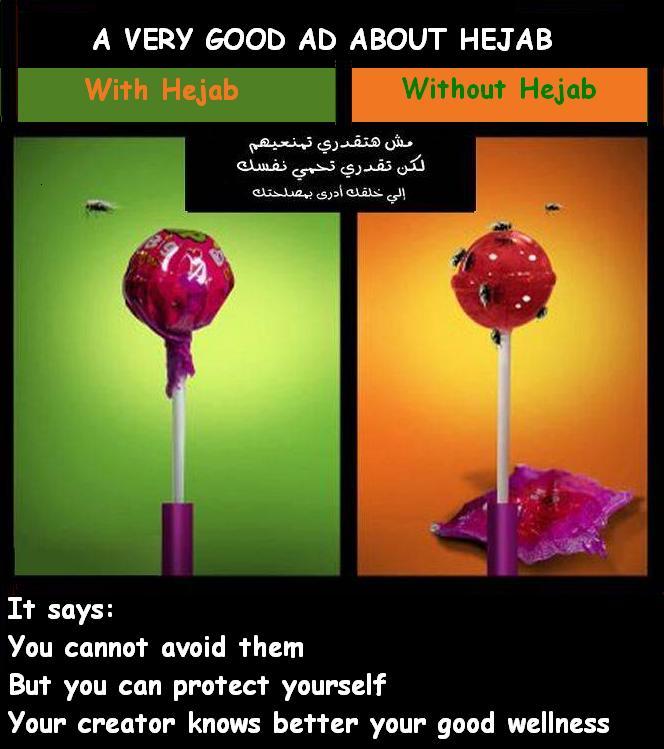 This is what their scripture tells Muslims –

Quran (33:59) – “Tell thy wives and thy daughters and the women of the believers to draw their cloaks close round them…”

Is it any surprise that many Muslims regard non-Muslim women dressed in any dress other than Muslim dress like hijab or burqa as ‘provocative’ and women who are morally lax? In fact, the very word kafir represents a morally lax person as its usage in Bollywood songs shows.

The seizure of kafir girls and their use as sex slaves is also sanctioned in the Quran. According to Islamic law, Muslim men can take “captives of the right hand” (Quran 4:3, 4:24, 33:50). The Quran says: “O Prophet! Lo! We have made lawful unto thee thy wives unto whom thou hast paid their dowries, and those whom thy right hand possesseth of those whom Allah hath given thee as spoils of war” (33:50). 4:3 and 4:24 extend this privilege to Muslim men in general.

As late Dr. K.S. Lal, one of the few historians who has written about the atrocities committed by Muslim rulers on the Hindu population, writes –

“The three waves of invasions under Muhammad bin Qasim, Mahmud of Ghazni and Muhammad of Ghaur, took about five hundred years to establish Muslim rule in Bharat. For another five hundred years, sultans and emperors ruled over the country….these invaders left almost a permanent lagacy of political and social turmoil in Bharat because their aims and methods were continued by Muslims even after they had become rulers.

When Muhmmad bin Qasim invaded Sind, he took captives wherever he went and sent many prisoners especially women prisoners to his homeland. Parimal Devi, and Suraj Devi the two daughters of Raja Dahir who were sent to Hajjaj to adorn the harem of the Caliph were part of a large bunch of maidens remitted as one-fifth share of the state (Khums) from the booty of war (Ghanaim).

From the days of Muhammad bin Qasim in the eighth century to those of Ahmad Shah Abdali in the eighteenth, enslavement, distribution and sale of captives was systematically practised by Muslim invaders.

One recognised way of escape from sex exploitation in the medieval period was Jauhar or group-self-immolation. Jauhar also was naturally resorted to because the motives and actions of the victors were never in doubt…the repeated Jauhars at one place, Chittor, during the attacks of Alauddin Khalji, Bahadur Shah of Gujrat and Emperor Akbar have become memorable for the spirit shown by the Rajputnis. Captured and erslaved women often had to lead a life of misery and dishonour as happened with Deval Devi, daughter of Raja Karan Baghela of Gujarat”

Enslavement of Hindu women and men is the one constant in the long list of invaders and Muslim rulers of Bharat – Mahmud Ghaznavi, Muhammad Ghauri, Qutabuddin Aibak, Sultan Iltutmish, the Khaljis and the Tughlaqs (1290-1414 C.E.) like Alauddin Khalji and Muhammad bin Tughlaq, Taimur the Lame, the Mughals, Nadir Shah etc.

The sex slave trade of captured girls from Eastern Europe, Balkans, and Asia Minor/Byzantium by Turkish Muslim invaders, mirrors the Hindu experience around the same time –

And it is not just the scripture or historical examples that justify sex slaves – even present day authority figures have justified sex slavery of kafir women. Shockingly, the defenders of this barbaric practise include Muslim women like Kuwaiti politician, Salwa al-Mutairi and Suad Saleh, a lady professor from the renowned Al-Azhar University in Cairo, Egypt.

There are signs that UK is waking up to the problem it faces due to the insular, regressive and supremacist elements in its Muslim population – but left-liberal elites in Bharat and our political class are still wide asleep on this issue, just as they are on the jihadi threat to West Bengal.