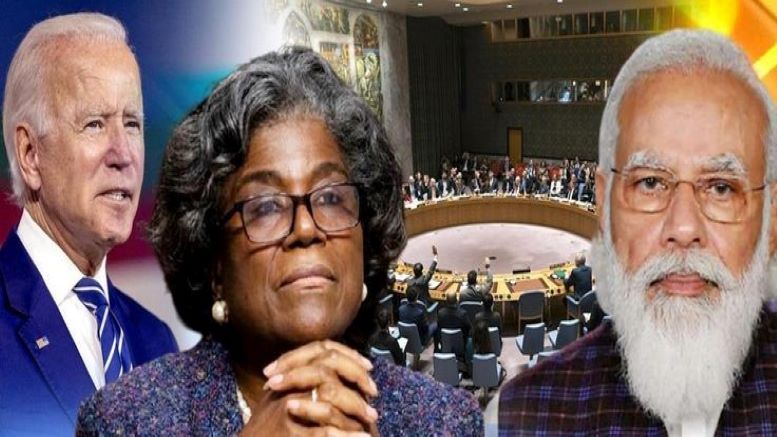 The Biden administration has bared its fangs against Bharat barely a week after coming to power. Newsreports indicate that Biden’s envoy has undermined Bharat’s bid for a permanent seat in the UNSC (United Nations Security Council).

This U-turn comes after the Biden team had during the campaign promised they would push for Bharat’s membership as a permanent UNSC member. For the Bharatiya-Americans who voted for Biden and Democrats, the statement of the US envoy should come as a cold reminder that for the left-liberal global Western elites that Biden represents, Bharat is a nation to be kept in check and constantly disparaged for its Hindu ethos.

Linda Thomas-Greenfield who has been picked by Biden to be the next US ambassador to the United Nations (UN) has opined that Bharat’s permanent seat UNSC membership is a matter of discussion and refused to commit the support of the Biden administration in this regard. It must be mentioned here that the administrations of three previous US presidents Donald Trump, Barack Obama and George Bush had supported Bharat’s claim for a permanent UNSC membership.

Linda replied “there are others who disagree within their regions that they should be representative of their region” to a question raised regarding Bharat and other countries such as Germany and Japan among others securing a permanent UNSC seat. This was an apparent reference to Coffee club countries including Pakistan who have been objecting the permanent entry of Bharat and others to the UNSC.

Thomas-Greenfield was repling to a question raised by Senator Merkley who had held that the security council was not representative of the geopolitical landscape as key powers such as Bharat, Germany and Japan have not been included as permanent members. He also raised the question as to whether there need to be reforms in the security council.

This change is stance is indicative of things to come as Biden administration has already decided to revive military to military ties with Pakistan. That the Biden administration is probably not serious about keeping its electoral promise of backing Bharat’s claim to become a permanent UNSC member is clear from Biden having picked Linda Thomas-Greenfield who has been more pro-Pakistan and pro-China than pro-Bharat.

This has been corroborated by experts who believe that Linda Thomas-Greenfield is not the ideal choice considering that she had delivered a talk at the now closed down Confucius Institute, that had been funded by China, at one of the American Universities where she favored China’s predatory lending  and deals in Africa. Although she tried to offer a poor explanation for the same, the fact remains that her attitude favors China more than Bharat.

Since she has a soft corner for the Chinese Communist Party (CCP), it is hardly surprising that she would favor Pakistan’s viewpoint over that of Bharat. This is what Washington Post has to say about Thomas-Greenfield and her likely deputy Jeffrey Prescott’s relationship with China:

Overall, Thomas-Greenfield has extensive diplomatic experience and is expected to be confirmed. Her proposed deputy, Jeffrey Prescott, is a well-respected China hand. Their job, if confirmed, will not be to manage “win-win-win” arrangements with Beijing, but to work with allies to defend and advance Western values and norms against China’s attempts to erode them.

This also explains her dilly-dallying on Bharat’s UNSC membership considering that she is favorably disposed to the Chinese who in turn are opposed to Bharat being given a permanent UNSC seat. Although it remains to be seen how this appointment plays out in the days to come, given her past history it is not surprising that Linda Thomas-Greenfield has been quick to take a U-turn in this matter indicating a change in the Joe Biden changed stand in the issue.