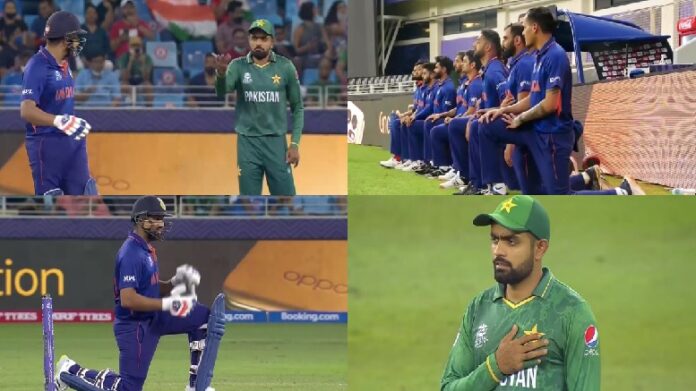 In the competitive world of international sport, complete and utter focus on the job at hand is a necessary ingredient for success. Allow yourself to be distracted with externalities or lack the ruthlessness to study and exploit weaknesses in your Opposition, and you will pay the price more often than not.

Ahead of the start of the high-octane clash against Pakistan in the Super 12s stage of the ICC Men’s T20 World Cup, the Virat Kohli-led Indian side took a knee to ‘showcase solidarity’ with the Black Lives Matter (BLM) movement against systemic racism in USA and other White-dominated countries. On the other hand, Pakistan just stood with their hands on their hearts, showing more autonomy over their actions.

Bharat ended up losing its first ever match to Pakistan in a World Cup event and suffered its worst defeat ever in T20 to boot. In a one-sided affair, Pakistan won yesterday’s match by 10 wickets. Kohli was seen repeating the post-match bonhomie with Pakistani cricketers that he had exhibited after a similar thrashing by Pakistan in the final of the 2017 Champions Trophy.

Such bonhomie with players representing an Islamofascist nation that not just spreads terror, but also subjects its minorities to institutionalized persecution such as abduction, rape and forced conversion of minor girls, would nauseate most right-thinking people. But left-liberal commentators who surround Bharatiya cricket like Harsha Bhogle do not care for such ground realities in their desire to be seen as ‘good humans’.

At the post-match conference, Kohli said the team took the knee as it was ‘communicated to us by the management’ and as the Pakistan team agreed to pay their tribute to the same cause.

Racism against non-Whites is an ugly reality in cricket, and Bharat has been at the forefront of combatting it as our leadership of the cricketing boycott of apartheid-era South Africa shows. But ‘taking the knee’ is a political act which has no real context for Bharat. The reality is that people of Bharatiya-origin suffer discrimination in the Black majority Caribbean nations (West Indies). Anyone who has followed Michael Holding’s commentary and Steve Bucknor’s umpiring would know the sort of anti-Bharat animus that some Black Caribbeans carry.

Here are some reactions from netizens:

Incidentally, 5 White South African players refused to take the knee before their T20 World Cup match with Australia. This is a country where racism by Whites, who earlier ruled over the majority Blacks through the brutal Apartheid system, is still a fact of life. Cricket South Africa’s hearings into racial discrimination came up with shocking revelations such as spinner Paul Adams being called ‘brown shit’ by White team mates including current coach Mark Boucher.

There were also questions asked of Kohli’s eager anti-pollution activism that kicks into life every year before Diwali. Recently, the cricketer was heavily criticized after announcing on his Twitter and Instagram profiles that he would be sharing ‘tips’ on celebrating a ‘meaningful Diwali’ on his new Pinterest profile, as part of a paid campaign for Pinterest. After the criticism, the Pinterest profile link was quietly deleted by him (or his PR handlers).

Others pointed out how this ‘taking the knee’ act was just imitation of Western wokeism, and betrays a colonized mentality while being ignorant of burning issues facing Bharat and its neighborhood. Hindus suffer an identity crisis and such acts by our confused, self-alienated cricketers are representative of a wider malaise in Hindu society.

For all its much-hyped clout, BCCI still hasn’t come out clearly on the reasons why Bharat doesn’t play bilateral cricket with Pakistan: because Pakistan is a state-sponsor of terror directed against Bharat, Afghanistan and many other parts of the world, and because it denies basic human rights to its minority population. We always hear BCCI officials pass the buck to the Government, giving the impression that if left to them they would schedule matches with Pakistan at the earliest.