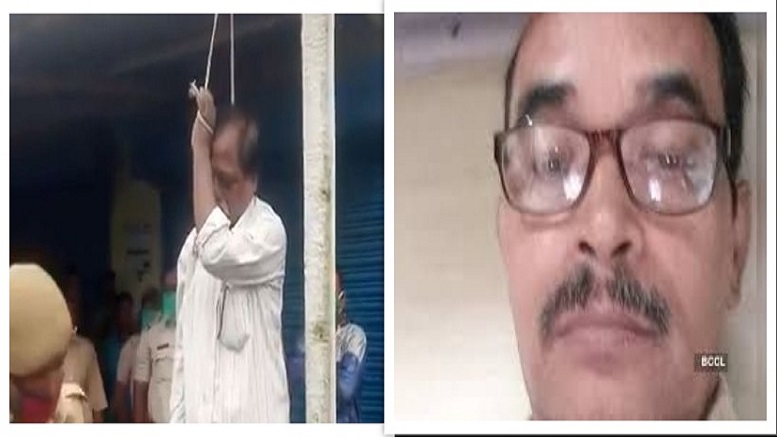 In a shocking incident, the BJP MLA from Hemtabad in Uttar Dinajpur of West Bengal, Sh. Debendra Nath Roy was found hanging near his village home in Bindal.

The Bengal BJP took to twitter to announce the news. The party also alleged that “people are of clear opinion that he was first killed and then hung”.

Body of Shri Debendra Nath Ray, BJP MLA from Hemtabad, a reserved seat, in Uttar Dinajpur, was found hanging like this in Bindal, near his village home. People are of the clear opinion that he was first killed & then hung.

As per news reports, family members of the MLA claimed that he was killed and hanged later. People of the area also claimed that the BJP MLA was murdered and then hanged. Police said the cause of death will be ascertained after post mortem.

Mr. Roy was earlier with CPM and had joined the party in 2019 in Delhi in presence of Kailash Vijayvargiy and Mukul Roy. Bengal, along with Kerala, has been infamous for the political violence unleashed by Communists and then TMC in last few decades.

The gruesome politics of violence in Bengal started with the Sainbari Massacre. CPM goons murdered Sain brothers, Malay Sain and Pranab Sain in a gruesome manner. An infant was thrown into the fire in front of his mother. In an incident that reminds one of demons, the mother of the Sain brothers, Mriganayani was forced to eat rice smeared with blood of her sons!

The main accused was Nirupan Sen, who went on to become MLA and minister in the Communist govt. The party also rewarded him with a seat in the politburo, its highest decision-making body.

Since then, it has been a constant stream of massacres, murders, and lynchings that defined the politics of West Bengal. Be it the Marichijhapi massacre of 100s of Dalit Hindu refugees from East Bengal in 1979 or burning alive of 17 Anand Margi monks on Bijon Setu in the middle of Kolkata, or Nandigram massacre in 2007, communists proved to be true successors of Mao Zedong.

Things did not change under the rule of Trinamool Congress. In 2012, former CPM MLA Pradip Tah was lynched by Trinmool leaders and workers. The elections to Panchayat have always been marred by violence, fraud and booth capturing. In 2013 elections, 39 people were killed and in 2018, 10 people killed.

Attacks on BJP leaders and workers

According to a Sunday Guardian report, over a one-year period from Oct 2018 to Oct 2019, 2 BJP leaders/workers were killed each month in Bengal. The far-left extremists have often attacked BJP MPs in Kolkata, specially in universities. Babul Supriyo, Swapan Dasgupta and Rupa Ganguly have been repeatedly attacked. Even the Governor of West Bengal has been shamelessly attacked in broad daylight.

Only a fair investigation can tell if the death of Debendra Nath Roy is a political murder or not. It is well known that Bengal Police is tightly controlled and has previously even obstructed work by CBI. Indeed, CBI officers were illegally held hostage when they went to take statements of Rajeev Kumar, city Commissioner of Police in Kolkata.

In the interest of fairness, this suspicious death should be investigated by CBI under strict supervision of the judiciary. It is important that the cycle of political violence in Bengal is broken in the interest of people as well as democracy itself. Else next year’s assembly elections could descend into an ugly bloodbath.