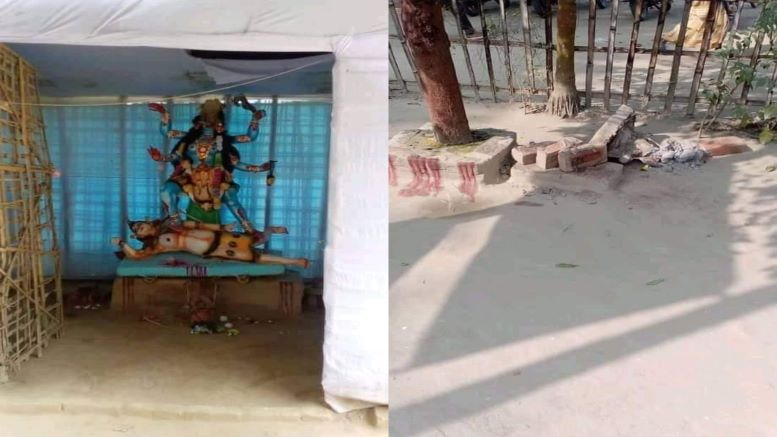 Hindu religious minorities in Bangladesh are facing existential challenges on a daily basis. It has now become a norm for Islamists to issue constant threats to the minority Hindu community residing in various parts of Bangladesh. Islamic extremists are reported to have violently attacked women, religious minorities, journalists, writers, and development workers among others.

On 31st January some local Muslim miscreants at Chinibandar P.S., Dinajpur District, Bangladesh burnt a Hindu temple. They all looted and plundered all the Pratimas (murtis). It must be mentioned here that this kind of incident is a regular affair in Bangladesh with Hindupost having reported the same on several occasions.

A similar incident took place at Kurbanpur, Comilla district, Bangladesh where the Manasa Devi temple was destroyed by local Muslim goons, and the murti was burnt with kerosene. As per available information, local Hindus were attacked and their houses set on fire as they protested against the vandalization of the temple.

It has also come to light that not even Hindu women of that particular area were spared and were raped and molested. Police have arrested two people accused of the incident.

Hindu houses were attacked one after another in Begumganj, Noakhali district, Bangladesh. Islamic radicals have commanded Hindus to leave ‘Islamic’ Bangladesh and go to ‘Hindu’ Bharat at the earliest.

Moreover, a temple built in the year 1992, at West Sardarpara of Joykali Hat in Chittagong was also demolished. Not only this but a school called ‘Gita’ Vidyalaya for local Hindu students has also been destroyed. The allegations have been made against the local BNP leader Zafar Uddin. However, Zafar Uddin said they had demolished temples and schools as they were forced to widen roads in the area. According to the local Hindus, the road expansion and renovation order given by the government often lead to the demolition of Hindu temples and schools.

A couple of days ago, around 50 people under the leadership of Ikramul Amin, a Muslim leader from Shahbazpur in Brahmanbaria District, Bangladesh attacked numerous Hindu houses.

Non-stop attacks on Bangladeshi Hindus are increasing by the day. Expressing deep concern and anguish over incidents, The Hindu Grand Alliance has approached the Sheikh Hasina government of Bangladesh for initiating action in the matter.