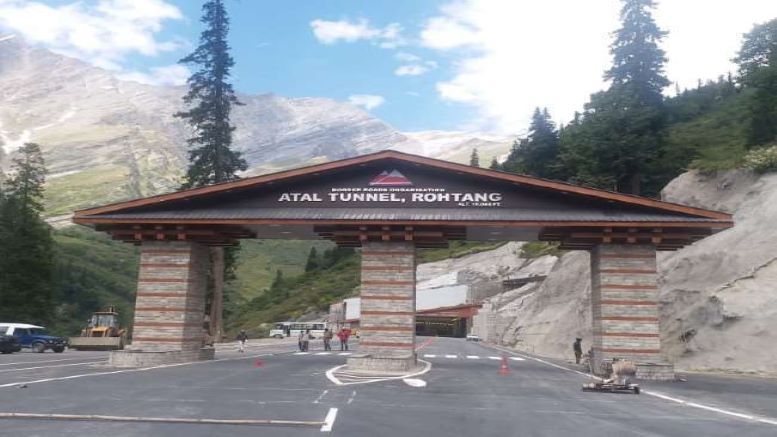 The long-cherished dream of ex-PM Atal Bihari Vajpayee has come to fruition under PM Modi who dedicated the Atal Tunnel to the nation today. This tunnel that has been constructed by the BRO (Border Roads Organization) under the Rohtang Pass has both strategic and civilian significance. Defence Minister Rajnath Singh, Himachal Pradesh CM Jai Ram Thakur and Union Minister of State Anurag Thakur were also present on this occasion.

The credit for this historic decision goes to Shri Atal Bihari Vajpayee who decided to get the tunnel constructed on 3rd June 2000. It is the highest altitude tunnel in the world which the BRO built after overcoming numerous difficulties.

Those involved in the construction not only had to overcome the challenges posed by the terrain but also those that the weather of the region threw at them. The hard work and dedication in completing this herculean task were acknowledged by PM Modi in his speech while inaugurating the tunnel.

This tunnel will cut down the travel time of army personnel to the Ladakh border and help them to reach the Line of Actual Control (LAC) 4-5 hours earlier than they can at present as the distance between Leh and Manali will be reduced by around 46 km.

This will also help the people living in Lahaul-Spiti as it will connect them with Manali. Farmers will reap the benefit as they will be able to ensure that their perishable products reach markets on time.

Besides the difficulties in reaching medical aid to the residents of Lahaul will be eased out due to the tunnel as it will enable to keep the region connected throughout the year. Earlier the roads remained unmotorable for six months of the year owing to snowfall and other unfavourable weather conditions.

The 9.02 km long tunnel has been built using the New Austria Tunnelling Method (NATM) technique. The ultra-modern tunnel is located at about 10,000 feet (3000 metres) above sea level in the Pir Panjal Range of the Himalayas.

Safety measures have also been taken into account such as emergency openings to evacuate people in case of a fire mishap. Other safety measures include 18 egress tunnels, telephone connections at a distance of every 150 metres, auto incident detection system, fire hydrants, CCTVs and air quality monitoring systems among others.

It can accommodate a traffic density of around 1500 trucks per day and 3000 cars each day. These salient features set this engineering marvel apart and mark another milestone in the country’s infrastructure development.

Under the Modi government, several neglected regions of the country have seen a spurt in infrastructure development and the long-pending tunnel below the Rohtang Pass is one among them which has finally come to life. The decade long efforts of the BRO has ultimately borne fruits and is set to help the army as well as the common public of Himachal alike.

The country’s progress always hinges on the kind of infrastructure it possesses and the regions covered by it. No nation can afford any of its citizens to be alienated from development and Bharat is only making strides in this area since the last few years.