PFI hand behind mob attack on police during Assam eviction drive; twice the area of Goa under encroachment 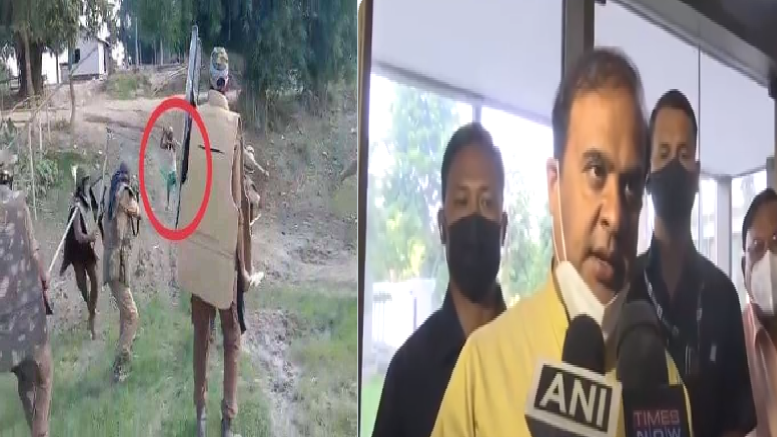 The attack on policemen at Dholpur in Darrang District that forced the police to open fire leading to the death of two Bangladeshi Muslim infiltrators is said to have been instigated by Islamists and ultra-leftists. These infiltrators have been grabbing government and temple land.

Furthermore, it has also come to light that outsiders were involved in the Darrang violence. Assam CM Sarma stated he has proof that outsiders had mobilized people and created havoc. He also said that rupees 28 lakhs had been collected over the past three months from poor and landless families assuring them ‘protection’ from being evicted.

Swarajya quoted a senior police official as saying “The people (who collected the money) told the encroachers that they would pay off government officials and some politicians and, in return, they would not be evicted from the lands they had encroached upon“.

It must be mentioned here that CM Sarma had highlighted that the encroachers had been given adequate time. “The eviction drive wasn’t sudden and the encroachers were given adequate notice. They assured the district authorities that they would cooperate with the drive”, the Assam CM stated while adding that even the opposition had been taken into confidence.

Radical Islamist organization PFI (Popular Front of India) that has links with Islamic terrorist groups is said to be actively involved in radicalizing the illegal Bangladeshis who are themselves extremely radical and believe that Bharat needs to be Islamized.

According to one police officer, Bangladesh-origin Muslims who have illegally entered Assam over the decades are extremely insecure which makes it easy for radical organizations like the PFI to feed on their insecurities and instigate them against the state. It becomes easier to turn them against the country since the infiltrators anyway have no loyalty towards Bharat.

An Assam Special Branch (SB) officer has been quoted as saying “Most of these infiltrators are very radical and have no allegiance towards India. They have been brainwashed into believing that an Islamic emirate is round the corner. They look on Hindus as kafirs (infidels) and India as a land of kafirs that has to be cleansed and made Islamic and pure. Thus, it is very easy to instigate them against state authorities”.

Anti-Bharat ultra-leftists have joined hands with radical Islamists to use the radicalized infiltrators as tools in their seditious plans. According to the SB officer, the ultra-leftists simply want to have a group of anti-Bharat radical elements at their disposal who can be used to revolt against the Bharatiya state and create social unrest when commanded to do so.

The Islamist-leftist nexus that has come to the fore through the Darrang violence episode has left the Assam special branch worried. As per an Intelligence Bureau officer “The Islamists and also the left radicals have strong links with foreign entities and this has grave security implications for Assam and the entire region. The Northeast, and North Bengal which serves as this region’s link with the rest of the country, is very vulnerable”.

The Islamists and leftists are using the radicalized Islamist infiltrators for their common anti-Bharat agenda by inciting passions as attested to by the Assam incident.

The eviction drive and subsequent violence became a convenient excuse for Islamopoligists (Islamic apologists) like Rana Ayyub and ‘fact-checker’ Zoo Bear to spread their agenda. However, they were soon exposed.

It can be clearly seen that the encroacher had rushed at the videographer and police with a machete just seconds back. While the MSM villainized the videographer, it conveniently hid the fact that it was the infiltrator who had initiated the violence.

An OpIndia report quotes the natives in the matter:

A resident of the district named Lakshedhar Nath told a false narrative is being peddled that whatever is happening in Assam is to throw the Muslims out of the state. This is absolutely untrue. Facts are being distorted to malign the state administration, said Nath, adding that in reality, it was a Muslim gentleman who had brought the matter of illegal encroachment on government land in Assam to the attention of the High Court. He was the one who had appealed to the High Court, after which the latter took suo motu cognizance of the issue and asked the State government to act against the encroachers.

Similarly, another resident identified as one Rabindra Kumar Nath divulged how since the year 1975, illegal Bangladeshi immigrants have encroached more than 77,000 acres of land along with a 5,000 years old Shiva temple and a cave.

Prasenjit, the caretaker of the 5000-year-old Dholpur Shiv Temple, in the Garukhuti area near the Sipajhar town in Darrang district in Assam, where the incident occurred on September 23, also told the channel that people of the Hindu community have been settled in and around the temple area for years. Ahead of the 1983 Assam elections, the Congress government brought the Bangladeshis and settled them here for votes, rued the Shiv Temple caretaker.

Twice the area of Goa encroached in Assam

In 2017, then junior revenue minister Pallab Lochan Das had stated in the Assam assembly that 6652 sq km of land in the state had been encroached upon. This would approximately amount to twice the area of the entire state of Goa or just short of the state of Sikkim highlighting the extent of land grab by illegal Bangladeshis.

As per reports, among the encroached land are huge tracts of land belonging to Vaishnavite Satras (Hindu monasteries), and Hindu temple lands, 3172 sq km of forest land along with land belonging to the government.

It must be mentioned here that the state government had set up a panel under the chairmanship of former Chief Election Commissioner HS Brahma to suggest modifications in the laws and a policy for ensuring the protection of land rights of indigenous people.

The report by the panel stated “day in and day out, new areas are encroached upon by thousands of illegal Bangladeshis. Organized swarms of land-grabbing suspected Bangladeshis… equipped with construction materials and arms descend on vacant char areas (riverine islands) to establish illegal villages overnight and efforts of indigenous people to resist such organized invasions are meet with counter-resistance and armed attacks.”

Sentinel Assam brings forth the history of illegal infiltration into Assam from Bangladesh which has its roots in the colonial decision of merging Assam and erstwhile East Bengal.

Assam has been witnessing an invasion by hordes of land-hungry Muslims from erstwhile East Bengal, erstwhile East Pakistan and present-day Bangladesh since Lord Curzon had clubbed Assam with Eastern Bengal to create a new province in 1905. Though that decision was revoked in 1911, the floodgates have remained open for more than a century now.

The demography of Assam has been dangerously altered, the environment – forests, wildlife sanctuaries, National Parks, PGRs, VGRs, government land, land belonging to Assamese monasteries and other religious institutions – have been seriously affected, in many districts, the indigenous communities have been reduced to a minority, crime patterns have changed, abduction and conversion of girls of indigenous communities have become a routine problem, not a single Hindu temple has been spared by thieves and burglars, democratic politics has been changed – all because of the large-scale influx of land-hungry Muslims from the neighbouring country.

The site also mentions ICS officer SC Mullan who had warned about the imminent danger of the largescale influx of Bangladeshi Muslims way back in 1931. Mullan had said:

Probably the most important event in the province during the last twenty-five years – an event, moreover, which seems lively to alter permanently the whole future of Assam and to destroy more surely than did the Burmese invaders of 1829, the whole structure of Assamese culture and civilization – has been the invasion of a vast horde of land-hungry Bengali immigrants; mostly Muslims, from the districts of Eastern Bengal sometime before 1911 and the census report of that is the first report which makes mention of the advancing host…

…it is sad but by no means improbable that in another thirty years the Sibsagar district will be the only part of Assam in which an Assamese will find himself at home.

There has been a consistent attempt by Islamists from Bangladesh to grab Bharat’s land as admitted by Zulfikar Ali Bhutto that Pakistan was eyeing Assam as well along with Kashmir. In essence, there is a sinister plot by Bangladeshi infiltrators to grab Bharat’s lands and push out the Hindu majority from Assam with active help from anti-national Islamist-leftist groups.