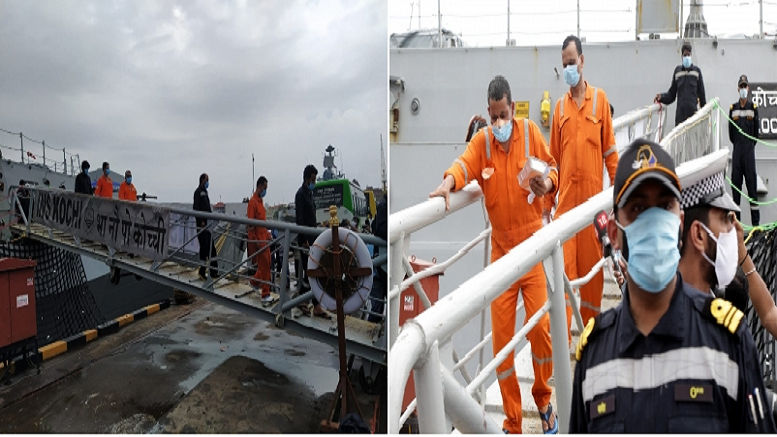 Mumbai Police has lodged an FIR invoking charges of culpable homicide not amounting to murder against the master of the Barge Papaa-305 and others in connection with the vessel tragedy in the Arabian Sea which left at least 60 dead and many more missing, officials said on Friday.

Yellowgate Police have acted on a complaint filed by barge chief engineer Rahman H. Shaikh who was among the survivors rescued by the Indian Navy earlier this week even as Oil & Natural Gas Corporation Ltd (ONGC) and Afcons Infrastructure Ltd (AIL) announced compensation for the victims.

The development came two days after the police launched its probe based on an accidental death report to ascertain why the barge allegedly failed to adhere to safety norms despite warnings of the impending Cyclone Tauktae which wreaked havoc on the country’s west coast last Sunday onwards.

Besides culpable homicide not amounting to murder, the barge master and others are also charged with common intentions, negligent acts causing hurt to others, etc, said Mumbai Police spokesperson, Deputy Commissioner of Police S. Chaitanya.

Of the 342-plus offshore installations of the ONGC, including 243 fixed and the rest floating, five of the latter including barge Papaa-305 were caught in the turbulence of the cyclone and the vessel sank late on Monday.

A spokesperson for ONGC said that it will provide an immediate relief of Rs 1 lakh to all survivors and Rs 2 lakh to the families of the deceased or missing.

AIL announced comprehensive compensation package for those deceased on the company rolls and also those who were employed with sub-contractors.

The deceased, including its employees, would get a total compensation equivalent to the balance period of service upto 10 years’ service combined with ex-gratia and insurance, which could range between Rs 35 lakh to Rs 75 lakh per family of the deceased.

Additionally, the AIL would form a Trust to take care of the educational needs of the children of the deceased through scholarships besides arranging trauma and grief counselling to help the families tide over the loss of their dear ones.

ONGC and maritime sources said that during the Cyclone Tauktae fury, there were an estimated around 10,000 people in and around the vicinity of the Bombay High Fields, around 175 kms off Mumbai.

These included over 7,600 people of the ONGC, 1,290 of Afcons Infrastructure Ltd, and the others on smaller barges or supply vessels providing various types of services on the high seas at the BHF.

Of the total human presence in the BHF region, around 6,900 were on different types of 94 floating vessels, and the rest on the ONGC’s fixed installations like oil rigs, drills or platforms, which did not suffer known damage or report any human casualties.