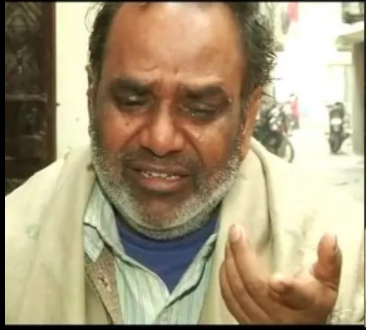 The murder of Ankit Saxena by his Muslim girlfriend’s family shocked the entire nation. Ankit was the sole child & bread-winner for his aged father and mother, who are now distraught and in shock. Delhi CM Kejriwal can be heard on radio ads these days talking about Ankit Saxena’s and Nirbhaya’s death and exhorting common citizens to not be passive bystanders when such crimes happen.

Yesterday, Kejriwal attended Ankit’s mourning ceremony (teravhin -ceremony held on the thirteenth day after the death). However, when Ankit’s family members requested the CM to provide compensation for the poor & aged parents who are now struggling for livelihood, Kejriwal refused to talk on the issue and left the ceremony mid-way, even as Ankit’s father and other relatives called out to him to talk with them.

Kejriwal insulted and walked out when father of #AnkitSaxena wanted to talk to him.

In a conversation with ABP News, Ankit’s father Yashpal Saxena broke down and started crying in the middle of the talk. He said, “I am mentally disturbed, I don’t know what is true…people tell me different things. Either leave me to my fate – if I get compensation, that’s fine..if not, that is also fine. Just don’t make a ‘tamasha’ (spectacle) out of me. That knife (used to slit his son’s throat) killed 3 people..me, my wife – she is a living corpse now. The pain inside me made me say yesterday not to play games with me. I used to think Kejriwal was my sympathizer.”

After being criticised, the Delhi government announced Rs 5 lakh for Ankit’s kin but it was rejected by the family. They reminded the CM about earlier generous compensations provided by the CM, such as Rs 1 crore for the family of ex-serviceman Ram Kishan Grewal who had committed suicide over the issue of ‘One Rank, One Pension’ (OROP), and  Rs 1 crore to the family members of the NIA police officer, Tanzil Ahmed, an employee of Central government who was murdered in UP along with his wife in a private property dispute.

AAP soon started a slander campaign against ABP editor Milind Khandekar for airing the interview with Yashpal Saxena. A hashtag #PAK_Agent_Milind_ABP appeared soon after the interview was aired by ABP News, and several AAP social media head Ankit Lal and several supporters were seen criticising ABP for ‘dividing India into Hindu-Muslim as per Pakistani designs’.

We wonder whether the liberal-secular cabal will discuss these pained words by Yashpal Saxena expressing disappointment with secular poster-boy Kejriwal, with the same enthusiasm that they reported the disturbed father’s earlier comment “Even If I Don’t Get Justice, Won’t Have Hatred Against Any Community” These same media vultures had earlier reported murders like that of Mohammed Akhlaq and Junaid Khan as confirmed “hate crimes”, overlooking the personal nature of the disputes that led to those murders. They happily reported inflammatory statements like “How Could they Hate Us so much?” by Junaid Khan’s distraught family…was that not inflammatory, communal and polarizing?

Our liberals and seculars are by & large an immoral, despicable breed – they are hypocrites of the highest order, who will not hesitate to apply their ideological filters to present events as they wish. So when an Akhlak or Junaid dies, their goal is to drive victimhood and persecution within Muslims while shaming Hindus for ‘hating the other’ & ‘electing Modi’; but when an Ankit or the Bolpur rape victim die, their focus shifts to ensuring the incident is not ‘communalized’ & ‘politicized’ – again, the moralizing is reserved for Hindus who are asked ‘not to stereotype others’ and ‘to allow law to take its course without jumping to conclusions’.

Hindus of all hues and political affiliation should come forward to help the Saxena family – unless we collectively mobilize on a social and political level, we will continue to be taken for granted & begging for crumbs from unscrupulous politicians.