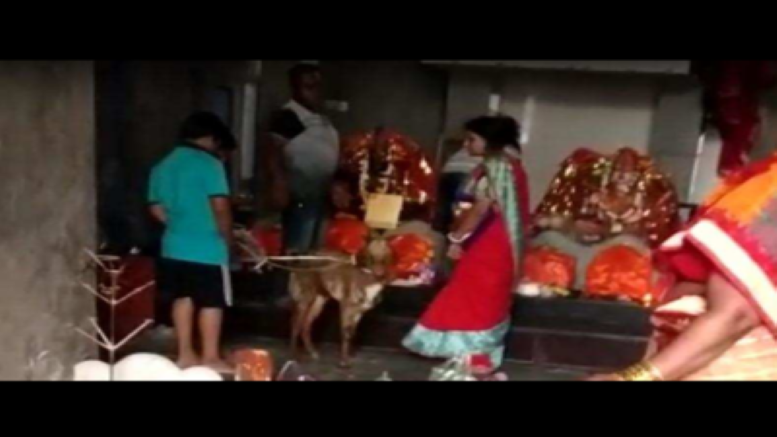 A case has been registered for animal sacrifice against Durga Saptashakti Temple located in Kamptee, a suburb of Nagpur on the basis of SPCA (Society for Prevention of Cruelty to Animals) activist Karishma Galani seeking the intervention of MP Maneka Gandhi’s intervention in the case.

The incident came to light when 24-year-old Srushti Chahande Dhoble who was passing by the temple on Tuesday afternoon heard the wailing of animals and entered the temple to find three garlanded goats tied up and supposedly waiting to be sacrificed. Dhoble also stated that along with several villagers, many children were also present within the temple premises.

Dhoble and the locals ended up having an argument when she began filming the act and was allegedly denied entry into the temple by the locals. Dhoble is said to have sought activist Galani’s intervention who in turn contacted MP Maneka Gandhi. Gandhi then directed the local cops to act on the complaint immediately and initiate action in the case.

Following the MP’s order, policemen reached the temple and seized two goats when Dhoble alleged that one of the goats had already been sacrificed. An FIR has been registered by the Kamptee against unidentified persons under various provisions of the Indian Penal Code (IPC), Prevention of Cruelty to Animals Act 1960, and Maharashtra Animal Preservation (Amendment) Act 1995. Also, further investigation is underway.

In the meanwhile, Maneka Gandhi has issued a statement saying “sacrifice of animals at any religious place across the country is illegal. Though the number of cases has gone down, such acts are still taking place. The police have become active and are stopping the sacrifice of animals after getting tip-offs. It is a cruel act and there is no need to please god through the bloodbath. People should stop taking the lives of other living beings” reports ToI (Times of India). She even warned of strict action against the perpetrators of such acts.

While the concern of Maneka Gandhi for animals is welcome, one cannot help but wonder how come sacrifices of a huge number of goats, cows, camels and other animals on the occasion of Eid does not evoke the same concern from either the MP or the so-called animal rights activists who conveniently look the other way. Is concern for animal cruelty also religion-based?

Hindupost had earlier pointed out how animal sacrifice laws vary for Hindus and minority communities. High Courts across several states had banned animal sacrifices in temples while allowing Muslims to mercilessly slaughter animals on the occasion of Bakra-Eid. As stated earlier:

“there should be a higher degree of concern about the brutal manner in which Bakr-Eid sacrifices are conducted. Nothing spells cruelty more than lining up innocent animals for slaughter and slowly torturing them to death.

While the Islamic Halal slaughter requires the jugular vein to be severed using a single cut but with multiple knife strokes thereby bleeding the animal to death, the Dharmic Jhatka slaughter (employed by Hindus and Sikhs) severs the head with one fell swoop of a sword or axe.

It has been scientifically proven that unlike the Halal method, Jhatka causes only a fraction of the pain as the sensation of pain is lost immediately in the latter and the pain is transmitted to the brain till the time the animal dies in case of Halal slaughter”.

So while activism by SPCA, Dhoble, and MP Maneka Gandhi is welcome, it is hoped that they would be equally concerned with the cruelty shown to animals during Eid as well as slaughter has no religion and if anything animals tend to suffer more while being slaughtered using the halal method adopted during Eid.

Sikh boy (14) coerced to accept Christianity, threatened to have his hair cut forcibly when he refused: Ahmednagar