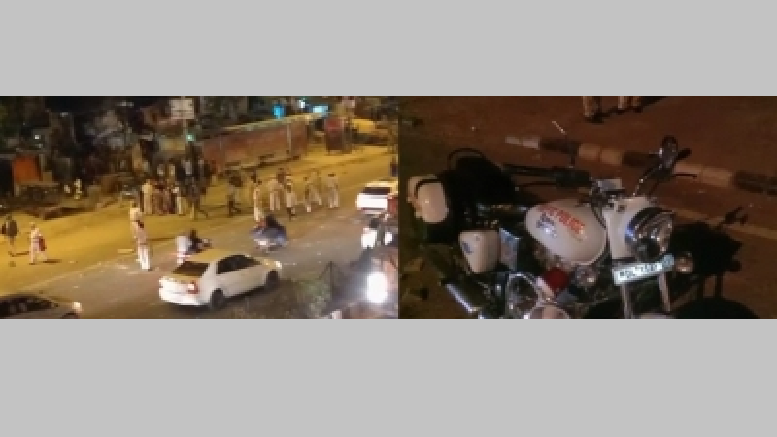 A mob of around 150 people that gathered in Delhi’s Ashok Vihar against the sale of narcotics clashed with the police, leading to the injury of 8 personnel while they were trying to bring the situation under control.

Senior police officials have said that it was a personal issue that later turned into a riot-like situation.

According to one of the officials, a police patrol team near the Prem Bari Pul noticed a gathering of residents of AO Block Shalimar Bagh on the opposite site at around 10.30 p.m. on Wednesday night.

During the same time, a PCR call was also received regarding a traffic jam the area.

“SI Prem Prakash along with accompanying staff immediately rushed to the gathering side. Local police of Shalimar Bagh and nearby police stations also reached at the spot. District reserves and police force were also mobilised,” the official said.

The official said that during enquiry, it was revealed that one Santosh, 23, had a tiff with three drug addicts who were standing near the Prem Badi bus stand. Santosh then called the local residents of the area, who came to the spot and blocked traffic.

“They were getting agitated and were also raising slogans aggressively. The police tried to pacify the crowd of around 150-180 people, but they started to disrupt the flow of traffic and sat down on the road. When the police tried to remove them from, some of the miscreants resorted to pelting of stones and bottles on passers-by and police personnel. They also tried to put fire to one traffic motorcycle but the blaze was immediately doused. They also broke glasses of three to four police vehicles,” the official added.

The situation was brought under control by resorting to the use of mild lathi charge.

Nine persons, including eight police personnel, who were injured were discharged from the hospital after being treated.

The police have so far detained 27 people for their involvement in the case.