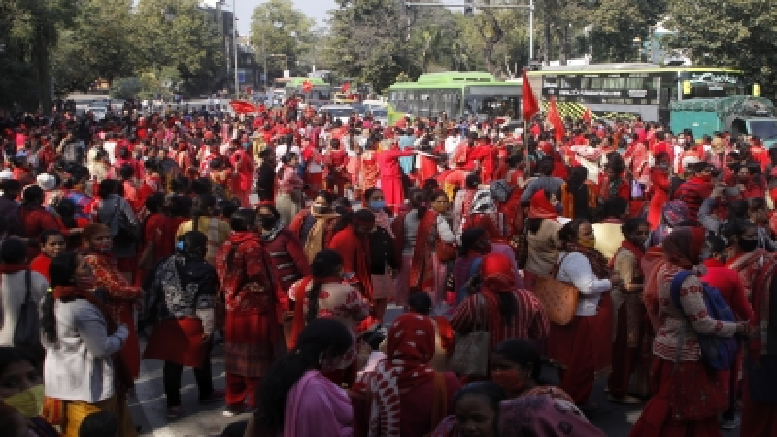 Hundreds of Anganwadi workers and helpers continued their protest in national capital as the Delhi government’s meeting with the unions representing them proved to be inconclusive.

Delhi State Anganwadi Workers and Helpers’ Union on Tuesday took out a procession ‘Chetawani Maharally’ on the 23rd day of their protest from Civil Lines to Delhi University Metro station.

“Tuesday was the 23rd day of the protest by Delhi Anganwadi workers. More than 18,000 anganwadi workers across Delhi took out a ‘Chetawani Maharally’ to express their anger against the Delhi government. The main objective of the ‘maharally’ was to show resistance against the ‘fake talks’ between the workers’ union and the Delhi government on February 21,” said Priyambada of Delhi State Anganwadi Workers and Helpers Union.

She added that thousands of anganwadi workers of Delhi have taken out a ‘Khabardar rally’ on February 11 after which the Delhi government invited them for talks. Centre of Indian Trade Union’ (CITU) was also invited for talks, which has no basis among the anganwadi workers. During Tuesday’s rally, slogans were raised against Delhi government’s adamant attitude and CITU.

Priyambada said the rally started from Civil Lines, Vikas Bhawan and extended to Chief Minister Arvind Kejriwal’s residence after which it marched back through the Delhi University and then again reached Vikas Bhawan Gate number 2 through Delhi Vidhan Sabha.

“It is our constitutional and judicial right to form unions, hold protests and choose our representation. No one can take away this right from us,” she added.