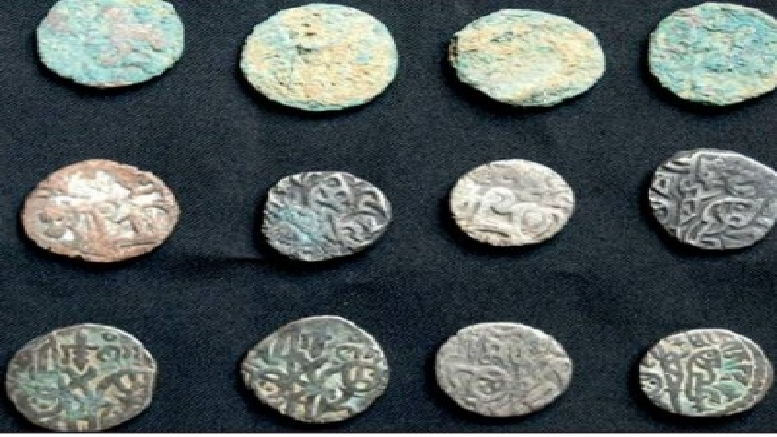 Amit Rai Jain, a Baghpat-based businessman, has found 16 coins made of silver and copper which have a bull and a horseman engraved on them.

He found the coins from a mound, known locally as the ‘Katha mound’ in Khekhra, close to the Delhi-Saharanpur highway, on Sunday.

Jain told reporters that some of the coins are from the late 12th century AD, which is the era of Rajput king Prithviraj Chauhan.

“I keep frequenting the area, which is rich in archaeological finds. This time, it revealed something considered fascinating in Indian numismatics. The coins which I found belong to a series of Rajput rulers who remained dominant in the region comprising Rajasthan, Haryana, and the western Gangetic plains from the eighth century to 12th century AD,” he said.

Jain, is a member of the Culture and History Association, an organisation comprising historians from western Uttar Pradesh.

K.K. Sharma, head of the department of history, Multanimal Modi College, Modinagar, confirmed the antiquity of the coins.

“This is an interesting find as the area remained with the Rajput kings for a couple of centuries. Horse and bull inscriptions on coins were quite common in those days. Horses used to be the primary vehicle of soldiers during battles and their depiction on coins is not a surprise. In fact, close to two dozen rulers between the seventh and 17th centuries used horses in some form or the other on their coins,” he said.

Baghpat is well-known for the discovery of interesting historical artifacts, the most sensational being three chariots unearthed during the Archaeological Survey of India excavation held in Sinauli in June 2018, which marked the ‘first-ever’ physical evidence of Bronze Age chariots in Bharat.

In 2006, Sinauli had revealed Harappan-era burial grounds where several discoveries were made such as that of painted grey ware pottery, skeletons, bronze swords, and copper vessels.

(The story has been published via a syndicated feed with minor edits to conform ro Hindu-Post style-guide.)