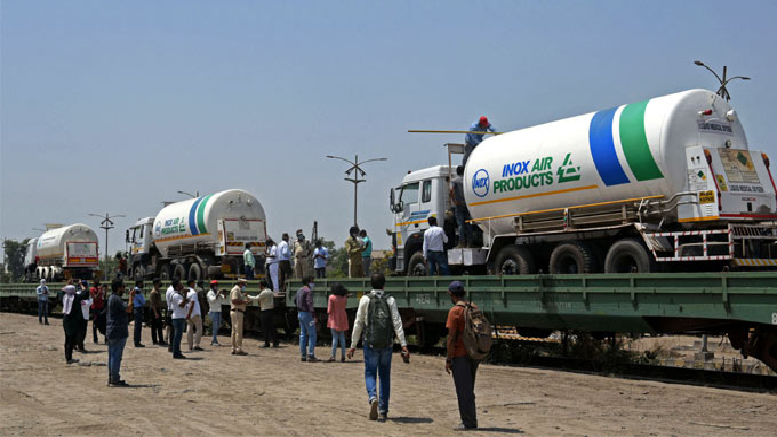 Even as cyclone Tauktae hit several parts of Gujarat, the Indian Railways on Tuesday loaded 158 MT of liquid medical oxygen (LMO) from the state for Delhi and Andhra Pradesh, officials said.

A Railway Ministry official said that beating the odds, the first Oxygen Express from Gujarat to Andhra Pradesh started at 6.25 p.m. even as the severe weather persisted.

He said that the Oxygen Express with a load of more than 65 MT of LMO having four tankers left from the Reliance Rail Siding in Rajkot for the Guntur CONCOR siding in Andhra Pradesh.

Another Oxygen Express with 103 MT of LMO in five tankers departed from Rajkot division to Okhla in New Delhi, he said.

The official said that Oxygen Express departed from the Reliance Rail Terminal in Rajkot’s Kanalus at 1.40 p.m.

Earlier in the day, Ministry officials said that railways had delivered the biggest single day load of more than 1,000 MT LMO by Oxygen Expresses.

Oxygen Expresses had been delivering nearly 800 MT LMO to the nation each day for last few days, an official said.

He said that in over 24 days, Railways has upscaled its Oxygen Express operations to deliver more than 11,030 MT LMO to 13 states in more than 675 tankers.

The official said that 175 Oxygen Expresses have completed their journey so far, bringing relief to various states.