In a highly inciting and communally charged video that has been widely shared and cheered by many Muslims, AIMIM supporter Abu Faisal can be seen provoking his followers to engage in all kinds of violence against doctors during the Covid-19 pandemic, and threatened Hindus with an impending genocide.

In the 30 min Facebook live video (a shorter YouTube version can be seen here), Abu Faisal begins by saying that he would reveal the ‘conspiracy’ by the Bharatiya government against Muslims using the pretext of Coronavirus.

He says ‘action’ against them (Hindus) has started in Gulf countries and Middle-East, alluding to arrest of a priest named ‘Sudhir Pandey’, who he claims is Bhagwat’s (RSS chief) brother. Faisal says “he was arrested yesterday in Dubai, they might have beheaded him by now, or maybe his arms and tongue would be cut off.”

In March 2019, a Mahant Sudhir Das Pujari of the Kala Ram temple of Nasik, who has business interests in UAE, was briefly detained in Dubai before being released and allowed to return home. The businessman priest had contested LS elections on a BSP (Bahujan Samaj Party) ticket in 2009, but is alleged to be close to RSS-VHP by the Congress ecosystem.

Faisal says that the arrested man ‘transferred 3 billion Dirhams (~815 million USD) into Bhagwat’s account.’ The AIMIM follower, whose FB page has a photo of the Owaisi brothers, then plays an audio recording which he claims exposes the ‘Coronavirus conspiracy’.

The phone recording is between an unnamed man who claims to be calling from UP. He is talking to a man who identifies himself as Sant Yuvraj, head of Hindu Sena (Hindu Army). Now, a man called Sant Yuvraj did surface towards end of 2018 (just before 2019 LS election) through a video where he expressed anger with Modi Government, RSS and VHP for obstructing Ram Mandir ‘settlement’ with Muslims, and where he claims to have almost managed to assassinate Pervez Musharaff during the later’s Bharat visit during NDA-1 govt. Later, ‘Sant’ Yuvraj also alleged that Modi was conspiring to have him killed, and that BJP had planned the Pulwama terrorist attack.

In the recording played by Faisal, the unnamed person asks the man who claims to be Sant Yuvraj why ‘so many Muslims are being forcibly taken away over Coronavirus.’ Yuvraj tells him to not record their conversation and claims that the Government is using the Coronavirus to create the ‘Hindu-Muslim virus.’ He says that Muslims are being defamed, ‘lies’ are being spread that Muslim vendors are spitting on fruits and vegetables, and the pandemic is just a tool plotted by the RSS to eliminate Muslims from Bharat.

Yuvraj says that Muslims are first thrashed (after being taken to quarantine centres), then the children and elderly are let off, but the young and middle-aged adults are given ‘slow poison’ through injections to either make them impotent or kill them in a few days. He alleges that Sushma Swaraj was ‘murdered’ in the same fashion by the conspiring government.

He says that Hindus in his locality had attacked police during lockdown but were let off, whereas if Muslims clash with police then police sends all of them to quarantine and the incident makes it to news. Yuvraj decries this ‘injustice’ with Muslims. He says Ram Mandir is being built by fraud and dishonest means, and vows to ensure that Modi doesn’t return in 2024. He ends the call by asking the other person to note down the name and police station detail of every policeman who is beating or misbehaving with Muslims, so he can ensure they get suspended.

Continuing his live video rant, Faisal then forbids all Muslim women from taking any injection if given to them by doctors during Coronavirus treatment and claims that these injections are designed to render the Muslim women sterile.

Referring to Hindus as “swines”, “cow piss drinkers” and using choice abuses, he threatens to destroy saffron. Abu Faisal says that cow’s urine runs in the body of Hindus and they are a blot on humanity, and only Muslims had brought recognition to the country.

He convinces his thousands of Muslim followers that the Covid pandemic is just a means to render Muslims jobless, damage their businesses and restrict their movement. He also hurls vile abuses on news anchors like Rubika Liyaquat, Anajana Om Kashyap (he calls her last name ‘Modi’), Sudhir Chaudhary, Amish Devgan, Arnab Goswami.

Fulminating in a live video session that continued for 30 minutes, the AIMIM supporter Abu Faisal continued flinging profanities at Hindus and threatening them of dire consequences. Insinuating a Hindu genocide in the offing, the radical Islamist from Hyderabad declares that Muslim women peel and chop vegetables with swords and that Muslims will not sit quiet when the time comes. Faisal says he is so angry right now that he will rip Hindus apart, and pull their intestines out, if they come in front of him. These people (Hindus) will not see the coming year, he says.

Now, sample some of the reactions this genocidal rant has garnered – 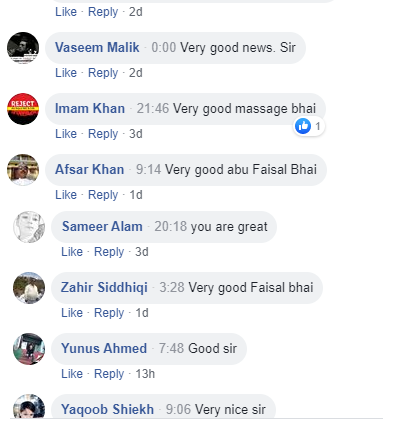 It is not just the insane monologue of one rabid Islamist that poses a threat to society and Hindus in particular, but the herd mentality observed in the comment section and shares. A large number of  Muslims appear convinced by such propaganda and hence we are witnessing repeated attacks during Covid-19 lockdown in Muslim-dominated areas against health workers, police and doctors. Just last month, AIUDF MLA Aminul Islam had been arrested in Assam for spreading rumours that Covid-19 is a conspiracy to target Muslims and those sent to quarantine could be killed.

The Hyderabad Police, which had lodged an instant FIR against a Hindu twitter user over a sarcastic meme, has not taken any action as yet against this venom-spewing radical. Does a threat to commit genocide, spreading fake nonsense against doctors, dismissal of a serious pandemic, not constitute a serious offence for the city’s police? Or do Hindu lives not matter in the city of Asaduddin Owaisi?