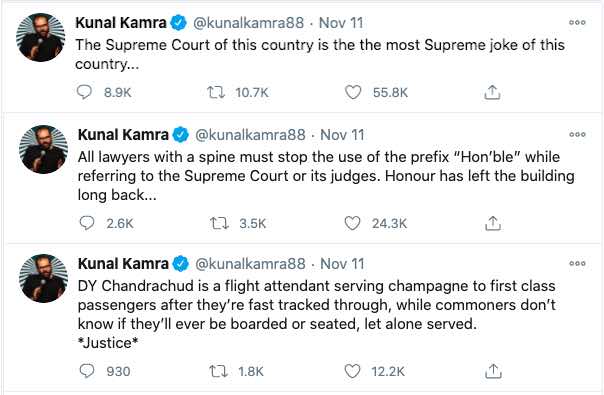 And the AG KK Venugopal has just given his consent – 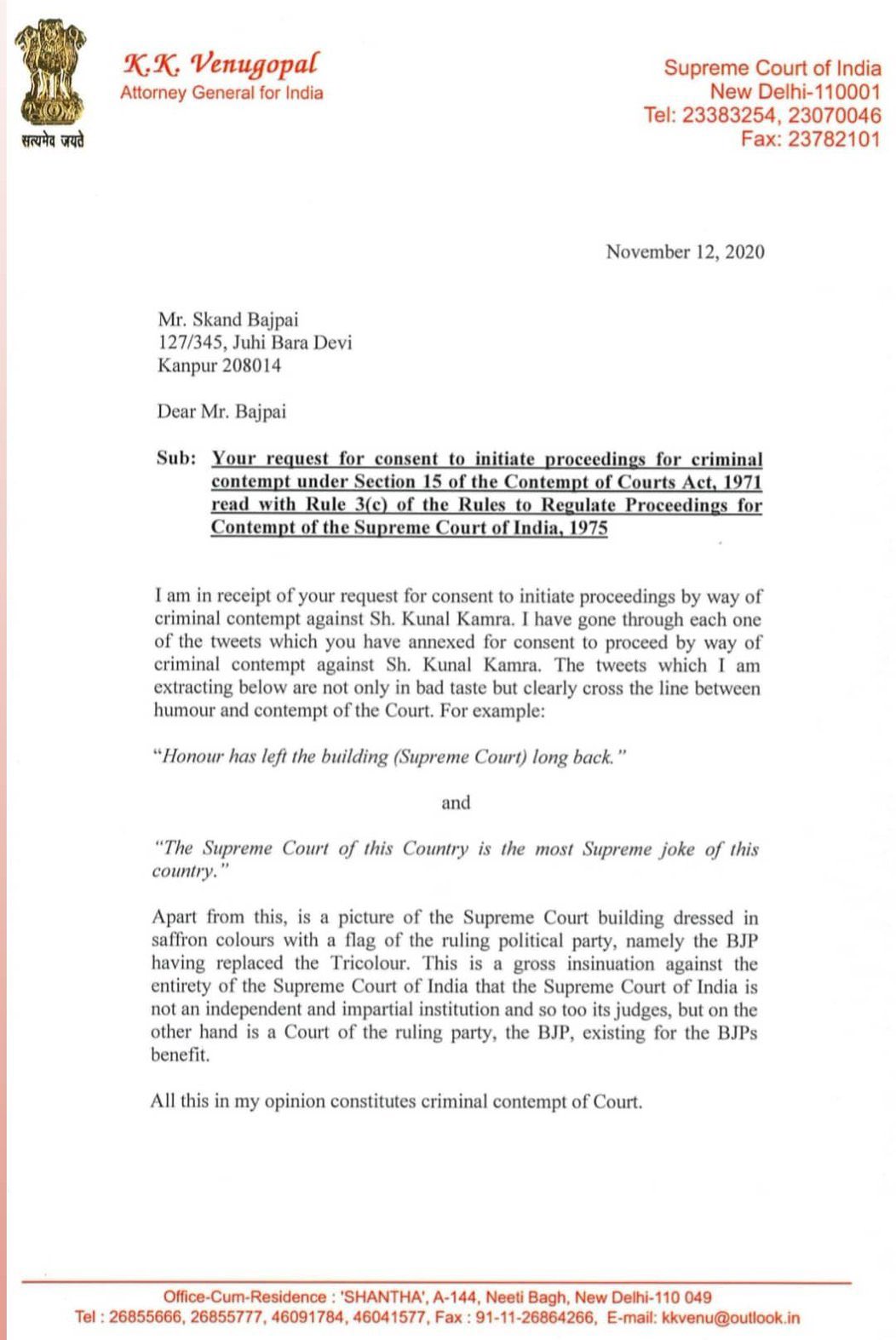 In August, Venugopal had refused sanction to prosecute actress Swara Bhasker for contempt of court over a remark she made during an anti-CAA meeting where she had criticised the SC for its Ram Mandir judgement and said, “our courts are not sure whether they believe in the constitution or not.”

A month later, the SC found eminent Lutyens lawyer Prashant Bhushan guilty of serious contempt of court for tweets where he had cast aspersions on the CJI and stated that democracy in the country was being destroyed with an emergency-like situation being created with the active support of the SC (Supreme Court) and the last four CJIs (Chief Justices of India). However, after weeks of dilly-dallying about the quantum of punishment and pleading with Bhushan to apologize, he was let off with a token one-rupee fine.

Kamra is known for his abusive brand of ‘comedy’ and has been known for unhinged attacks in the past against PM Modi and others. In one of his shows, he called for the British to re-colonise Bharat, apart from mocking Hindu Gods’ “inability to defend themselves.” That delusional rant was lauded as brilliant political satire by a diverse crowd of left-liberal-seculars ranging from Prashant Bhushan, Vishal Bhardwaj, to NCP strongman Jitendra Awhad.

After positioning himself as a woke SJW (Social Justice Warrior), Kamra had hurriedly deleted tweets containing jibes on Muslims and Sikhs, and even temporarily deactivated his account. Kamra is part of a tribe of such comics whose entire comedy revolves around cuss words, denigrating Hindu deities and abusing the PM, Ambani and other hate magnets for this Hinduphobic cabal.

Kamra has in the past also been banned by 4 domestic airlines for heckling Arnab Goswami onboard a flight.

The ire of this cabal at Arnab being released on bail after ‘just’ 6 days, in what is clearly a case of political vendetta by the Maharashtra government, is that they cannot stomach the institutions which they consider their home turfs – judiciary, media and academia – not behaving as per their diktats at all times.

One among the many false equivalences being drawn is that Arnab was released on bail whereas a Kerala journalist Sidhique Kappan who was arrested by the UP police when he was on his way to ‘report’ on the Hathras case was denied bail by the SC. Kapil Sibal, appearing for Maharashtra govt., brought up Kappan’s name during the SC hearing yesterday.

So, who is Sidhique Kappan? As we reported in our coverage of his arrest –

Sidhique Kappan from Malappuram in Kerala tried to play his journalist card to avoid being arrested. Kappan is the PFI’s Delhi Shaheen bagh office secretary and also writes for a little known online website based out of Kerala called Azhimukham and is an old employee of Thejas news. Thejas news is the media arm of PFI and Azimukham largely supports the same ideology, although it claims differently.

Kappan is also the Secretary of the Kerala Union of Working Journalists (KUWJ), New Delhi Unit.  Entry into the KUWJ is highly restricted and until recently journalists belonging to the broadcast media were not even allowed into the union. Now it seems, the KUWJ has also come under significant influence of PFI. This explains why Kappan, who is not associated with any of the major newspapers or TV channels, is the Secretary of the KUWJ New Delhi Unit.  As soon as the news of his arrest came out, his friends started demanding his release. Incidentally, a majority of the office-bearers of the KUWJ are from Islamist or Marxist leaning media organisations.

What is astonishing is that most media publications did not have the guts to portray Kappan as a PFI activist, and instead they preferred to mention his journalistic credentials.”

The entire Hathras incident provides crucial insight into how the anti-Hindu ecosystem operates – a tragedy was distorted to give it the color of caste oppression, and the victim family was cynically manipulated. PFI, if readers have forgotten, is the same radical Islamist organisation which had a major hand in the anti-CAA riots that rocked Western UP, Delhi-NCR and other parts of the country in the Dec-Feb period. Would such an organisation pass up a chance to stoke caste tensions?

Similarly, some are drawing equivalence with ex-Wire journalist Prashant Kanojia who spent 2 months in jail earlier this year for a case where he morphed someone’s social media post to give it an anti-SC/ST twist. But what is being brushed under the carpet is that Kanojia was granted immediate bail last year by the Supreme Court in another case where Kanojia had implied a romantic relations between a woman and UP CM Yogi Adityanath, a Hindu monk sworn to celibacy. Kanojia is a repeat offender when it comes to abusing Hindu Dharma – in the past, he has made comments like ‘Dalits who go to Hindu temples are animals with no brain’, ‘Hinduism is a useless religion’, ‘Kill all Hindu saints’ on social media.

Yet another false equivalence being drawn is between Arnab Goswami and the Maoist-Naxal leaders in the 2018 Bhima-Koregaon riots case who are in jail under grave provisions of Unlawful Activities Prevention Act (UAPA) with chargesheet filed against them containing charges ranging from Conspiracy against the state to assassination of the PM. One leading Naxal, Gautam Navlakha, ex-editor of Economic and Political Weekly journal, was initially granted protection from arrest by the Supreme Court and the Bombay high court for over 18 months, and finally surrendered before an NIA court after running circles around the country’s top investigative agencies and exhausting all legal options.

The truth is that Maharashtra government re-opened a closed abetment to suicide case to fix Arnab Goswami. Their gripe is the way Goswami has targeted the Uddhav Thackeray-led MVA government over its mis-handling of the Palghar lynching, Covid-19 lockdown and other issues. Mumbai Police Commissioner Param Bir Singh has tried to implicate Republic in the fake TRP scam whereas the plaintiff had actually accused India Today of fraud! Singh has even given bizarre statements like calling Goswami the biggest hawala operator in Mumbai.

The truth is that it is ordinary Hindus who lack the access to top corridors of justice that Breaking India anti-Hindu figures like Teesta Setalvad, Navlakha, P Bhushan enjoy. It is people like Priyanka Sharma, Sunny Gupta, Sameet Thakker, Kamlesh Tiwari and many others whose cases are actual examples of the double standards that exist in the country.