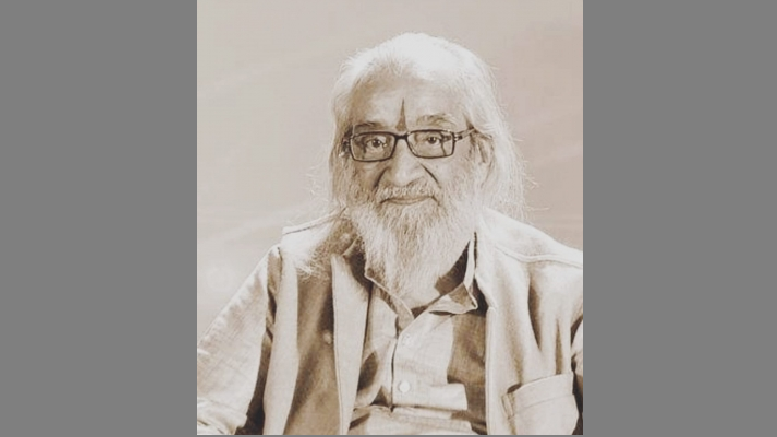 Decorated with the Padma Vibhushan, Purandare — who turned 100 on July 29 — breathed his last at the Dinanath Mangeshkar Hospital & Research Centre, around 5.07 a.m., stunning the state’s political, literary and art circles.

From dawn, thousands of his admirers queued up outside his Pune home where his body is kept for people to catch a final glimpse.

A sea of humanity was witnessed when the mortal remains of ‘Shivshahir’ (Shivaji’s bard) Purandare were taken for the last rites at the Vaikunth Crematorium, where he was accorded a funeral with full state honours.

On July 29, a major function was organised in Pune to felicitate him for entering the milestone 100th year of his life, by Maharashtra Education Society and Itihaas Premi Mandal.

At the time, Purandare — known for his bold views and courting controversies — recalled some anecdotes of his childhood years and expressed a desire to live a few more years to serve society.

Born on July 29, 1922 at Saswad near Poona (now, Pune), Purandare was fascinated by Chhatrapati Shivaji Maharaj from an early age, penned essays and stories which were later published in a book form, ‘Thinagya’ (Sparks).

In over eight decades of his writing and theatre career, Purandare delivered more than 12,000 lectures on Chhatrapati Shivaji Maharaj, studied all the forts and history of the Maratha Empire, making him an authority on the subject.

He scripted and directed a historical play ‘Jaanta Raja’ (1985) a theatrical magnum opus, performed by over 200 artistes, elephants, camels and horse on the stage.

The much-applauded play has been translated and enacted in five languages, clocking over 1,250 stage shows in Maharashtra, Goa, Delhi, Uttar Pradesh, Andhra Pradesh and the United States.

In 2008, his two-volume book (“Raje Shivchhatrapati”) was adapted as a hit television serial in Marathi — ‘Raja Shivchhatrapati’ — with a Pune medico-turned-NCP MP Amol R. Kolhe playing the title role.

Among the host of awards that Purandare bagged in his lifetime included the ‘Maharashtra Bhushan’ (2015) and the country’s second highest civilian honour ‘Padma Vibhushan’ (2019).

Earlier in the day, Modi and Thackeray mourned the passing of the literary giant.

“I am pained beyond words. His demise leaves a major void in the world of history and culture. It is thanks to him that the coming generations will get further connected to Chhatrapati Shivaji Maharaj,” said Modi.

“Even if you search, you will not find such a devotee of Shiva immersed in his meditationa The Shiv devotee is now at Shiva’s feeta My deepest respects and condolences on the passing of Shivshahir Babasaheb Purandare,” said Thackeray.

The Prime Minister described Babasaheb Purandare — with whom he had the honour of interacting very closely over the years, including his birth centennial in July — as “witty, wise and having rich knowledge of Indian history”.