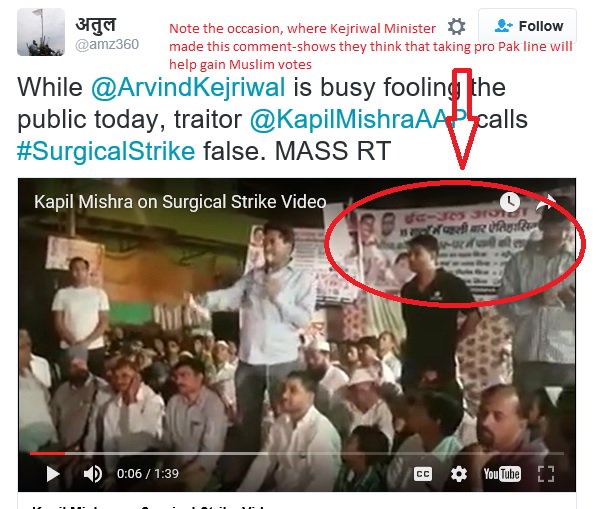 Mishra was addressing a public event in Sri Ram Colony, Sonia Vihar, North-East Delhi when he made this comment. The video of his comments was shared by Mishra himself on social media –

(A banner in the background reads ‘Eid Al-Adha festival…for the first time in 35 years, every house in Sri Ram colony has water..”)

“Those who used to hand out patriotism certificates to the entire nation, now we have asked them certain questions (likely reference to Arvind Kejriwal’s statement asking Government to release proof of surgical strikes) that they will think twice before giving out such certificates again.

Yesterday someone was telling me that TV channels are ready to show anything – I told him that they want to defeat Pakistan and give it a robust response on TV alone. I think there is no need to send our tank(er)s, just send news anchors (jibe at Arnab Goswami?)!

This is like someone making a grand noisy announcement over the birth of a child – bursting crackers, celebrations the whole night..the next day when someone asks ‘was it a boy or girl?’  they reply ‘how dare you ask a question, you have lowered the image of the entire nation’!

Well, if it was a crime to ask questions, why did you make so much hue and cry over it? If this issue (of surgical strikes) was supposed to be kept under wraps, you should have kept quiet. If you are making such loud claims throughout the world that we have done so much…then do tell us whether a girl or boy was born?”

Incidentally, the twitter trend #PakStandsWithKejriwal was trending at the top in Pakistan today, with many Pakistani citizens congratulating Kejriwal for questioning the validity of the Government of Bharat’s claims regarding the surgical strikes in PoK.

Incidentally, Kapil Mishra had called the PM an ‘ISI Agent‘ in the Delhi assembly last year – a comment endorsed by Kejriwal. Earlier this year, Kejriwal had released a video for all AAP party workers and volunteers in which he had claimed that ‘Modi can get me killed’.