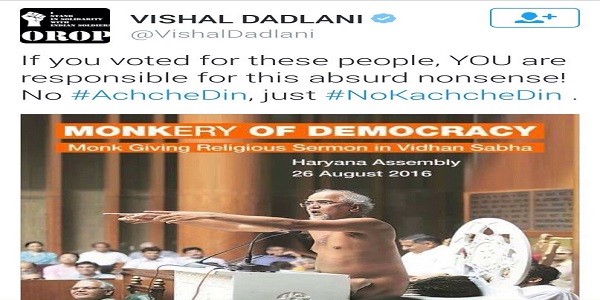 The recent address to Haryana legislative assembly by a Jain Digambara monk, Muni Tarun Sagar ji Maharaj, provided an opportunity for prominent AAP & Congress supporters to insult the Dharmic saint & mock BJP/Modi Government. If left to mainstream media, their comments would have gone largely unnoticed, but twitter was not going to let them off so easy.

This is what controversial music composer-singer and ardent AAP supporter Vishal Dadlani had tweeted: 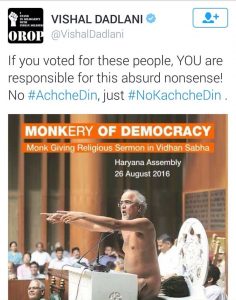 And this is what Tehseen Poonawala, husband of Robert Vadra’s cousin Monika, and a Page 3 chatterati often seen on TV representing the Congress viewpoint, had to say: These comments set off a storm of protests on twitter, which ultimately forced AAP supremo Arvind Kejriwal and the party’s senior Jain face Satyendra Jain, to apologize for Dadlani’s remarks and tweet in support of the Jain monk.

Tarun Sagar ji Maharaj is a very reverred saint, not just for jains but everyone. Those showing disrespect is unfortunate and shud stop

Facing flak from all sides, Dadlani deleted his offensive tweet, and tweeted – “It feel bad that I hurt my Jain friends & my friends @ArvindKejriwal & @SatyendraJain. I hereby quit all active political work/affiliation.”

It appears AAP has learnt well from Congress regarding the art of distancing themselves from controversial remarks by leaders/core workers – its another matter that the same sidelined workers often find re-entry through the backdoor once the issue has gone quiet. Of course, a pliable media helps in this subterfuge as top brass of ‘secular’ parties is never targeted by an outraged media the way a Modi is asked to answer for any and every remark by Hindu activists such as Sadhvi Prachi etc.

But people were not willing to buy Dadlani’s apology, and a a police complaint was filed against him –

Filed an online complaint with @delhipolice against Tehseen poonawala and Vishal Dadlani, will file an FIR also pic.twitter.com/gYTPtlr5ro

Some pointed out to Dadlani that Kejriwal himself has visited Tarun Sagar ji Maharaj, so he should think twice before disparaging a respected religious figure –

Hello @VishalDadlani ji, do you think @ArvindKejriwal ji was wearing a Kaccha when he went to meet Tarun ji? pic.twitter.com/6mkiQeCMuQ

Congress has still not tendered any apology for Poonawalla’s remarks, and neither has Poonawalla apologized. Twitter users pointed out to Tehseen Poonawala that the matriarch of the first family he worships, Indira Gandhi, had also once invited a Jain monk into Parliament

What explains thinly-veiled contempt for Dharma among Seculars?

Secularism in Bharat has come to mean a thinly-veiled contempt for Dharmic belief systems, especially Hindu Dharma, while Abrahamic faiths like Islam and Christianity are respected and hardly ever criticized. Christianity in fact gets lot of positive and celebratory coverage – just check for any news related to the Pope. When our seculars talk about minority rights, their focus is on Muslim-Christian rights with Jains, Sikhs, Buddhists, Parsis being of peripheral interest.

Poonawala’s comment reflects the more dangerous of the two mindsets – he is ok with a skimpily dressed woman being termed ‘slut’, but cannot understand how a naked man can be considered holy; Dadlani is outraged at the fact that a Dharmic leader was invited to deliver a talk in a legislative assembly.

The best response to Poonawala on why certain Dharmic monks don’t wear clothes came from twitterati @a_r_j_u_n who said – “One renounced body for service : other is using body to mint money : You are too dense to get this : I understand”.

It is also a reflection of the low IQ/hypocrisy of some self-declared liberals that they slam anyone who says women should dress modestly, while themselves showing a Victorian/Islamist moral streak in outraging over a nude Jain monk. The imitation of Western/Abrahamic mindsets is an unmistakable trait of secular liberals.

The likes of Dadlani claim that that they are against mixing religion with politics and with religious leaders addressing parliament. But these same people fall silent when pointed out that the Pope (head of the Catholic Church, who is also the head of state of Vatican City, a sovereign city-state entirely enclaved within the Italian capital city of Rome) regularly addresses the legislatures of Western democracies like UK and US and talks about the ‘role of religion in society’. The thinking of the secular-liberal cabal is best displayed by these two tweets of Shekhar Gupta, a controversial media person with a lot of influence in Lutyen’s Delhi –

Issue isn’t his stature or what he wears or doesn’t. Teachers/preachers of no faith shd be addressing legislatures https://t.co/tCdXW9GMK6 While this shows the hypocrisy of our secular-liberal gang, it does not mean that we should justify any practice based on what the West does – Pope addressing UK/US parliament should not decide whether Dharmic saints can address Bharat’s parliament. Dharma is not like organized religions such as Christianity; Dharma is ‘that which sustains’ – it defines our civilization, and can be thought of as a set of principles discovered over thousands of years by self-realized masters. Dharma should play a key role in our politics and our legislators should take inputs from Dharmic saints, but that does not imply blindly following any religious diktats or putting religious saints on a pedestal.

In the end, these two tweets sum up the distorted idea of secularism that prevails in Bharat today –

Vishal Dadlani was an Idiot & paid the price
He should learn from his boss @ArvindKejriwal who abuse only Hindus pic.twitter.com/qD0zJm6Eg8