“Afghans are going to have to decide their future, what they want, and the senseless violence, it has to stop, but it’s going to be very difficult,” the US President Joe Biden told the Afghan President Ashraf Ghani on Friday. He added: “But we’re going to stick with you, and we’re going to do our best to see to it you have the tools you need.”

Ghani knows that the promised help will be financial and humanitarian. From now on, Afghan security forces will have to fight alone against an emboldened Taliban insurgency, as prospects for a reconciliation deal between his government and the Taliban appear dim.

But keeping the brave face born out of Afghan pride, Ghani compared his position at this juncture to that of US President Abraham Lincoln in 1861, at the start of the war between the Northern states and the rebellious Southern states. “The Afghan nation is in (an) ‘1861 moment,’ like President Lincoln. Rallying to the defence of the republic, determined that the republic is defended. It’s a choice of values: the values of an exclusionary system or an inclusionary system,” he said, adding, “We will overcome all odds.”

But Ghani and his administration know well the steep uphill task that they are confronting.

In a brief media interaction, Ghani said that he warned President Biden that Washington’s move of withdrawing troops will have consequences for both sides, though he did not ask Biden to delay the withdrawal. 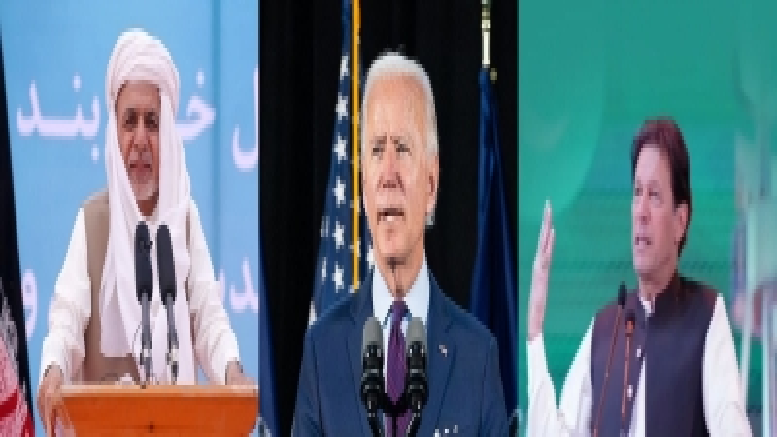 “The Afghan government needs to manage the consequences that will emerge after the US withdrawal and the Afghan people must rise to the challenge,” Ghani said.

According to the Afghan sources, President Ghani told Biden that “the Taliban are not fighting against us, but Pakistan is fighting in the guise of the Taliban.”

Biden pressed Ghani on the need for unity among the country’s leaders, urging them to stop fighting among themselves when the country is in crisis and government forces are at risk of losing control of the nation to the Taliban.

As the Americans are leaving, the Taliban are filling that vacuum. Violence has surged across Afghanistan and as September 11, the deadline for the departure of American troops, draws near, the Taliban are becoming increasingly emboldened. According to a new assessment of the US intelligence community, Ghani’s government could collapse within six months of the American military withdrawal from Afghanistan.

Three days ago, the Pakistani Foreign Minister, Shah Mahmood Qureshi had warned Afghan President Ghani and his team in clear terms that in their meeting with Biden and his team, they must not blame Islamabad.

Qureshi in fact, defended the Taliban and blamed the Daesh or the Islamic State in Iraq and Syria (ISIS) for the surge in Afghan violence.

“If you try and create this impression that the violence is high because of Taliban, again, that would be an exaggeration. Why do I say that? Aren’t there other elements over there who are playing the role of a spoiler?” These were Qureshi’s words aired last week during an interview with Afghanistan’s Tolo News network.

But in a recent interview with the New York Times, the Pakistani Prime Minister Imran Khan said Islamabad played a key role in convincing Taliban leaders to talk to the government in Kabul. “Really, it was [us] pushing them, pressurising them to talk to the Afghan government. So that’s how far Pakistan has got,” he said.

It’s interesting to note that President Biden has not spoken with the Pakistani PM Khan but he has invited Afghan President, Ashraf Ghani, to discuss Afghanistan and its future.

“They (Afghan Govt) can say whatever they want but the US knows Pakistan’s role very well in the peace process and the world is obvious to our role”, says Qureshi.