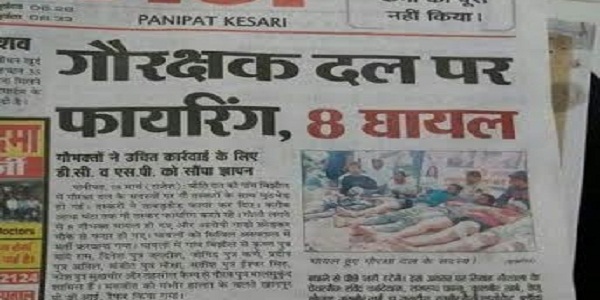 In a shocking incident that happened last month in Panipat district of Haryana, a jeep carrying a cow stuffed into it, fired 25 rounds at gau rakshaks (Gau Raksha Dal members) who were trying to stop the jeep, and eight gau rakshaks got injured. One of them was critical, and shifted to a bigger hospital. Local Hindi print media published the news but it hardly reached the English media and TV channels : 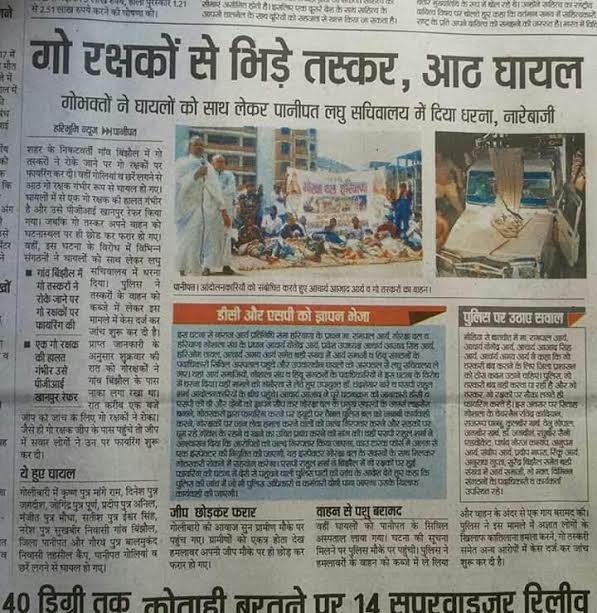 This incident happened in village Binjhol, Gau raksha Dal vounteers had received reliable intel that a jeep is carrying a cow stuffed into it on that route. When the gau rakshaks saw the jeep and tried to stop it to check it, the jeep driver and others started firing and kept on firing for 5 kms. Because of the firing, 8 gau rakshaks were injured.

Since the police and Cow Protection Task Force reached very late, Gau Raksha Dal and Arya Pratinidhi Sabha protested in front of Panipat Mini Secretariat and some injured Gau Rakshaks also joined in.  They have put forth their demands and grievances to the DC & SP.

The fact that illegal cow transporters and smugglers are increasingly found firing at police and gau rakshaks, proves that this crime looks like a very dangerous organized racket spread across Bharat and even abroad. Surprisingly, while cow vigilantism news is run in loops on English media and prime time debates are run on ‘gangs’ of gau rakshaks, the broad and deep investigation on cow smuggling has taken a back seat, which seems to generate huge amounts of black money since it is illegal in many states.

In another news of Nov 2015 in Thanesar, Haryana, the cow smugglers fired at police and then were encountered when police retaliated. Quoting the news report :

‘The deceased has been identified as Abid (27) of Yamunanagar and his injured accomplice is Ashraf (28), also of Yamunanagar, Kurukshetra Superintendent of Police (SP) Simardeep Singh said.

Police received information about cow smuggling taking place in the early hours. A police party reached Anaj Mandi and tried to stop the smugglers, who opened fire on them. The policemen retaliated in which Abid died while Ashraf was injured, he said.

The SP said police had registered some eight cases of cattle smuggling against the two in the past. In the firing by smugglers, a police vehicle was badly damaged, he said. Singh said two cows and as many bulls were found in the rear of the vehicle. One country-made revolver, four live cartridges and a mobile phone were recovered from near the body of the deceased.’

Why does no one weep for the policemen and gau rakshaks who shed their blood to uphold the law? No one condones violence, but why are we not trying to prevent this large-scale racket? If the smuggling by elements from (majorly one) community ceases, so too will isolated cases of vigilante violence.