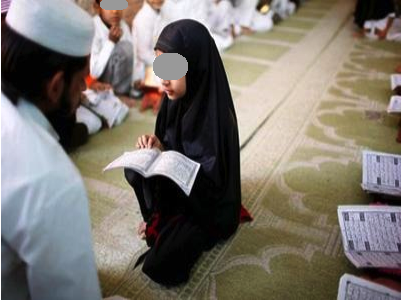 70-year-old maulvi Mohammed Zafir Alam was arrested for the brutal rape of a 9-year-old girl inside a madrassa in Delhi’s Narela area, as per a 1 March report in Navbharat Times.

The girl’s parents found out when the child complained of stomach pain and bleeding from her private parts. When questioned, she broke down and narrated her ordeal. She was quickly taken to a nearby private hospital from where she was referred to Ambedkar Hospital.

The accused Mohammed Zafir Alam (70), a native of Muzaffarpur in Bihar, resides along with his son in Bawana’s JJ (Jhuggi-Jhopadi) Colony, E-Block. There he had opened a madrassa where small children used to come to learn. The girl also resides in the same colony with her parents – her father is a factory-worker – and used to attend the madrassa.

Police sources told Navbharat Times that the girl child used to call the accused ‘dada’ (grandfather). Around 7 PM on 24 Feb, Saturday, the maulvi asked the girl to stay back after all the other students had left.

He closed the door of the madrassa and first gave her a Rs 5 coin. Then he intimidated the child and raped her. As she was leaving to go home, he again threatened to kill her if she told anyone. The scared girl didn’t tell her parents for two days, but two days later her health deteriorated and she started suffering intense pain. It was then that her parents noticed her bleeding and rushed her to a hospital where the doctor told them their daughter had been raped.

The police has lodged a case of rape and under POCSO Act based on the girl’s medical examination and testimony, and the accused was arrested on 27 Feb 2018.