Marxist violence continues unabated in Kerala. A 7 year old boy, son of a BJP affiliated couple, has been attacked with sharp weapons by CPI-M workers in the latest incident of barbaric violence unleashed on Hindu activists ever since the Kerala election results, where LDF (alliance of CPM and other Communist partis) emerged victorious but BJP has made a substantial vote share gain as well. 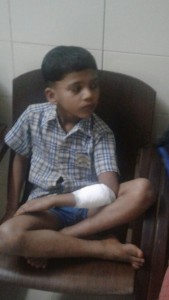 The 7 year old boy’s arm was wounded in the attack.

One can only wonder at the level of brainwashing Marxist comrades are exposed to, that they do not hesitate even at attacking minor children in their zeal to impose their fascist ideology. 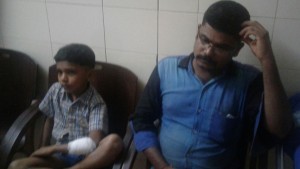 Hindu activists associated with RSS and BJP have been at the receiving end of several murderous attacks in the last few months, ever since the current election cycle began –

March 14, 2016: 26 Hindu activists from BJP were injured, 3 of them critically, after their peaceful protest march was attacked by CPM workers with stones &  iron rods at Trivandrum yesterday.

March 8, 2016: BJP party worker A V Biju (29), was taken to hospital in a critical condition after he was hacked by sharp objects by suspected CPM workers.

Feb 16, 2016: 27 year old PV Sujith, an RSS worker, was hacked to death by CPI-M (Communist Party of India – Marxist) workers in front of his parents in Papinisseri, Kannur district Kerala.