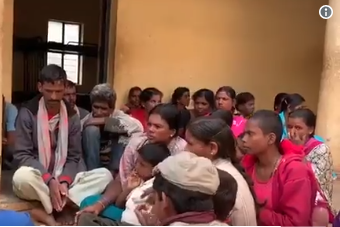 52 Dalit and tribal people, including 16 women and 4 children, were enslaved in a small shed in Karnataka’s Hassan district for almost three years. They were forced to work as bonded labourers for 19 hours a day without any pay. On protesting, they were beaten up with a horse whip and also abused sexually.

The police received information about the bonded labour ring from a man who reached out to them for help after escaped by scaling a 12-feet wall. Raids were conducted at a small shed at Hassan area of Karnataka on Sunday.

The victims were living in the heavily guarded shed for three years in inhuman conditions. The newest victims had been living there for a month. Two six-year-old boys are the youngest victims in the case while the oldest is a 62-year-old man named Ganesha.

An official said that the case was worryingly unique because it targeted migrant workers and used a distressed agrarian economy and pre-meditated system of bondage. The police fear that there might be many more similar cases in the area.

The accused have been identified as Munesha who was the main operator of the shed, Krishnegowda who was the owner of the land where the shed existed, Basavaraja, Pradeep and Nagaraja.

A senior official while talking about the working of the gang said that two auto drivers would target migrant workers from Karnataka, Telangana and Andhra Pradesh at railway stations by offering them a day’s work for Rs 600 or so. These migrants would later be captured and enslaved. Once they were at the shed, they were stripped off all their belongings- clothes, identity cards, phones and money. They were also threatened that their attempts to escape would lead to violence.

The labourers would get three meals a day as ‘payment’. The men would sometimes get local alcohol. Disobedience of orders meant empty stomachs and beatings with a horse whip.

An FIR has been registered under sections 323, 324 (wrongful confinement), 344 (theft), 356 (sexual harassment) of the Indian Penal Code (IPC) Bonded Labour System (Abolition Act) and the SC, ST (Prevention of Atrocities Act). Two people have also been arrested in the case.

It is an utter shame that such a brazen violation of human rights has taken place in so-called secular, liberal Bharat – that too in a state ruled by the ‘progressive, secular’ forces like JD-S & Congress.

It does not bear repeating that if such a case had occurred in a BJP-ruled state like Gujarat, this news would have become a topic of national debate and gone international by now. The blame would have been laid fair & square on the’Hindu’ BJP and the ‘cruel, exploitative’ religion of Hinduism.

But now, the political angle – that such a heinous crime occurred in the home district of ex-PM Deve Gowda who rules JD-S and whose son HD Kumaraswamy is currently the CM with support of the Congress – will be conveniently forgotten. But anti-Hindu elements will still use this incident as a convenient stick to further their agenda such as missionary conversion.

This incident should indeed make all of us hang our heads in shame, but with the correct realization that it is the outcome of a feudal society where sections of politically & socially powerful communities feel they can get away with anything. It has nothing to do with Hindu Dharma.

In fact, Hindu Dharma teaches us that every human carries the divine spark within, so we are all part of a shared universal consciousness. The only way to spiritual progress and eventual moksha is through good deeds & good thoughts. Nowhere does the varnashrama system (misinterpreted as ‘caste’) tell us to look down upon or demean any group of people or any occupation – it actually tells us that one’s innate traits and acquired ability determines ones varna and each varna has both rights and duties. Hindu Dharma teaches us to fight this kind of injustice seen in Hassan, not tolerate it.

The feudal system has survived even 70 years after independence precisely because those who have ruled us the longest (Congress and its clones) have followed failed statist, socialist policies; have stymied industrial development; have maligned wealth creation; have romanticised village life and ignored planned urbanisation.

These regressive feudalistic parties and organizations operate under the cover of two high-sounding ideologies – secularism and socialism. But their real agenda is what it always has been while they collaborated with foreign colonial rulers: loot & plunder. As Hindus, we should vow to root out such forces to build a truly just, prosperous & self-respecting nation.