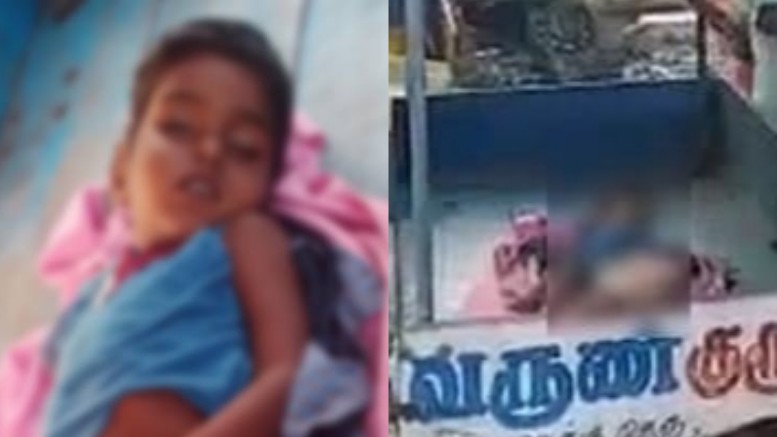 A five year old boy has reportedly died of starvation in Tamil Nadu. Police are trying to ascertain his identity and find the men who abandoned him in a push cart. The hunger death of the little boy in the “state of social justice” has shocked the public.

In the early morning of December 15, passer-bys noticed a child lying unconscious in a push cart on the Villupuram-Chennai national highway. The push cart is said to belong to a washerman who informed the police about the child. Police sent him to the government hospital where doctors confirmed through autopsy that the child was dead.

Autopsy revealed that there were no external wounds and that the child died of natural causes. However, as there was no trace of food in his intestines, doctors reported that the child doesn’t seem to have eaten for 2 days and that it could be either due to dehydration or a starvation death. The child was wearing a government school uniform but could not be identified.

Later through police investigation and CCTV footage it was revealed that two men brought the child and left him in the push cart. As the men could not be identified, police continued to search for clues in CCTV footage. At first there were speculations that the child could have been murdered or sacrificed as one of the footages showed the two men going inside a temple with a conscious child but leaving with an unconscious one.

But the recent ones revealed that the men were in fact tearful as they laid the child in the cart and walked 2 kms to board a bus. Except for the Talisman the child wore no clues could be found about either the child or the men who brought him. Villupuram police sent the CCTV footage to other district police WhatsApp groups to identify them in case they came from neighboring districts. Reportedly they received information from the public of the neighboring Kallakurichi district that lookalikes of the two men were spotted in their area and are in search of them.

Dravidianists often mock states like UP and Bihar as “cow belt” from where “paan chewers” come to sell “pani puri” in a well developed Tamil Nadu. It is an undeniable fact that TN is indeed developed in many aspects. But it comes as a shock that a small child cannot even satiate his hunger in a developed state and died of starvation.