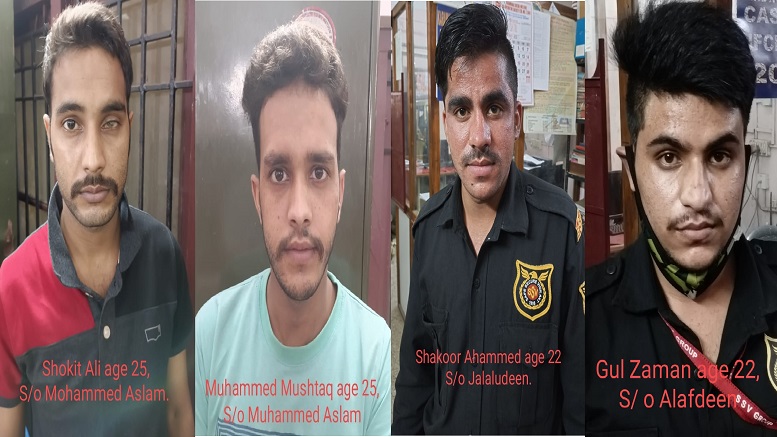 5 Muslim youth from the union territory of J&K in their early 20s with double-barrel shotguns slung on their shoulders are suspected of surveying Kerala’s capital Thiruvanthapuram for the past 6 months. They allegedly integrated into the urban landscape as security agents moving cash and filled ATMs all over strategically important parts of the capital city, unhindered. They did not have proper licences for the weapons.

Shoukat Ali, Shukur Ahamed, Gulzaman, Mushtaq Hussain and Mohammed Javed, all natives and neighbours from the Rajouri district in Jammu region were carrying fake gun licences. Central intelligence agencies tipped off Kerala Police following which they were arrested from their residence at Karamana. 5 guns and 25 rounds of ammunition have been seized.

All 5 were ‘recruited’ by a Mumbai based ‘security agency’. The men admitted that the Mumbai agent procured fake weapons licences and arms and sent them to Kerala.

Since those arrested are suspected of spying on vantage points of the city, Central Intelligence agencies are handling investigations. Sleuths contacted the Rajouri district collector for further information. The Mumbai recruiters too are under surveillance. Who helped them in Kerala is also being probed.

This incident came to light in the backdrop of intelligence reports that Islamists from Sri Lanka had landed on the coasts of Kerala. It is also suspected that many ISIS terrorists including Malayali Nimisha Fathima who were freed from Afghanistan jails by the Taliban are trying/ have reached Kerala. They are among the lakhs of ‘refugees’ that entered Pakistan from Afghanistan. and the Kerala ones are suspected to have chosen the sea route.

Kerala is brimming with discontent and there is resentment amongst Hindus at the way in which the 1921 Moplah genocide is being whitewashed by both Islamists and communists alike. Unlike back then, Hindus now know exactly what to expect.