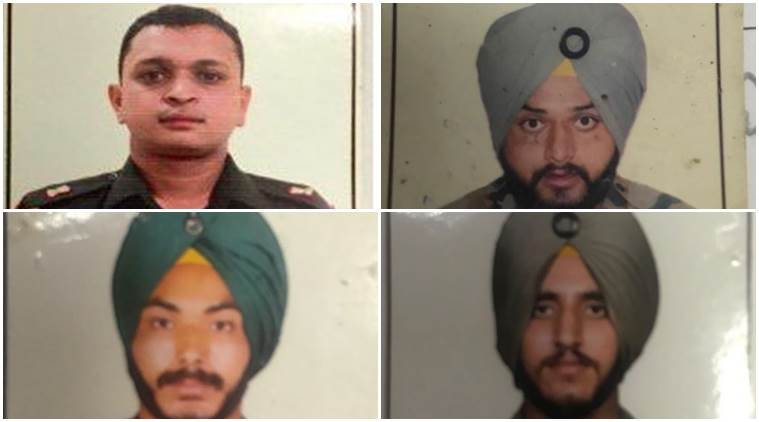 An army officer and three jawans lost their lives in ceasefire violation by Pakistan in Keri (120 Infantry Brigade) Batallion Area of Rajouri district, J&K along the Line of Control (LoC).

According to a report on india.com –

“The firing started on Saturday evening. According to a report, Pakistan Army resorted to indiscriminate firing on the Indian posts without any provocations, violating the ceasefire agreement.

Two other personnel also sustained injuries and are under medical treatment.

#ArmyCdrNC and all ranks salute the supreme sacrifice of our brave officer and soldiers & offer deepest condolences to the families @adgpi @PIB_India @SpokespersonMoD pic.twitter.com/k3wggXKcN6

On October 31, Pakistani troops violated the ceasefire by firing from small arms along the LoC in Karmara belt of Jammu and Kashmir’s Poonch district, resulting in injuries to a girl.

There was another incident on October 26, when Pakistani troops fired at Sher Shakti and Mandhar areas of Kerni sector. No casualty was reported in the firing. On October 18, eight civilians, including a two-year-old child, were injured in heavy Pakistani shelling.

Pakistan has violated the ceasefire a total of 881 times along the Line of Control (LoC) and the International Border (IB) in Jammu and Kashmir this year resulting in the killing of 30 people.

“Sources said the four soldiers were part of an Army patrol in Chingus area of Keri sector. Around 12.15 pm, Pakistani troops suddenly opened fire at them from across the border, sources said.

Sources attributed the ceasefire violation to a growing desperation on the Pakistan side to push in armed terrorists into India before closure of the mountain passes this winter. The security forces and the police have killed over 200 militants, including many top commanders, this year.”

This ‘talks at all costs’ lobby has a firm grip on our foreign policy establishment, so much so that even the current NDA Government, which had come to power vowing a tough stance against Pak-sponsored terror, has only been able to maintain an indefinite moratorium on high-level talks with Pakistan – despite last year’s surgical strikes on terror camps in PoK following the barbaric Uri terror attack, other aspects of our relation with Pakistan continue as before – it still enjoys Most Favored Nation (MFN) status for trade, full diplomatic presence etc.

The Pak-loving lobby influences popular culture too, with Bollywood being an important vehicle for seeding this self-defeating idea in people’s minds. The just released Bollywood potboiler ‘Tiger Zinda hai’ starring Salman Khan (as a RAW agent) and Katrina Kaif (as an ISI agent) talks about how insaniyat (humanity) is greater than India-Pakistan dushmani (enemity) and where the ISI agent says that “we have to show the world that we stand for peace”. Yes, ISI – the rogue Pakistani spy agency which master-minded the 26/11 attacks on Mumbai and is at the heart of the ‘death with a 1000 cuts’ jihadi policy used by Pakistan against Bharat since 1980s – is shown as an ambassador of peace.

We would like to reiterate excerpts of an interview we had done some time back with noted socio-political commentator and Kashmiri Pandit activist Sushil Pandit, who is an expert on Indo-Pak relations –

“All governments, without exception, have treated Pakistan as a any other normal State is dealt with. The same sterile methods, that have proved useless time and again, have been repeatedly deployed. No wonder the results too are identical – zilch. Waiving off the red lines, drawn with great show of resolve, have been bandied about as wisdom. Coughing up concessions in the wake of grave transgressions, have been elevated to the level of grand strategy. Pakistan has figured us out, thoroughly, as a clueless bumbling nation that can be bled and humiliated, at will.

An awfully large, and well heeled, section of our society have a Paki-obsession. They are almost everywhere – in our media, academia, diplomacy, bureaucracy, politics, think-tanks and noisy chatterrati. Pakistan uses them to influence the public discourse, and through that the policy establishment, in Bharat. Through their interventions, these Pakophiles, spread confusion and undermine Bharat’s ability to take tough decisions, to defend itself effectively, resolutely.

Pakistan understands and respects only power. Persuasion does not work with Pakistan. If you cough-up concessions to buy freedom for Kulbhushan Jadhav, you can rest assured that Pakistan would come for more in future. The only way to respond is to impose a stiff cost on Pakistan. Such a cost that it will find it too painful to bear.”