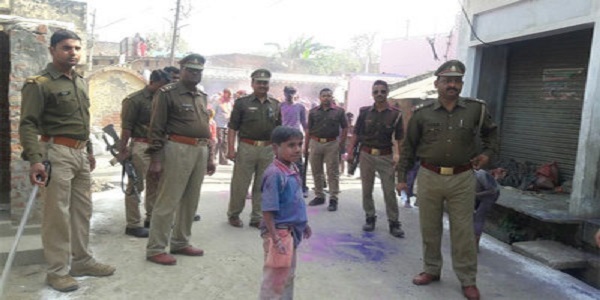 One of the oft-repeated assertions of our psuedo-seculars is the existence of a ‘composite culture’ which they term ‘Ganga-Jamuni tehzeeb’. We are told by leftist historians that this culture took birth in the plains of North India (or the Doab region of Ganges and Yamuna rivers) before spreading across the country, and it is the cornerstone of our civilizational legacy.

Unfortunately, neither our past nor our present bear testimony to this idea of a composite culture, when we look at the interaction between Abrahamic religions (Islam, Christianity) and the Dharmic faiths. Yes, there might have been the odd Muslim ruler who was kind to his Hindu subjects, or some periods of time in specific regions when communal peace reigned, but the exclusivist fundamentals of the Abrahamic faiths ensure that the kernel of intolerance is always present and can take root anytime.

This deep-rooted intolerance towards the religious and cultural practises of the ‘kafir’ Hindus was again on display during this year’s Holi celebration in North Bharat, albeit there was a record dip in clashes during Holi this year due to the pro-active, firm governance of CM Yogi Adityanath .

12 Hindus were injured in stone-pelting by a Muslim mob on a Holi procession in Gonda, UP. Apparently, they took offence after Hindu children threw some color on Muslim youth walking by. Instead of embracing the festival of colors as followers of Ganga-Jamuni tehzeeb, or even exhibiting ‘tolerance’ by ignoring the children’s over-exuberance, local Muslims gathered at their mosque and decided a violent riposte was the need of the hour to show the ‘kafirs’ who is boss. Injured included Rambaran, Dharamraj, Pawan Kumar and 9 others. Police swung into action once news about the attack spread through the village and Hindus started to gather. 12 people have been taken into custody in the case. – NavBharatTimes

In a similar incident, two kids and a rickshaw-puller were brutally thrashed for playing Holi in Sitapur, UP by people coming out of a  mosque. The trigger was some color accidentally falling on a Muslim man on his way to the mosque while some kids were playing holi on the streets. The man claimed the color was thrown deliberately. When the news reached the mosque, people came out and avenged the ‘hurt sentiment’ by thrashing two brothers Dharmendra and JItendra and a rickshaw puller. Soon Hindus also gathered and started counter stone-pelting. Police arrived with a force of several police stations and PAC to take control of the situation. A report against 40 people has been registered in the case. – amarujala

A rally of colors turned into a communal clash in Bijnor, UP after a child joyously threw some color on a Muslim man. This triggered stone pelting from Muslim rooftops, and police rushed to defuse the situation. Hindus protested, demanding arrest of the stone pelters, before they would proceed with their rally. When police started forcing the rally to proceed, the mob got violent and police resorted to lathi charge and tear gas. People from both communities have been arrested. – jagran.com

A communal clash erupted in Kharika village near Ranchi, Jharkhand after members of Muslim community stopped a Holi procession from passing through their colony and started stone pelting on the procession. Half a dozen people got injured in the stone-pelting. Police has arrested 13 people in the case for disrupting communal harmony in the region. Heavy police has been deployed to maintain peace in the region. – bhaskar.com

This tweet sums up the true picture of how those Muslims who try to practise ‘Ganga-Jamuni tehzeeb’ are quickly brought back to the ‘true’ path by the purists.

(Credits to @DivyaSoti for tracking these attacks)