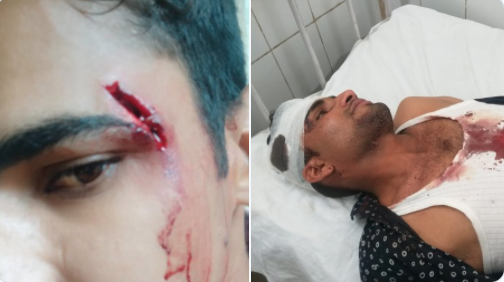 Five policemen on patrolling duty to enforce Covid19 lockdown were attacked on Friday morning by a 100-strong Muslim mob in Tonk, Rajasthan. Three of them received serious head wounds.

Police was attacked with swords, rods, sticks and stones. The injured policemen were rushed to a government hospital and additional police force was sent to the spot to bring the situation under control using ‘mild force’. Two of the cops were discharged while three are still undergoing treatment for critical injuries. The incident took place in Kasai Mohalla (butcher’s colony) of Panch Batti area under Kotwali police station limits.

“The injured cops were patrolling in the morning. Around 8am, when they saw some people were roaming unnecessarily in the curfew hit area and when these cops asked them to stay inside their homes, the accused started beating them,” Vipin Sharma, Tonk’s additional superintendent of police, said.

The critically injured constables who received head wounds were identified as Rajendra, Rajaram, Bhagchand, while Rajesh and Asharam were discharged after first aid.

“I don’t know if this was pre-planned, but the mob appeared suddenly and surrounded the 5 of us and started attacking us with lathis, stones, weapons, iron rods. Almost all of them were armed,” said constable Rajendra. Tonk city has 47% Muslim population and one of the higher crime rates in the state.

Station house officer (SHO) of Tonk’s Kotwali police station Bansi Lal said seven people have been detained so far and a case has been registered. Further investigation is on.

Aaj Tak informs that there has been an earlier attack on ASHA & health workers in the same Kasai Mohalla area of Tonk. Tonk has emerged as on the Corona hotspots in Rajasthan with 92 cases thus far, 22 in just the last 1 day. Bamor gate area of the city has turned into the epicentre with 43 cases, reports Dainik Bhaskar. The super-spreader is a youth who attended the Tablighi Jamaat event in New Delhi but hid his travel history and kept roaming with friends and family.

This attack comes just 2 days after a brutal assault on health workers and police in Haji Neb Masjid area of Moradabad, UP on Wednesday, when they went to pick up a coronavirus patient and his family for institutional quarantine. A mob quickly gathered and illegally confined a doctor and seriously injured a technician. So ferocious was the assault that 4 policemen who had accompanied the medical team were forced to retreat. 17 accused, including 7 women, have been arrested for that assault and they are being charged with the stringent NSA law.