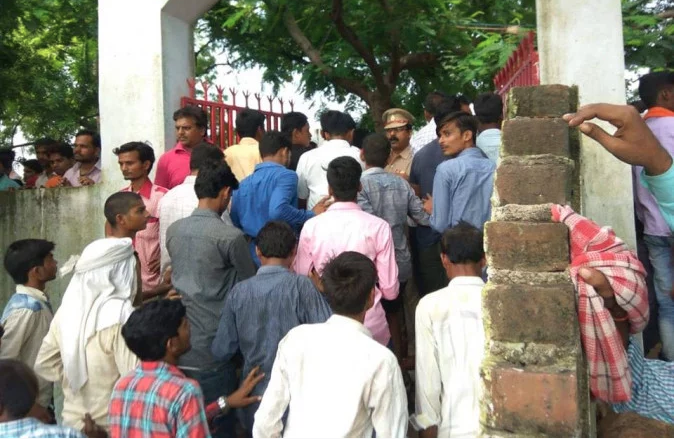 After an elderly sadhu and a temple priest were murdered on Sunday night in Aligarh district, 2 more sadhus were brutally stabbed to death and another injured inside a temple premises on Wednesday in the Bidhuna area of Auraiya district of Uttar Pradesh.

The murdered sadhus were brutally tortured and their bodies mutilated, going by Hindi daily Amar Ujala’s report – their tongues were cut out and they were beheaded. The 3 sadhus used to oppose cow slaughter in the area, and it is believed that this led to the attack on them. Upset locals vented their ire on police and demanded that the UP CM Yogi Adityanath visit the scene of crime before the bodies are cremated.

“Additional DG (Kanpur range) Avinash Chandra said the priests were found lying in a pool of blood with multiple stab wounds on their necks and other body parts inside the Bhayanak Nath temple in Kudarkot area under Bidhuna police station.

“They (sadhus) were tied to a charpoy and attacked. Two of them were killed,” Circle Officer, Bidhuna, Bhaskar Verma said.

Infuriated at the killings, a mob attacked shops and set some of them afire and hurled stones and brickbats, prompting police to open fire in the air, an official said, adding the situation was soon brought under control with heavy deployment of police to prevent any untoward incident

The deceased were identified as Lajja Ram (65) and Halke Ram (53), residents of Bakewar, Etawah. Another monk, Ramsharan (56), received serious injuries, police said. A resident of Bidhuna, he was shifted to Saifai hospital, they said.

The three were rushed to the district hospital where Lajja Ram and Halke Ram were declared dead upon arrival, while Ramsharan was shifted to Saifai hospital in a critical condition, ADG Chandra told PTI.

Inspector General of Police (Kanpur range), Alok Singh, rushed to Auraiyya to supervise police action and to maintain law and order. “People were generally complaining that the area where the murders took place was witnessing cases of cow slaughter and the victims were opposing it. That could be a possible motive behind the attack,” the IG said, adding, Station House Officer, Akhilesh Mishra, was placed under suspension on charges of negligence.

Around a dozen police teams headed by senior officials were formed to investigate the double-murder. Taking note of the incident, Chief Minister Yogi Adityanath directed top officials including the Principal Secretary (Home) and the state DGP to ensure the case was worked out within 48 hours and strict action was taken against the culprits.”

With these murders, 4 sadhus/temple priests have been killed in Uttar Pradesh in a span of just 2 days. On Sunday night, Mahant Kalidas and a priest Sonpal were lynched to death with sticks and bricks in a Shiv temple/ashram in Aligarh where the two had lived and served for the last 20-25 years.

Many on social media have called out the hypocritical silence of the English-language MSM on this issue – our MSM disguises rampant cow trafficking across Bharat as a legitimate livelihood and creates a misleading victimhood narrative whenever a cow smuggler is ‘lynched’ by irate villagers. But when the deadly beef smuggling mafia claims yet more victims in the form of these elderly sadhus, MSM either ignores or downplays the incident.