Ayesha Renna is a radicalized student from Kerala who likes to presents herself as a social activist, and who has condemned the hanging of terrorists Afzal Guru & Yakub Memon. She and her “Shero” friend Ladeeda Farzana (Sakhaloon) are associated with Fraternity Youth Movement, a youth organisation of Welfare Party of India (WPI), a political wing of the  Islamist outfit Jamaat-e-Islami-Hind (JeI). WPI is headed by S.Q.R. Ilyas, ex-chief of banned terror outfit SIMI (Students Islamic Movement of India) and father of controversial JNU-sedition row accused Umar Khalid.

These days, Ayesha Renna is busy protesting the arrest of separatist, terrorist-in-the making, Sharjeel Imam. Sharjeel is a JNU student, a radicalized Muslim who has provoked his co-religionists to disconnect North-East from mainland Bharat by taking over the ‘chicken’s neck’. Further, this radicalized Islamist, who idolizes Jinnah, has accepted during police interrogation that he envisions Bharat as an Islamic state.

Both Ayesha Renna and Ladeeda Farzana have clearly denounced secularism hailing Islam as the only ideology they are fighting for. They have been at the forefront of Jamia Milia Islamia’s protests against the CAA and NRC.

Hence, the agenda of the manufactured Muslim “heroes” and “Sheroes” is clear: They are all working towards an Islamic Bharat, where the Swastika will be razed to the ground, Goddess Kali will be wrapped in a hijab, and bindi-sporting Hindu women will be made to wear the burqa.

But Bollywood’s famous intellectually gifted Akhtar family has an interesting role to play in this drama directed with the aim of Islamic Bharat in mind. That Farhan Akhtar staged a protest at Gateway of Bharat and started to stutter when reporters quizzed him on the CAA is no secret. His own words presented him as more ignorant than what an average college dropout like him generally is. But his unawareness doesn’t keep him from drumming up the propaganda his entire family is pedalling.

While the father, son, and step-mother had already exposed themselves as “civilized” Hindu-haters hiding under the burkha of secularism, daughter Zoya Akhtar joined the party late only to take the insanity up a notch  and extend her support for a terrorist-sympathizing Ayesha Renna who is demanding the release of Sharjeel Imam, an open advocate of dismemberment of Bharat. It will be a great mistake on our part if we dismiss the behavior of this brother-sister duo as their ignorance. No, they are not ignorant about the CAA-NRC, nor is there any misunderstanding clouding their minds. They know everything about the CAA very well, and that is at the core of their fear.

Be it Farhan, Javed or Zoya Akhtar, or the step mother Shabana Azmi, or the thousands others who are holding this country to ransom over the CAA – they all know very well that the CAA will never deprive them of their citizenship. But, they also know that implementation of the CAA, and the proposed introduction of the NRC at a later stage, will be a serious blow to the innate religious & cultural supremacy they presume to have over this nation’s majority.

For those in their ranks who are thoroughly radicalised, CAA and NRC hurt their dreams of eliminating the saffron band from the tricolor. Their dream of unfurling a green flag with the crescent moon and a star at the Red Fort will stay unrealized if the CAA and NCR become reality.

Recently, an anti-CAA rally in Hyderabad held up a distorted version of the Bharatiya tri-color. It had the Ashoka Chakra replaced with the Islamic Shahada ‘la ilaha illallah’, which translates to “there’s no god but Allah”. The protestors at Shaheen Bagh put out posters of an Indian woman wearing the national flag as hijab. Strikingly, the flag was shown upside down, with green at the top and Saffron at the bottom. This is the main agenda of the anti-CAA/NRC protesters and all the celebrities who are supporting them. 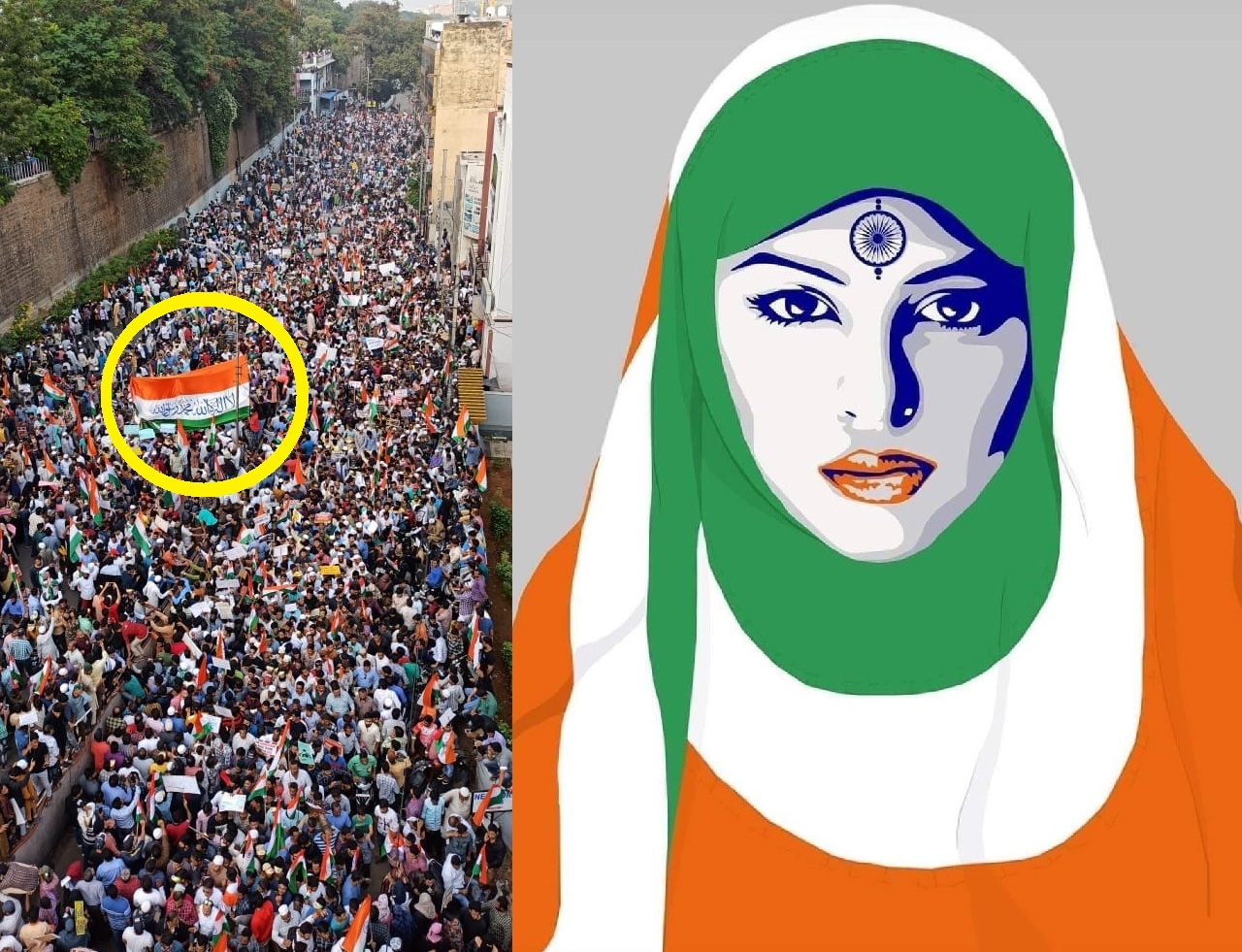 Make no mistake, they are not fighting to save the constitution or democracy. The radicals leading this movement, ably supported by their apologists and ‘useful idiots’, are fighting to establish the Islamic caliphate, they are fighting for Ghazwa-e-Hind, or for the Muslim Nizam they hope will defeat the democracy of Bharat and add another Islamic country to the world map.

After her father and brother, Zoya Akhtar, by supporting Ayesha Renna, has declared that she is just as much of an Islamic fundamentalist as Sharjeel Imam who is in the custody of Delhi police. However, we are left wondering what could be Shweta Bachchan Nanda’s interest in all this conundrum.