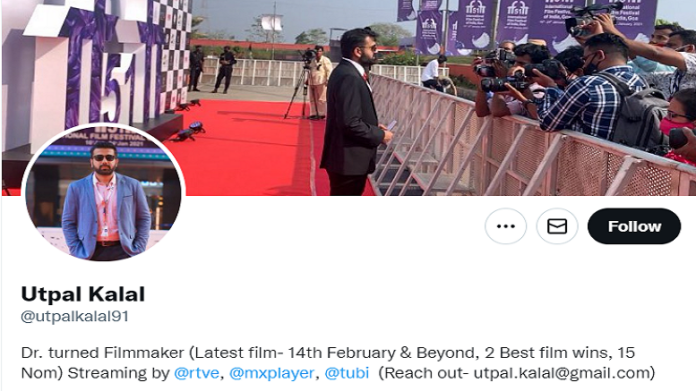 I am not surprised to see this anti-Bharat drama at the IFFI Goa which happens to b a prestigious film festival of Asia, fully funded by GOI. It’s a well planned hit on Vivek Agnihotri and film The Kashmir Files.

Dear Anurag Thakur sir, what we witnessed at IFFI from this Israli filmmaker Nadav Lapid under your nose is something we won’t be able to forget. This situation is a true testimony on what’s being said in The Kashmir Files, ‘Sarkar bhale hi inki hai, system humara hai.’

Anurag ji, the Directorate of Film Festivals, India is flawed, so is your Films Division. I remember 2020 MIFF, my documentary film ‘The 14th February & Beyond’ was in national competition. At the award ceremony we didn’t win anything which is fine, but it got me wonder, despite a houseful, we get nothing and other woke filmmakers who were bashing Modi and Bharat all year on twitter get to win cash prizes.

So after the event we were on dinner and I bumped into National Jury head of MIFF 2020, Thomas Waugh. I introduced myself, ‘Hello sir, I’m the director of The 14th February & Beyond.’ He looked at me top to bottom and said, I didn’t think such a young filmmaker of this movie. He took a pause and said; it doesn’t matter how good your film is but I have a problem with your film.

I said, please tell me sir, so we can made better film next time. He said, you bringing BJP minister in your film, bringing republican party senator in it and showing all bias news channels. Your film is a propaganda and I made sure it doesn’t win. Make better films next time..

I had tears in my eyes. I was actually not sure what to feel? Where to go? A person holding costly food plate sponsored by GOI staying in five star during festival has audacity to speak like this. I knew the system was broken.

So what happened with The Kashmir File, has been happening with pro Bharat films since long, if GOI doesn’t clean the system, it will keep on happening becaause the Left certainly knows its game. They got their people in system.

(This article has been compiled from the tweet thread originally tweeted by Utpal Kalal @utpalkalal91 on November 29, 2022)

We request everyone to watch Utpal ji’s documentary and help break the chokehold on Bharatiya discourse and media which neo-colonial forces still continue to exercise, with the aid of deracinated elites and our colonial-minded bureaucratic state apparatus.

You can watch this must-watch documentary “The 14th February & Beyond” online here.