16 years after its release, director Farah Khan revealed that she made a conscious effort to not give the villain in her movie Main Hoon Na a Muslim name, for that would bring a bad name to her community. But her treachery doesn’t stop just at that. The villain in her debut movie was called ‘Raghavan’. For those who don’t know, Raghavan is another name for Bhagwan Ram.

The director & choreographer, who received unbounded love from Bharat for decades, showed Pakistan in a positive light in her movie, with the real villain being an ex-Indian Army officer Raghavan (named after Bhagwan Ram) who tries to worsen the relationship between Bharat and Pakistan by trying to derail a peaceful exchange of prisoners – remember, this movie released in 2004, just 2 years after the Pakistan-sponsored terror attack on Bharat’s Parliament in 2001 and the 2002 Kaluchak massacre in J&K by Pakistani terrorists.

And to do a little damage control and fool Hindus some more, she named the hero as Major Ram Sharma and his asinine brother Lakshman. The Hindus cheered the secularism, the twisted design of the debutante director was lost on them. The movie was a box office hit.

Let’s look at another Bollywood offering, bursting with Pakistan love. In Bajrangi Bhaijaan directed by Kabir Khan (a director who, we are told, can stand poor acting & poor screenplay but not ‘bad politics’), the child’s Muslim mother in Pakistan is projected as an affectionate and courteous mother, the Brahmin family in Bharat who gives shelter to the girl is casteist and bigoted. That is the golden thumb rule for ‘seculars’ in Bollywood: Muslim good, Hindu bad.

The idea of featuring a thrifty exploitative ‘lala’ (baniya), cunning Brahmin contrasted against a dildar (large-hearted) Pathan or an elderly well-meaning Abdul chacha who wishes he had another child to sacrifice for the motherland is not new. It dates back to the some classic Bollywood blockbusters.

Vijay of Deewar movie was an atheist. One who never stepped inside a temple. But this very atheist flaunts billa number 786 (considered sacred in Islam) with élan and is saved by it multiple times. Sincere gratitude to writers Salim-Javed for coming up with this concealed propaganda that no Hindu could decipher in over 4 decades. 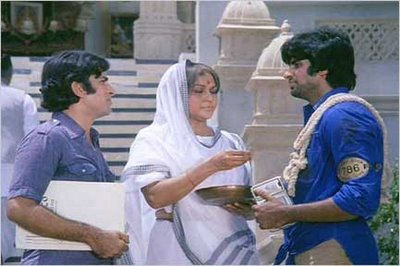 For decades, the Khans and Akhtars and Shahs of Bollywood have been tricking gullible Hindus. And Hindus, least bothered about the damage done to their culture, traditions and faith, continue to make them stars, filling up their bank accounts. Aamir Khan meets the Islamist Turkish President in 2017 and Javed Akhtar abuses the elected Prime Minister of Bharat whenever he gets and opportunity. The one to have plummeted to the lowest level is Naseeruddin Shah who is going around everywhere from street protests to foreign media outlets spreading lies about the CAA and instigating ordinary Muslims to rise and ‘snatch their rights’.

There was a recent uproar about the movie Shikara by Vidhu Vinod Chopra that, on the pretext of telling the untold story of Kashmiri Pandits’ plight, showcased a warped narration presenting the ethnic cleansing of Kashmiri Hindus as ‘a little fallout between friends’ and which even painted Hindus as ‘radicals’ through scenes like Kashmiri Hindu boys living in a refugee camp saying ‘Mandir wahin banayenge’.

Chopra is no stranger to twisting facts, yet it is Hindus who made his films block-busters. Why Sanjay Dutt was thrown behind bars and what his role was in the 1993 Mumbai serial bomb blasts is public knowledge. But in Sanju, producer Vidhu Vinod Chopra and director Rajkumar Hirani did their best to whitewash Sanjay Dutt’s crimes and present him just as innocent as the ‘poor headmaster’s son’ in a Barkha Dutt narrative about terrorist Burhan Wani.

The Chopra-Hirani duo also have us the Aamir Khan starrer PK. The main idea introduced by PK was: visiting Hindu temples and worshipping Hindu Gods is a farce. Another idea promoted in PK was: Hindu girls in love with Pakistani Muslim men are held back from marriage by the girl’s rigid parents. (have you ever seen these Bollywood seculars promoting the idea of a Muslim girl marrying a Hindu man? Think on that for a minute.)

Aamir Khan, who thinks Bharat is an intolerant country, had a blast chasing a man in the get up of Bhagwan Shiva in PK. His wife, who doubts the safety of her children in Bharat, should know what happens to those who insult the prophet of Islam in Pakistan. Aamir Khan wants to preach atheism or monotheism to his audience, sticks stickers of Hanuman and Krishna on his face in a movie, and then goes on Muslim pilgrimage of Haj. That’s a beautiful atheism we are seeing there.

Bollywood has been subtly maligning Hindu society, portraying Brahmins and Baniyas as evil beings, for decades now as this IIM-A professor’s research has revealed.

Majorly controlled by a left-liberal-Islamist cabal, in a country with a Hindu majority, Bollywood is pushing the cause of soft Islamization by promoting atheism only in Hindus through characters like Deewar‘s Vijay and PK, while promoting religiosity among Muslims. What makes all this all the more saddening is that the ‘secular’ Hindu is still blind to this game.