When WHO advised against drinking camel urine to contain MERS coronavirus 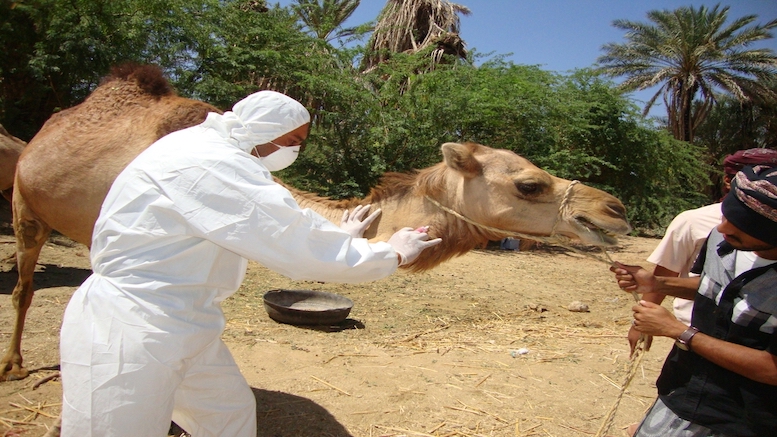 Coronaviruses (CoV) are a large family of viruses that have previously caused epidemics/pandemics similar to what we are presently witnessing with the Wuhan Coronavirus (COVID19). 2012 had seen the outbreak of Middle East Respiratory Syndrome (MERS-CoV) while in 2002 the world had witnessed an outbreak of Severe Acute Respiratory Syndrome (SARS-CoV).

Coronaviruses are zoonotic, meaning they are transmitted between animals and people.  Detailed investigations found that SARS-CoV was transmitted from civet cats to humans and MERS-CoV from dromedary (one-humped) camels to humans. COVID19 is suspected to have jumped from bat to a wild animal (most likely pangolin) sold live in the Wuhan wet meat market, from where it jumped to humans.

Camel urine – the ‘magic cure’ of the Middle East

As per WHO (World Health Organisation), approximately 80% of MERS cases were reported by Saudi Arabia. People got infected through unprotected contact with infected dromedary camels or infected people. Apart from practising general hygiene measures like regular hand washing, WHO had recommended some specific precautions to avoid catching MERA:

While the recommendation to not drink camel urine might surprise some, camel urine has been used in the Arabian Peninsula for medicinal and religious purposes for centuries, being a part of Islamic prophetic medicine. As per the hadith of Sahih Bukhari 8:82:794

“Some people from the tribe of `Ukl came to the Prophet and embraced Islam. The climate of Medina did not suit them, so the Prophet ordered them to go to the (herd of milch) camels of charity and to drink, their milk and urine (as a medicine). They did so, and after they had recovered from their ailment (became healthy) they turned renegades (reverted from Islam) and killed the shepherd of the camels and took the camels away. The Prophet sent (some people) in their pursuit and so they were (caught and) brought, and the Prophets ordered that their hands and legs should be cut off and that their eyes should be branded with heated pieces of iron, and that their cut hands and legs should not be cauterized, till they die.”

As per reports, camel urine is also used as a shampoo, or remedy for hair loss, and it’s even occasionally prescribed by some doctors. Urine from virgin female camels is highly prized. In February 2013, a team from King Abdulaziz University in Jeddah, Saudi Arabia, claimed they had extracted a substance from camel urine that could be used to treat cancer. In 2009 the same researchers claimed they’d seen evidence that camel milk and urine could fight eczema and psoriasis. Other scientists and doctors in the region have contested these findings and denounced the practice of drinking camel urine.

Captive breeding of wildlife for commercial purposes is allowed in China – the exotic meat is eaten by a section of Chinese, including some super-rich elites. According to a Chinese political economist, Chinese people’s love for eating wildlife had deep cultural, economic and political roots.

“Chinese people view food as their primary need because starving is a big threat and an unforgettable part of the national memory. While feeding themselves is not a problem to many Chinese nowadays, eating novel food or meat, organs or parts from rare animals or plants has become a measure of identity to some people.”

Chinese buyers seeking sex boosters, cures for cancer and other diseases also pose a threat to wildlife, including endangered species like tiger and rhinos, across the world and especially in East Asia. Traditional Chinese medicine includes the use of around 1,500 animals. The Chinese, especially those in the country’s southern regions, are traditionally inclined to “ye wei” – “wild taste” –  the belief that exotic wildlife fare endows them with added social status and the traits of the animal consumed, such as bravery, long life or sexual prowess.

The entire world is paying a heavy price for this Chinese obsession with exotic wildlife fare – as it has been the direct cause of at least 2 major epidemic outbreaks – SARS and COVID19  – in recent years.

The coverage of the above-mentioned questionable social practises is muted and restrained in the mainstream global press, despite the outbreak of catastrophic global pandemics directly related to these practises; entire Middle East and China have not been branded ‘uncivilized’. In fact, ace Hindu-baiter BBC even went one step ahead with an article titled “Camels could help cure humans” which was published right after 9/11.

Bharat’s mainstream media anyway believes in exclusively mocking and denigrating Hindu beliefs and practises, so articles critical of other cultures are rare to see.

But even in the midst of the  COVID19 pandemic, global Western media & liberal Indian outlets found enough time to indulge in some good old Hindu bashing. They decided to play up the news of a fringe Hindu outfit advocating the use of cow urine to fight the Coronavirus. The All India Hindu Mahasabha is a pale shadow of its former self – split into multiple factions managed by publicity-hungry individuals, no one in Bharat takes them seriously. Yet, all major media outlets like BBC, Reuters, Fox News, even our own English-language Times of India & India Today found the announcement of this “gau-mutra party” news worthy. The ulterior motive is hard to miss – to shame Hindus as ‘unscientific and irrational’.

Yes, the cow is deeply revered in Bharat and many believe that desi (humped) cow products – milk, urine and dung – have medicinal properties. Ayurvedic texts talk about the beneficial properties of cow urine and its distillates. There is ongoing research and patents have been obtained for medicinal properties of cow urine. Cow urine and dung is also used as a bio-pesticide. There is also much greater awareness of the health benefits of type A2 milk obtained from desi cows.

But do the majority of Hindus blindly believe that cow urine can cure Coronavirus or other serious ailments, as the media reporting suggests? Absolutely not. For Hindus, the cow is beloved & sacred because it is a loving, gentle animal which had a special bond with Sri Krishna, a cow-herd in his younger years. Any other benefits the animal may have, from its milk, urine etc is secondary – and there is zero social pressure on Hindus to accept cow urine as some miracle cure. The majority of Hindus do not have ‘cow urine’ parties, contrary to what professional Hinduphobes might have you believe.

Till date, no adverse effect of drinking desi cow urine has been proven, yet Hindus are slandered as ‘cow-piss’ drinkers by Indian liberals, Pakistani actors in UK, suicide bombers, Western liberals, and both Muslim and Christian fundamentalists.

If this is not reflective of the deep-rooted monotheist hate (and modern ‘isms’ like Commun’ism’, secular human’ism’ , liberal’ism’ etc. are just derivatives of Abrahamic monotheism as they all treat their central doctrines as the only true way) for ‘polytheist & pagan’ Hindus, then we don’t know what is.