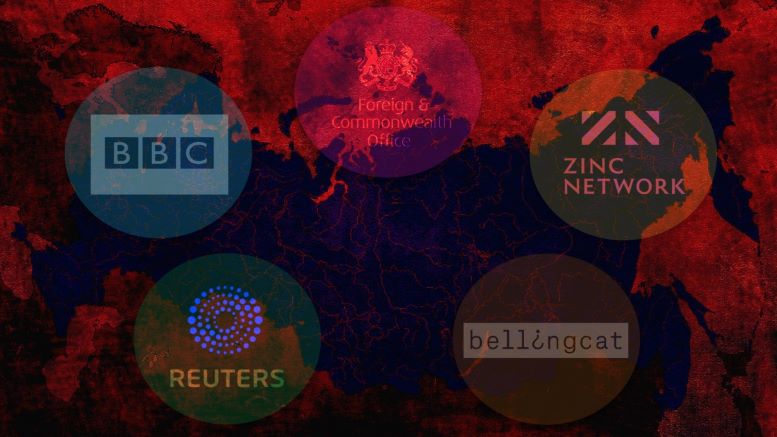 Western media is often portrayed as independent and objective. A report by The Gray Zone busts this myth and cites leaked documents to show how media outlets such as Reuters, BBC, and Bellingcat among others covertly participated in programs that were sponsored by the UK foreign office and aimed at weakening Russia.

It has come to light that Reuters and BBC were funded by the UK Foreign and Commonwealth Office (FCO) to conduct programs that would bring about regime change within Russia as well as undermine the Russian government across Central Asia and Eastern Europe.

Furthermore, as per the leaked documents, this was being done with the help of a shady department within the UK FCO named Counter Disinformation and Media Development (CDMD). The media organizations operated along with intelligence contractors and conducted training programs for Russian journalists in order to bring about an attitudinal change by promoting a positive perception of the UK among the participants.

“These revelations show that when MPs were railing about Russia, British agents were using the BBC and Reuters to deploy precisely the same tactics that politicians and media commentators were accusing Russia of using. The BBC and Reuters portray themselves as unimpeachable, impartial, and authoritative sources of world news, but both are now hugely compromised by these disclosures. Double standards like this just bring establishment politicians and corporate media hacks into further disrepute.”

The website also points out how UK FCO was earlier caught funding propaganda campaigns to garner support for bringing about regime change in Syria. Therefore, the UK FCO is actively interfering in the internal affairs of other nations using ‘independent’ media. This is a sinister plan in sync with what China has been doing across the globe.

The report further points out:

“The new leaks illustrate in alarming detail how Reuters and the BBC – two of the largest and most distinguished news organizations in the world – attempted to answer the British foreign ministry’s call for help in improving its “ability to respond and to promote our message across Russia,” and to “counter the Russian government’s narrative.” Among the UK FCO’s stated goals, according to the director of the CDMD, was to “weaken the Russian State’s influence on its near neighbors.”

Reuters and the BBC solicited multimillion-dollar contracts to advance the British state’s interventionist aims, promising to cultivate Russian journalists through FCO-funded tours and training sessions, establish influence networks in and around Russia, and promote pro-NATO narratives in Russian-speaking regions.

In several proposals to the British Foreign Office, Reuters boasted of a global influence network of 15,000 journalists and staff, including 400 inside Russia.”

The UK FCO even enlisted the services of supposedly independent, high-profile online media outlets such as Mediazona, Bellingcat, and Meduza. Bellingcat is believed to have intervened on behalf of UK FCO in North Macedonia’s 2019 elections favoring the pro-NATO candidate. One of the intelligence contractors, Zinc Network even boasted about its ability to activate a range of content to support anti-government protests inside Russia.

The documents expose the role of NATO member states like the UK in fuelling protests in Central Asian and East European nations and also brings the independence of Reuters and BBC into question. In a damning revelation, it has also come to light that Reuters was being secretly funded by the British government in the 60s and 70s to aid the anti-Soviet propaganda run by it. BBC was used by the UK government to make payments to Reuters in a secret manner.

Although both Reuters and BBC swear to stand by the principles of independence, integrity, impartiality, and honesty, the explosive revelations made by the leaked documents show that both agencies are involved in a non-transparent relationship with the UK foreign ministry to undermine Russia.

“Reuters claimed to have performed 10 previous training tours for 80 Russian journalists on behalf of the British embassy in Moscow. It proposed eight more, promising to promote “UK cultural and political values” and “create a network of journalists across Russia” bonded together by a shared “interest in British affairs.”

Reuters’ tender highlighted the institutional prejudices and interventionist agenda that underlined its training programs. Detailing a series of UK FCO-funded programs dedicated to “countering Russian state-funded propaganda,” Reuters conflated Russian government narratives with extremism. Ironically, it referred to its own efforts at weakening them as “unbiased journalism.”

Although the UK attempted to justify this intervention by stating that its purpose was to counter Russia’s intention of sowing disunity and disrupting democratic processes, the campaign laid out by CDMD was more aggressive and far-reaching than what Russia has been supposedly doing in the west.

It is also pertinent to note that BBC enlisted local media partners and influencers (YouTubers) to cultivate and grow pro-NATO media in conflict areas. It was what is known as textbook information warfare, arming broadcast media to turn the tide of battle in a protracted, grinding conflict.

It is even more alarming that these organizations implement media projects that propagandize British Muslims. In this regard, the website noted:

Previously known as Breakthrough, Zinc has contracted for the UK Home Office to covertly implement media projects propagandizing British Muslims under the auspices of the Prevent de-radicalization initiative. In Australia, Zinc was caught running a clandestine program to promote support for government policies among Muslims.

It has also been brought to light that these organizations enlist the services of local stringers, videographers, and reporters to influence media narratives and also carry out public relations on behalf of extremist militias funded by NATO member states and Gulf monarchies to destabilize the country as was evident from their actions in Syria.

Their modus operandi also includes garnering support for so-called independent outlets that take an anti-government stand and also manipulating Google search results in their favor while reducing the search visibility of government-backed broadcaster.

Considering the role social media plays today, it comes as no surprise that YouTube influencers were enlisted to covertly propagate the message of the UK and its NATO allies and activate anti-government protest content.

Zinc also helped the YouTube influencers “develop editorial strategies to deliver key messages” while working “to keep their involvement confidential.” And it carried out its entire program of covert propaganda in the name of “promoting media integrity and democratic values.”

This certainly amounts to unduly interfering in the internal affairs of other nations. Bharat must be wary of these so-called independent western media outlets as they operate covertly to undermine governments. As the article points out BBC and Reuters have been playing an aggressive role in demonizing governments of countries where London and Washington seek regime change.

This should be a sufficient enough reason for Bharat to up its guard against the western media as we have seen numerous efforts by them to undermine Bharat ably supported by Hindumisic Bharatiya media outlets.